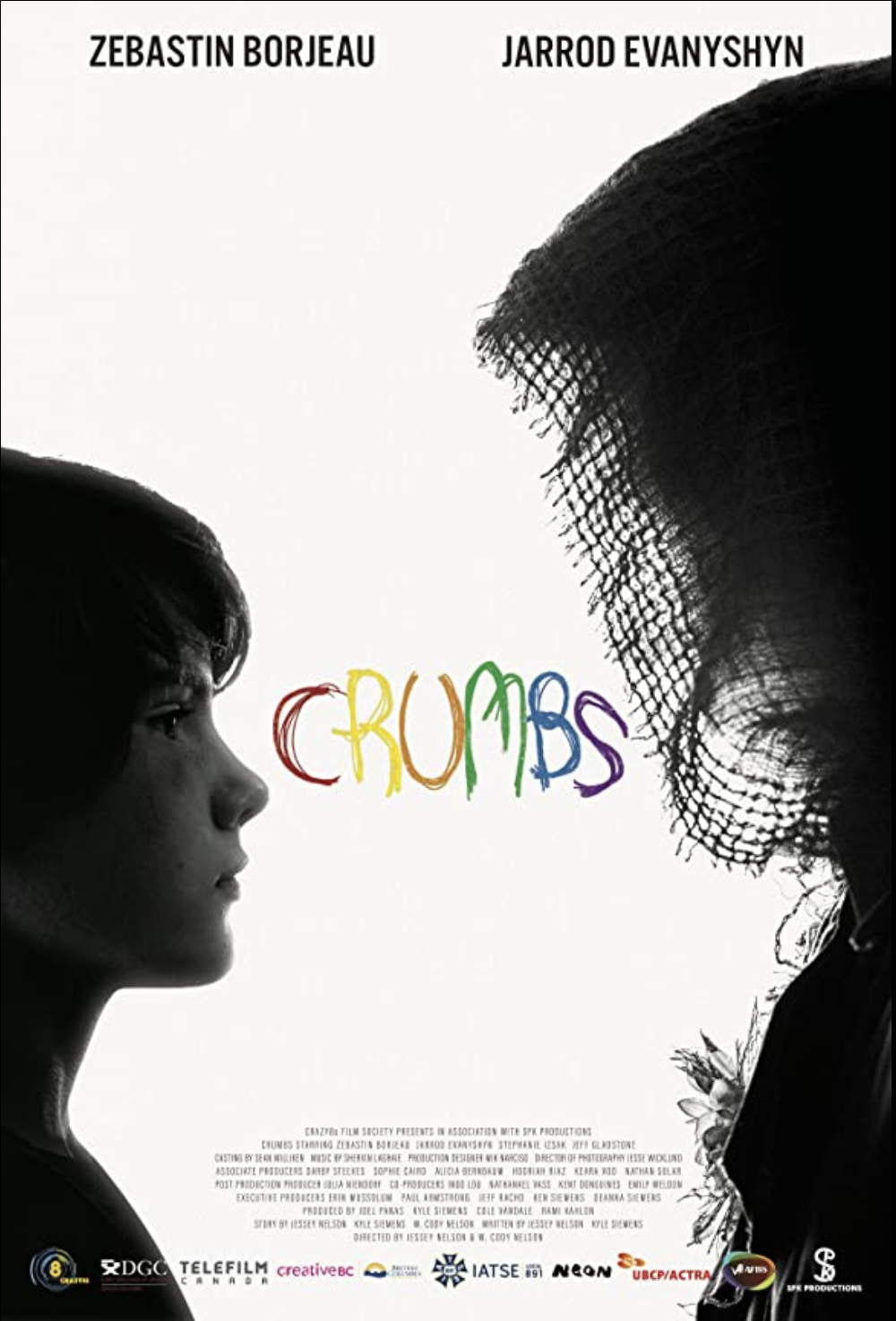 The Crazy 8’s is in town once again to challenge the brave, the creative and the confident. 8 films in 8 days, is it possible? Considering its inception in 1999, there has been no shortage of filmmakers rising to the challenge.

Here is an excerpt from the website… ‘Since 1999, Crazy8’s has given opportunities to 91 filmmakers and their teams of producers, writers, cinematographers, art directors, editors, composers, and cast, to produce fully funded, professional short films, and present them to an audience of film professionals in Vancouver (as well as non-professionals) and around the globe. It has become the place to discover new talent, provide valuable on set training, and give opportunities for filmmakers to create work that can be used to launch their careers in the film industry.

One such brother duo team of Jessey and Cody Nelson. Their company SPK Productions came together to write, direct and produce the film Crumbs, the story of a young boy who loses his father and creates an imaginary friend in order to deal with the traumas of his life. In addition to their film company, Jessey and Cody are also The Smashed Potato Kids, founders of a sketch comedy group. You can find them on Instagram, Facebook and Youtube.

I had an opportunity to speak with Jessey prior to the Crazy8’s event and he was exceptionally cool. A very funny guy with a creative mind that doesn’t stop, slow down, go to sleep – it just keeps pumping out the comedy and horror, which eventually meet in the middle.  We had a terrific chat about the film and this is how that went.

HNMAG “How did you come up with the premise?”

JESSEY “It basically started off as a way to get kids to eat their food. I was babysitting some kids and they weren’t eating their food, so I said Crumbs the clown is coming around and if your food is not gone, he’s going to eat you. The idea stuck around in my head and it grew and grew, but I wrestled with the idea of the clown eating the kids, so I thought I would do the opposite and make the clown help kids. That’s how it started.”

HNMAG “Congratulations on a great little film! After the Crazy 8’s festival, are you then able to submit CRUMBS into other festivals?”

JESSEY “Absolutely, after its premiere at the festival we’re allowed to take it back and make any adjustments, since it was made in 8 days, there’s a few things we could improve upon. The idea is to mold it and make it a little nicer for the festivals and then submit it for circulation for the next year.”

HNMAG “How did you find the time constraints of the contest?”

JESSEY “I think we dealt with it pretty good to be honest. I co-directed it with my brother Cody Nelson and he and I have a sketch comedy group called The Smashed Potato Kids. We produce weekly content all the time and before Covid hit, we had jobs. Basically, week to week we’d been writing a sketch and putting it out. One of the things we do really well is hustle, so we were able to bring a bunch of people from The Smashed Potato Kids to this experience to create CRUMBS. We had a lot of hustlers on our side and people that were down to getting it done. It was a fun/great opportunity to bring along people that we really loved and cared about. We made stuff really quickly and efficiently.”

HNMAG “Have you entered a Crazy 8’s event before?”

JESSEY “No I haven’t and to be honest, I wasn’t aware of the time constraints until after I’d already been accepted (laughing). I just saw ‘film contest’ and had a good idea, so I entered it and here we are.”

HNMAG “What size of a crew were you allowed to use?”

JESSEY “The maximum was 28 because of covid restrictions.”

HNMAG “Did you know everyone on the crew?”

JESSEY “We knew a big chunk of them but some of our people are working on professional sets and our DOP brought a crew with him, so there were some nice people I was able to meet, which was a great experience. It was a good mix of friends and new friends.”

HNMAG “Did you also co-write this with your brother?”

JESSEY “I co-wrote this with my friend Kyle Siemens and my brother and I co-directed it.”

HNMAG “In terms of genre, do you want to stick with horror?”

JESSEY “It’s funny because I generally come from a sketch comedy background but I’m also a huge fan of horror and feel like there are a lot of parallels between the two universes. You’re building up to a punch line in a joke but you’re building up to suspense in a horror film. I think they’re a lot of similarities and once and awhile, our production company will dabble in horror and we’ll do horror film contests as well. I personally would like to be in any genre my story fits in. I have a lot of ideas and it just depends on how I’m feeling. I don’t want to be stuck to one genre but I’d say comedy and horror are my strengths.”

HNMAG “How long have you been doing the sketch comedy?”

HNMAG “What is the attraction to sketch comedy?”

JESSEY “I tried to do stand-up for awhile but found that I’m more of a sketch comedy fan. I love SNL (Saturday Night Live), Kids In the Hall and think it’s really cool to get together with a lot of funny people and writing a ridiculous concept and funny idea, then having fun filming it.”

After the festival, in addition to other festival submissions, they will be using it as a ‘proof of concept’ film to help finance a feature version of Crumbs. There was even an earlier, shorter 15 second version of Crumbs that was submitted into a previous contest. Crumbs seems to keep evolving and it will be interesting to see this thrill ride in its full glory.