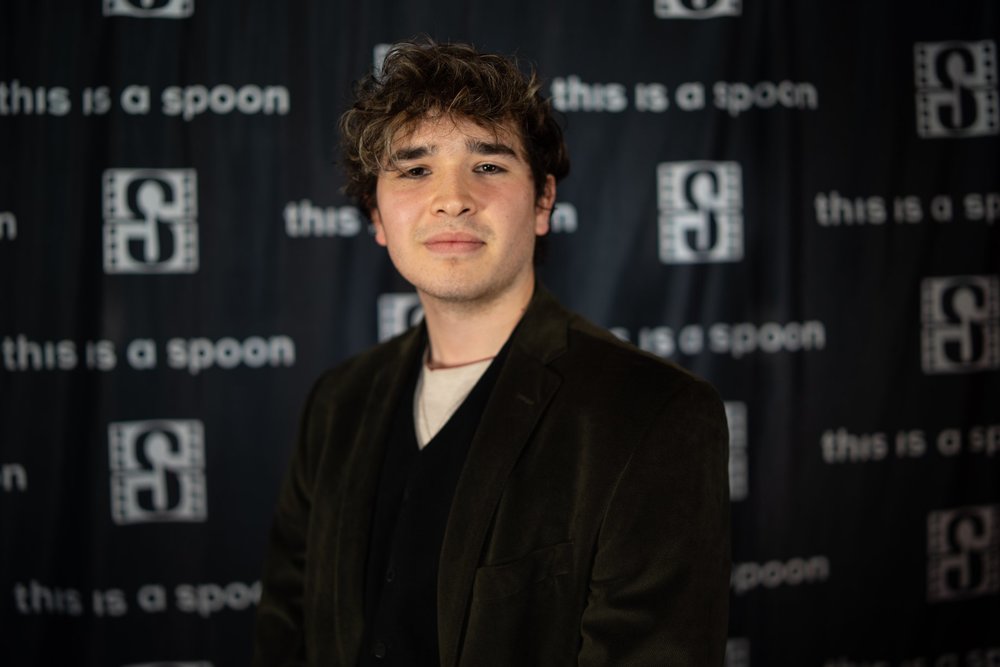 The Crazy 8’s were in town last weekend and it was virtual, but that means you got to enjoy it from the comfort of your home, in your comfy shorts with your best snack… and you didn’t have to worry about parking! Certainly, this year has brought us many virtual film festivals but Crazy 8’s truly stands apart from all the rest. Making a film in 8 days is an incredible feat, even for the pros. It’s challenging, it’s daunting, it’s chaotic but it is also so rewarding, exciting, life altering and career changing.

The film, Cuello is an entry from writer/director Sebastian Ortiz Wilkins. He co-wrote it with Moheb Jindran and it was produced by Allen Xu and co-producer James Mattagne.

Sebastian began acting in Indie short films in his hometown of Guadalajara, Mexico and began writing and directing his own projects at the age of 15. He then moved to Vancouver BC, and has since directed more than 8 short films, 1 web series, and numerous music videos. His surrealistic storylines have always attracted attention, garnering awards at the 2019 Mighty Asian Movie-Making Marathon and the 2019 Los Angeles Independent Short Film Festival, as well as being selected as a judge for The Berlin & Beyond Film Festival. Sebastian continues his dream as a Filmmaker and has graduated with a degree in business at BCIT in Vancouver, BC.

I had the tremendous opportunity to speak with Sebastian prior to the live event and this is a snippet of that conversation.

HNMAG “Your film is about a kidnapped family man whose life hangs in the balance, as a pair of highwaymen decide his fate. I’ve heard that his story is based on true events?”

SEBASTIAN “Yes that’s right. This is what happened to my father. We were really inspired to tell this story about the situation that happened on Feb. 16, 2011. We wanted to send a message that this is not just my fathers story, but it’s something that many families go through daily in Latin America and Mexico. Although this story is tragic and it tells my dad’s inspirational story, we also tell the side of the kidnappers and why they do it. We try to understand that these people are not monsters and they have a human side. After they play their role, they go back to their families and have dinner. They do this for reasons of economical survival. They’re forced to do these things unfortunately.”

HNMAG “Would this be because of a corrupt government?”

SEBASTIAN “This is a big part of it. There are some places in Mexico where you can find yourself in the wrong place at the wrong time and you can run into these kinds of people. Mexico is a beautiful country with a beautiful culture but there are certainly some ups and downs when it comes to economic status. When you’re far from the city and trying to survive, there’s lack of work, so they try to immigrate to the US and when they can’t they have to stay in Mexico and turn to a life of crime by opening up this industry of committing these tragic acts. To them, it’s not a crime – it’s just their work.”

HNMAG “This is an amazing film. The images were so well lit and the directing was spot on. What did you shoot it on?”

SEBASTIAN “We were using an ARRI Alexa Mini. We were very happy with how it turned out after all the hard work.”

HNMAG “You’re known for telling surrealistic stories. What drives you to tell those types of stories?”

SEBASTIAN “When I start writing something new, I’m always thinking of how to grab the viewer’s attention at the beginning of the film. I believe the first scene in the most important part of the movie because it’s where the audience will get attached to the character, location and atmosphere. I believe a touch of surrealism and the way you structure the narrative is important, as you can see in Cuello. It’s all over the place but it has a very precise and complex structure. When you look at it on paper, the scenes zig zag but it all makes sense. I fell in love with telling a story this way and when you have these elements of surrealism, such as the little old lady in Cuello. It’s the cherry on the top when it leads to more questions without really knowing what’s happening. That’s when the audience becomes invested in the story because they realize they have to pay attention, they become attached to it and more alert – which is what you want… to make that connection.” 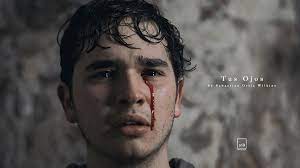 HNMAG “You did a terrific job directing this film. Does that come from your experience, directing 8 short films previous to this one?”

SEBASTIAN “I think it’s all about making mistakes along the way and learning from that. I’m very happy and proud of all the other projects even though they don’t have the same quality, there is something unique about each one. I learn something new with every project I do and I bring it to the next one. I learned something very important in this film and all my past productions – that it’s not necessary to cut, cut and cut, coverage wise. You can have a steady wide shot and go. If the scene works out and everything looks good in the frame, it’s not necessary to have multiple cuts.”

HNMAG “Do you find that you prefer longer shots?”

SEBASTIAN “Yes, I had a lot of fun doing that in Cuello. We cut a lot of times to build tension but then there’s the scene at the house with the family, where we can let it be and stay with the characters in an intimate setting and keep rolling.”

HNMAG “I think you’re on the road to becoming a great director. When can we expect a feature film?”

SEBASTIAN “Thank you. I’m actually working on it right now. I’m writing a project and I’ve been talking to my producer about the pitch process. The working title is, The Creature That’s This Colour. I think a feature film will be the next big step for all of us. I believe we have the strength and the experience to make something like that happen.”

HNMAG “There is a road sign in the film that points to Mexico. Where did you find that sign?”

SEBASTIAN “Actually, there was this guy in Vancouver that owed my producer a favour, so that car passing by is full of visual effects. We set it up at 7 am in the morning and it was raining. There was only the DOP, me and a PA driving the car. We set up the sign, it looked great so I told him – before we take the shot, take a picture with me with it. After he took the shot, the sign fell and broke apart. Because it was raining, there wasn’t time to fix it, so we taped it up but it wasn’t that steady when we stood it up, so I laid down to act as a sandbag to stabilize it. Cars were driving by, it was raining and we tried to get the shot but the car stopped working, so we had to get another car and change the scene in the script to use the kidnapper’s car. It was a disaster but I’m glad it worked out.”

HNMAG “Was it very difficult to make the film in 8 days?”

SEBASTIAN “Yes it was. I was very stressed about the 3-day shoot. We had a lot of footage to shoot with a lot of locations. Thank god we didn’t lose anything. I was so tired from the 3 days of shooting that I thought I would go home, have a shower, take a nap then call my editor. I had no idea that those 5 days of editing would be the craziest 5 days of my life. I didn’t have a shower for 3 days because I couldn’t leave the studio with the editor. We were seriously working 24-7, honestly for 3 days straight. After that, it was adding the sound, colour correction, and music. I love to do this, so I’m not complaining but I wasn’t expecting that intensity. I believe the 5 days of editing was crazier than the 3 days of shooting.”

HNMAG “Did you already have your own team/crew together that you could call upon for help?”

SEBASTIAN “I have 2 teams that I work with. Once we got the approval from Crazy 8’s I called the team up with James and Bernardo and we assembled together, better than the Avengers. It was great to be able to combine these 2 worlds of amazing people and slowly, we were bringing more people onboard. There were so many amazing people supporting the project.”

HNMAG “You had co-written this with Moheb Jindran. How did you both come to work together on this project?”

SEBASTIAN “We had met a few years ago in film school. We didn’t really work together until we entered a film festival with our short film, Checkmate. We won an award and then entered it into VAFF (Vancouver Asian Film Festival). That’s when I really started working with Moheb. He did an amazing job co-writing it and I need to say thank you to Santana Martinez for all his support as well. He’s also an actor and we were acting out the scenes to see what works and what to leave out. We worked on blocking and I even had some Lego cars to see how it would look and if it would make sense. It was great.”

HNMAG “How long did it take to write the screenplay?”

SEBASTIAN “We did the pitch in October and once we were chosen as a top 40 finalist, I started to write about how we could pitch it. After that we started writing it in December to February.”

HNMAG “If you win the Crazy 8’s, who will you thank the most?”

SEBASTIAN “For me to shoot the film was the prize. If we win, I mean – the team, the producers, the people that supported us and the people that were following the project and looking forward to it, along with the entire crew. I really have to thank the entire crew. I also need to thank my father, for the fact that he allowed us to use his story to show the world that things like this are happening outside of Canada. We have to be grateful to live in Canada, where we live in a beautiful place and our families are safe and we can travel without any risk.”

HNMAG “I imagine that you are sending this film to other festivals after Crazy 8’s?”

SEBASTIAN “Yes, we’ve already sent it to Cannes and TIFF, then VIFF and the Whistler festival, along with a lot of film festivals in Mexico. We’ll have to see how things go with Covid – it would be nice to have some live screenings. It’s unfortunate that we lost the gala this year but we are excited to share this film with the rest of the world.”

I think Sebastian is well on his way to becoming a great writer/director and I cannot wait to see what this incredibly creative and ambitious filmmaker shoots next! Till the day happens… Action! 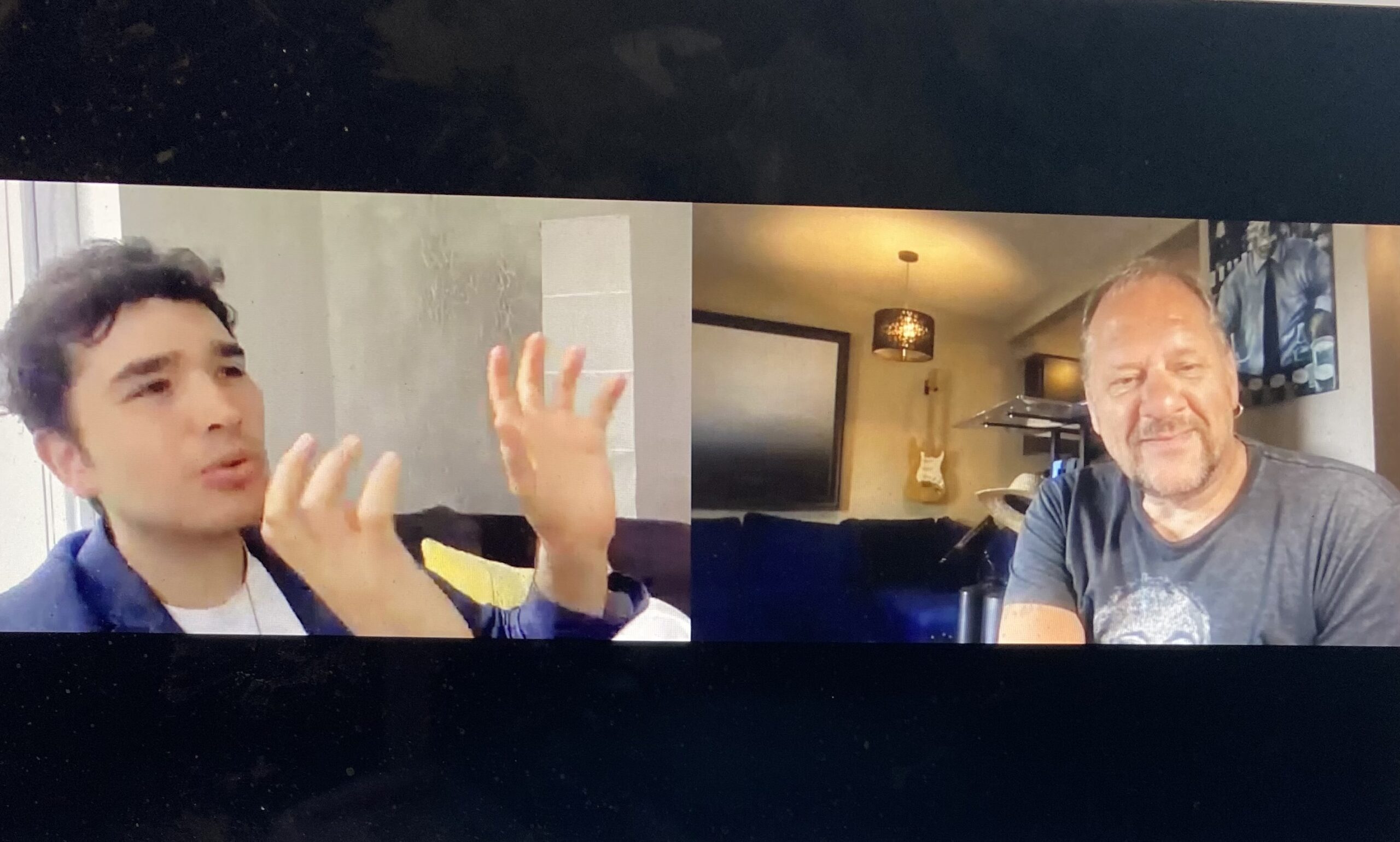