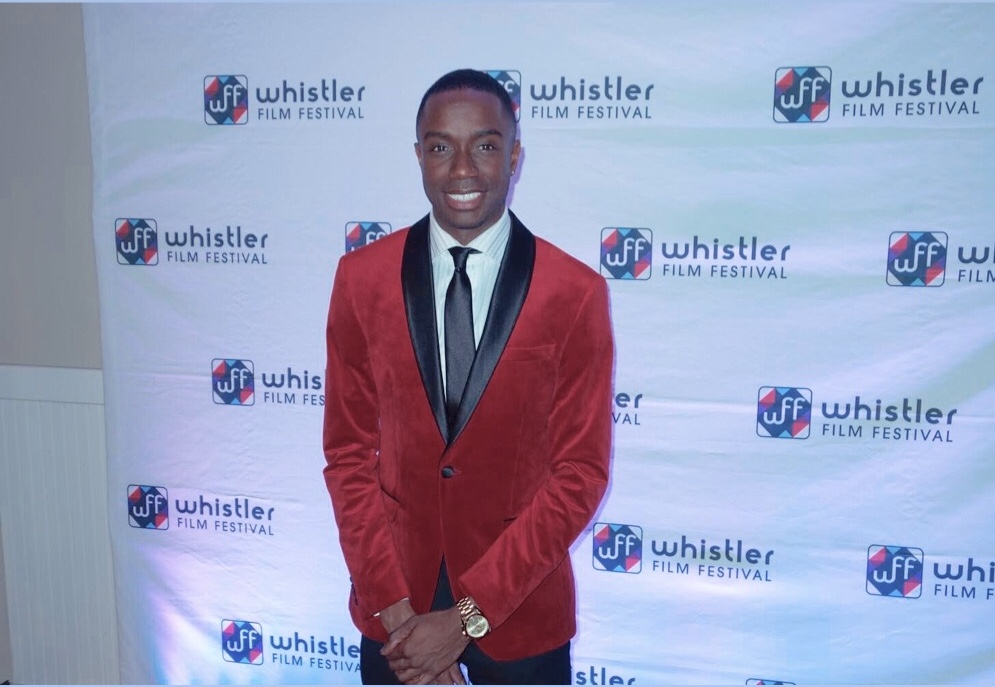 It’s not everyday that I find myself up in Whistler surrounded by mountains, skiers and filmmakers from across the country and the globe. The Whistler Film Festival is unique in its make-up, its content and its events. If you’re not feeling the love, you must’ve gotten locked in your room. There is an abundance of networking, card trading, film screenings, fine wine and amazing atmosphere. It is in a sense, a Hollywood town for one spectacular week.

While there I had the tremendous opportunity to speak with some up and coming actors that are part of the Stars to Watch program, which focuses on great new talent promoting films at the festival. I was very fortunate to have the opportunity to speak with four of the Stars to Watch and my next guest was an amazing young man Marc Senior who was there to represent his film In God I Trust, written and directed by Maja Zdanowski.  We asked him all about the film and his character. We got some great answers.

“When did you first become involved with the film?”

“In the spring of 2016 I officially booked the part but we didn’t start filming until the end of the year. A colleague of mine that I had worked on a series of films with had known the director and producer. They were looking for a specific type of actor for this role and he said I’d be great. They contacted me directly through email and told me they wanted me to audition for it.”

“What character do you play and what is he like?”

“I play the lead character Ben White. We follow Ben through a very long bad day where a lot of tumultuous things are happening to him. For the vast majority of the movie I’m by myself in a car. You can hear me having phone conversations and interacting with people throughout the film. He’s very distraught and it has a lot to do with what’s happening in America today. It has a lot to do with gun control, suicide, racism, religion and follows four stories; mine happens to be the main story but they all eventually intersect.”

“Can you explain a bit about Ben’s story?”

“We follow Ben as he leaves work and is trying to come to grips with things he’s struggling with as well as meeting those things in life. He’s having a race related issue with a person at work and he feels like he may have lost his job because he’s black. He ends up running into a white supremacist where a contentious interaction takes place that’s built up from his own personal anger because he’s struggling in life. He’s struggling with his relationship with his girlfriend and this is the seventh job he’s lost. They also have a kid together that he’s trying to support. He’s just trying to be a man and hold a job but he can’t even seem to do that.”

“Knowing racism is more prevalent in the US than it is in Canada, was it difficult to get into character?”

“No, actually with this character, a lot of what you see in the movie I’ve personally experienced in my life. It was one of the motivators in wanting to play this character. Being a black man I related tremendously to the character because I’ve had several jobs as an actor, whether it was bartending or serving.  So I understand about having a job, losing jobs, the girlfriend and trying to pay the bills but then you add the context of feeling like you lost a job, not because of your merit but because of your colour. It can be frustrating when you feel those subtleties of racism. In the film, there are some subtleties but there’s also some overt stuff. There are a lot of things that make me relate to this character for sure.”

“The film shot over a year and a half but in all I did 10 days of filming. The tricky part was doing 4-5 days of filming in Dec. of 2016 then in April of 2017 I did another 4-5 days and finally in January of this year I went back to do a few more days. I’ve had to live with this character for over several months so it was a bit tricky to get back into character every time. It was a process and probably the biggest challenge I’ve had as an actor so far.” “What would you say is the overall message in the film?”

“I think the message in the film would be awareness. I think that people on the US side and even in Canada to a certain degree are really caught up in Trump. Chances are I’m never going to meet him but I will be meeting people at coffee shops, the gas station or grocery stores. For those that follow those types of ideologies it becomes kind of scary for people like myself. With this film, it’s my hope that people will continue the discussion because we see regular everyday people dealing with regular everyday circumstances and I hope when people see it, it’ll come across as being a little more human in comparison to putting it on a la Trump. It’s more so about the relationships between people. My hope for the film is that we’re a lot more closer than we think.”

“Do you know if this script was adapted from a book or was it completely original?”

“As far as I know it is original and based upon the Maja’s time/perspective living in the US as a Canadian and seeing what’s been happening in the last few years. So it’s based/inspired on everything he’s observed and seen over there.”

“How do feel about playing a character that has to deal with constant racism?”

“I think it’s super important and I feel honoured to embody a character that is going through things I’ve personally gone through in my life. I’ve sat alone in my car wondering why I didn’t get a particular opportunity or understanding that I didn’t get certain things because of the way that I look. To be able to tackle personal issues within myself while doing that through a character was personally satisfying. To be in front of the camera and act and figure out certain things that apply to my everyday life is a double bonus. Going forward I hope to play more characters like this with an arc that can help myself as well as others.”

“At what age did you get the acting bug?”

“At the age of 13, I call it the voice that said to me, I needed to be an actor. I had no idea of what an actor was. I’d seen people on TV but I used to think they’re special because they were on TV or living in Hollywood. My mom had accidentally brought me to a stand-up comedy act. There was swearing and bad language but we had already purchased the tickets. After the show I began to think that it was something I could do. I was funny and a bit of a class clown, so I did stand-up from 13-26 yrs. old in the hopes of becoming an actor. After high school I realized that there were schools for acting I enrolled into theatre school at 19 and graduated from College. It gave me the discipline I needed. I’m glad I listened to that tiny voice.”

I’m also glad Marc Senior listened to that voice. He’s a passionate actor that loves to perform. He’s also a black man that deals with racism throughout his daily life. Films that have the ability to throw societies dirty laundry into or faces is important, especially given todays political climate. I still like to believe that one person can make a difference. We just need to believe that we’re the ones capable of creating positive change and quit waiting for a hero to come along to lead us. Can’t we all get along?