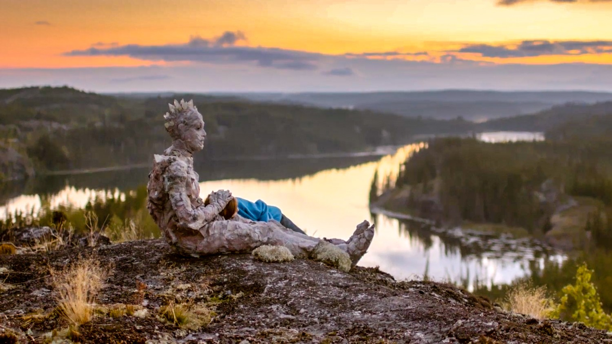 It’s not easy being a family film in the 21st Century. With market pressure to pack as much sound, colour, attitude and toilet humour as possible into nearly every PG release, the search for quality kid-friendly fare seems to grow ever more elusive. Imagine my surprise when out of the normally adult-centred, hard hitting topical films that the Whistler Film Festival is known far comes the sci-fi adventure gem Elijah and the Rock Creature.

After losing his astrologer father (Joel Maillet) to a cabin fire, young Elijah (Ben Naugler in his screen debut) now lives in Yellowknife with his overprotective mother Carolyn (Allie Dunbar). Neither has even begun to get over the loss with frays beginning to strain their relationship. When his fun-loving Uncle Jamie gifts him with tickets to a stargazing festival in Wood Buffalo National Park, Elijah convinces Carolyn to make the trip.

Things quickly unravel when Elijah wanders off at a rest stop and promptly loses himself in the northern wilderness. He’s far from alone however as he soon happens upon Etanin (Thompson Duff), a cosmic rock-like creature who has stopped over on earth, but now can’t find his way back home due to the stars having shifted after a 4000-year nap! As Carolyn tries desperately to navigate the brush in pursuit of her lost son, Elijah and Etanin must each use their special gifts and knowledge to help each other get home.

What can I say? Elijah and the Rock Creature is a warm, fun, well-told adventure story as well as a fulfilling spiritual journey to boot. The film was likely produced on a fraction of the budget of  films that inspired it, but lays it all out on the screen with winning cinematography (the rarely-seen Northwest Territories has likely never looked better) and excellent creature makeup through which Thompson Duff’s warm and sympathetic performance as Etanin superbly shines through.

The film has a lot on it’s mind regarding family, loss, the grieving process, and finding our place in the world. It manages to convey all of these without ever talking down to it’s audience, whatever their age. Director Jennifer Walden handles her feature debut here with vision and confidence that shows promise of a rich future filmography.

Elijahfurther makes use of it’s splendid visual palette with a stunning mix of animation, VFX and location work which will hopefully prove to the rest of Canada that far more than just tundra lies North of 60. The film doesn’t straggle sonically either as the award-winning* score by Giovanni Rotondo carries us elegantly through the films swift 80 minute runtime.

I would be remiss if I failed to mention one curious flaw in the film. While Naugler comports himself well as the curious and insecure Elijah, he performs the role in what I assume is his natural European accent. This wouldn’t bother me if not for the fact that he is apparently born and raised in Canada’s north with none of his family members sharing a similar accent. It’s a curious oversight that if not an issue with casting could have been explained by a throwaway line.

With a solid story, cast, visuals and heart going for it, Elijah and the Rock Creature knows just what notes to hit and when, promising a fun time at the movies that will leave you smiling when you exit the theatre. Highly Recommended.

*Winner of a Silver Medal at the 2018 Global Music Awards.