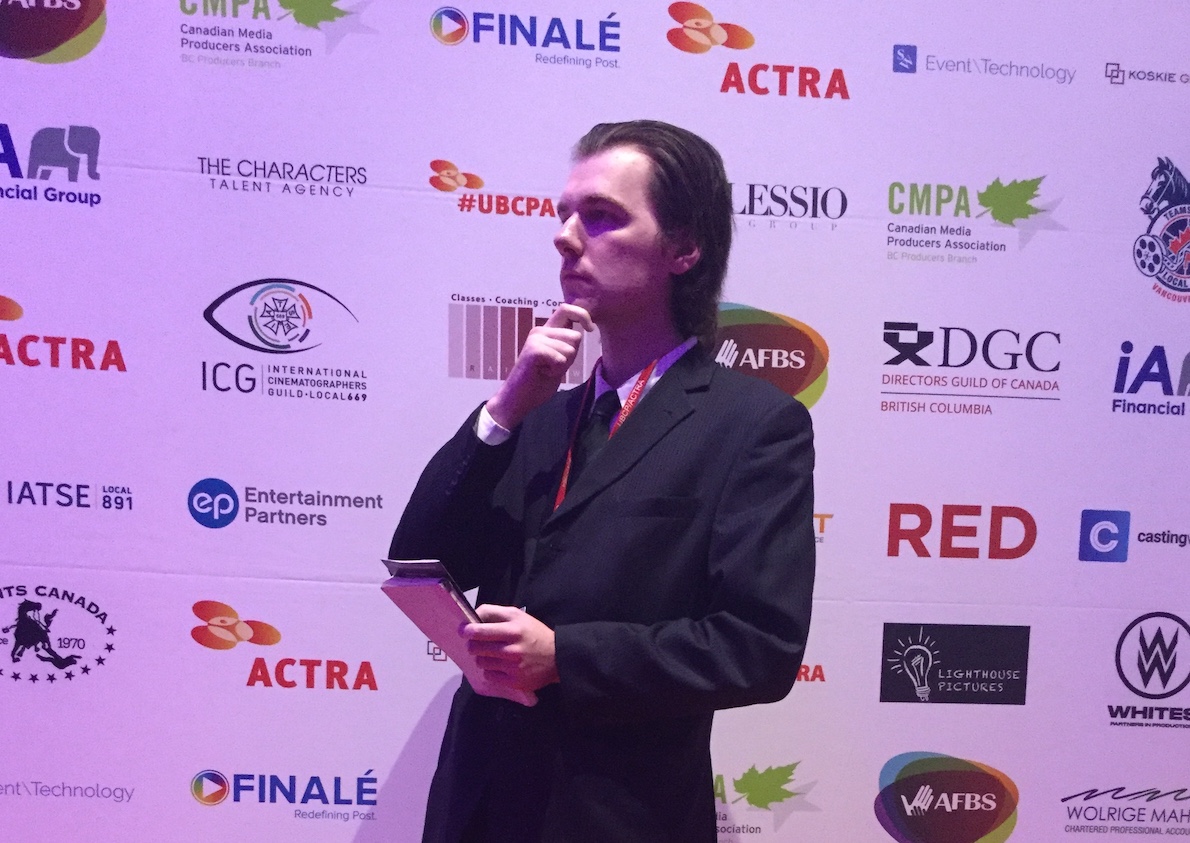 Of all of the many awards ceremonies that happen through Canada, I’m lucky that some such as this one happen right here in Vancouver. Nothing brings together some of the big names and high-ranking BG members of Canadian productions better than the UBCP ACTRA awards. Preparation may have taken some time and the place was pretty crowded, showing just how many people are union-designated (quite surprising if you ask me). But anyways, like all awards ceremonies (which I don’t attend too many of sadly) this one was a lot of fun to attend and a great event to see, even meet some of the greatest nominees and biggest names in the biz. So let’s get in to detail.

That’s what all awards ceremonies have, a red carpet and a long stretched out wall of sponsors who made said ceremony possible. Due to my simplistic approach, I was at the way end of the lineup but I did get to talk to some of the nominees, and at least one winner. I’m sorry to say some of my selected interviewees didn’t make it through and those people were actually winners that night, but I still got some great words. Michael Daingerfield (nominated for the Tinkerer in Marvel Superhero Adventures) himself has described the Awards as “There’s a great energy in the room, and everybody’s happy to be [at the ceremony] to celebrate the great work that everybody does, whether you’re nominated or not.” Taylor Hastings was rather excited to have been nominated saying “I feel like it’s an invitation to be a part of the community in a great way!” as she had been nominated for her lead role in The Ride Home as Best Emerging Performer, a short film she wrote and produced as well as starred in. Talk about a triple threat (ha ha). Sonja Bennett nominated for her role in Kayak to Klemtu connected to her character through her emotions and the fact that she’s not too athletic. Sonja learned a lot on the go during her exhausting role, and said she’s very proud of it being one of her best roles yet.

These are just a few choice words from some people I talked to on the red carpet, because there was so much more going on. Like every great evening for awards, there was a brilliant buffet of tiny foods, lots of other great people attending including Mackenzie Gray and the Robbins twins (Well-Known celebrities in Vancouver), and so much more. From what I’ve seen, the bottom level of the Vancouver Playhouse was jam-packed itself, even more than the upper level. Good thing I stayed upstairs until the ceremony.

Eventually, the celebrities stopped walking the red carpet and it was time for everyone to find their seats. I was seated somewhere near the back right next to the aisle, but the important thing is I still got a good view. Even if that view was slightly obscured by a guy taller than me. (I don’t see that often) But everything that happened at the start was quick and simple. To start it off was a quick preview showcasing some material that got made locally followed by a speech by Keith Martin Gordey who blazed right through his opening words for the convenience of the audience. After another preview, the ceremonies’ official host Jay Brazeau arrived on stage to provide lots of enthusiasm and a plethora of jokes about film set work and his personal life causing different reactions. Jokes ranged from Hallmark’s style of moviemaking to people who become listed as weekly stars and he even made shoutouts to individuals he knew in the industry. Now there wasn’t too many awards but there were quite a lot of presenters. To start it off, the 1st presenters were Richard Harmon and Maya Are who presented the award for best emerging performer to Daniel Doheny. After them came Catherine Haggquist and Rob Labelle who announced the award for Best voice, which was gained by Sabrina Pitre. Now, I managed to speak to her beforehand, and Sabrina had quite the story to tell about her way into voice acting. Sabrina had gotten into voice acting roles easily due to her doing silly voices around the house as well as the fact that her husband was a voice casting director. She was quite surprised to be nominated despite not being classically trained, and even more surprised when she won. I was rather impressed myself. I guess it goes to show you don’t need all the basic training and know-how to become a voice actor, as long as you’ve got some amazing range of voices with emotions to throw into them. Now, things were brought in a more serious state after this as we were treated to an In Memoriam section featuring a slideshows of deceased union actors while a sad song played by a duet was on stage. It was a sad song from the great Canadian movie, Kingsway, a personal favourite of mine. After that, Mayumi Yoshida came up to present the Lorena Gale Woman of Distinction Award to Jennifer Clement followed by a video tribute by Jennifer’s family and friends and a motivational speech by Jennifer herself regarding equality in the industry which had the audience giving her a standing ovation before and after the speech. Next was the Best Stunt presented by Adrian Holmes and Teach Grant, who started it off with a quick little comedic conversation about accidents that can happen when you do your own stunts. In all seriousness, leave it to the professionals, especially if it’s jumping off a bridge or getting into a car accident on set. Speaking of, The Best Stunt was awarded to Brett Chan who coordinated a car crash stunt in Darc, along with performers Andrew Chin, Mark Chin, and Gerald Paetz. Sadly none of them were able to attend (I was hoping to interview Brett), but a good friend of Brett’s accepted it on his behalf. And he was also attending for the booze. After his long acceptance speech along with a selfie-video he recorded, it was time for another super exclusive award: The John Julian Award of Excellence. Presented by Bruce Crawford along with an AFBS skit listing the benefits of working union, the award was received by Lauro Chartrand DelValle, who also provided a speech worthy of standing ovations. Now, it’s time to move on the final awards of the night, because even Jay wanted to go party. The Best Actor Award was presented by Brendan Fletcher and Rekha Sharma, who announced the recipient (we don’t say winner or loser in this neck of the woods, folks) was Bob Frazer, who was out working on another set in another town (another missed opportunity for me) but a friend accepted it on his behalf as well giving quite the explanation for Bob’s absence and even recited a speech Bob wrote if he could’ve been there. While I didn’t see Bob that night, he certainly showed some favour to the friend accepting on his behalf, as per the speech. And finally, Aliyah O’Brien and Jewel Slaite presented the award for best actress and a quick show as well while Aliyah gorged on a bag of fries (one of her hidden talents according to Jay) and then finally presented the award to Karin Konoval, for her role in the X-Files – Plus One. I have to say I am very pleased with all the winners and especially all the nominees who made it out on this particular night. Following the awards was a party of chatting, eating, and photographing some more. Or less. Downstairs was congested once again and upstairs had Zak Santiago providing super cool music, a lot of people you could chat with (not as many as downstairs but that was quite a weave) and a buffet where you had to pay. At least I satisfied my hunger with a mini-bacon and cheese slider presented by someone walking along. Delicious!

The Awards ceremony was one of the greatest I’ve attended this year. I hope to attend next year, and who knows? Maybe by then, I’ll have union status myself, if I get any more BG work coming to me. I’m making it big!