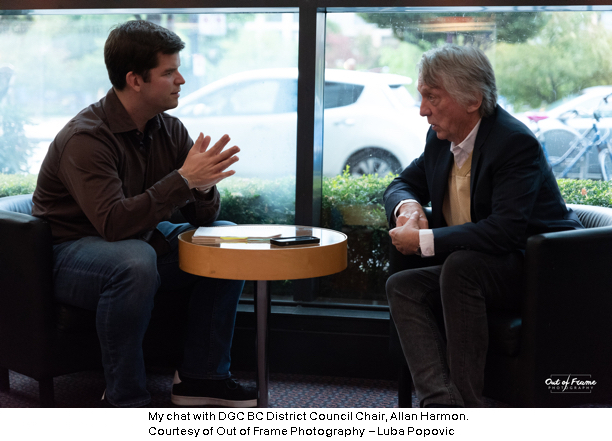 With the Vancouver International Film Festival (VIFF) only weeks away, a new annual event has sprung up on our fall calendar with the Directors Guild of Canada BC District Showcase Weekend (say that five times fast!). Held over the weekend of Sept 7-9 at the Vancity Theatre, it was a chance for the guild’s members to have their films shown to old and new audiences as well as mix and mingle with friends, colleagues and fans.

“We’re at the centre of it” says District Chair Allan Harmon about the guild’s role in BC’s film industry. “All the unions (including IATSE, ACFC, etc.) are at the centre of the success of the industry. You’re never going to see the film and TV business being successfully run outside the realm of professional technicians and filmmakers.”

The weekend kicked off with a celebration a key department of these professionals in Keepers of the Magic, Vic Sarin’s 2016 doc that shines a light (pun intended) on the great masters of cinematography. This was followed by Anne Wheelers 1989 shot-in-Alberta classic Bye Bye Blues, a riveting wartime drama punctuated by a toe-tapping jazz soundtrack.

“I fell in love with Vancouver” muses American expatriate Rachel Talalay, whose punk-fueled 1995 cult classic Tank Girl (complete with mutated kangaroos) screened on Saturday night to a receptive audience. “Vancouver is an excellent place with brilliant crews. Right now, too much time is being spent catering to American TV. We really need more Canadian content done here as well.”

It’s a sentiment echoed by Crazy 8s-alumni Zach Lipovsky. “If you live in BC and want to direct, you haveto maintain a presence in LA. Not a show goes by where at least one person on the crew doesn’t assume I’m American” he tells me during our phone interview prior to the event. As the province of BC has historically developed it’s film industry as a virtual backlot for Hollywood productions using local labour, Lipovsky stresses the need for more locally-initiated projects. “There needs to be investment in above the line talent; writers, directors and so on. Most productions are just one tax credit away from disappearing.”

There certainly isn’t a lack of creativity on our shores as evidenced by Richard Martin’s documentary Backbone, an entertaining look at Vancouver’s experimental film movement of the 60s and 70s. The film examines a period where maverick artists would manipulate images and sound with reckless abandon and no regard for any rule book, written or unwritten. All of this took place long before the region came to be known as “Hollywood North.” Our industry has gown up in many ways, but still has far yet to go. “The crews here are the best in the world” Martin tells me during our sit-down. “The infrastructure is there and people here love the cinema, so I see nothing but good times ahead.”

The event was well attended and I hope to see it continue in future years.  While VIFF continues to chart new course for BC film and beyond, The DGB-BC showcase has the potential to help keep past work in the province in the public eye. After all, the images may seem fleeting, but they need not fade away.