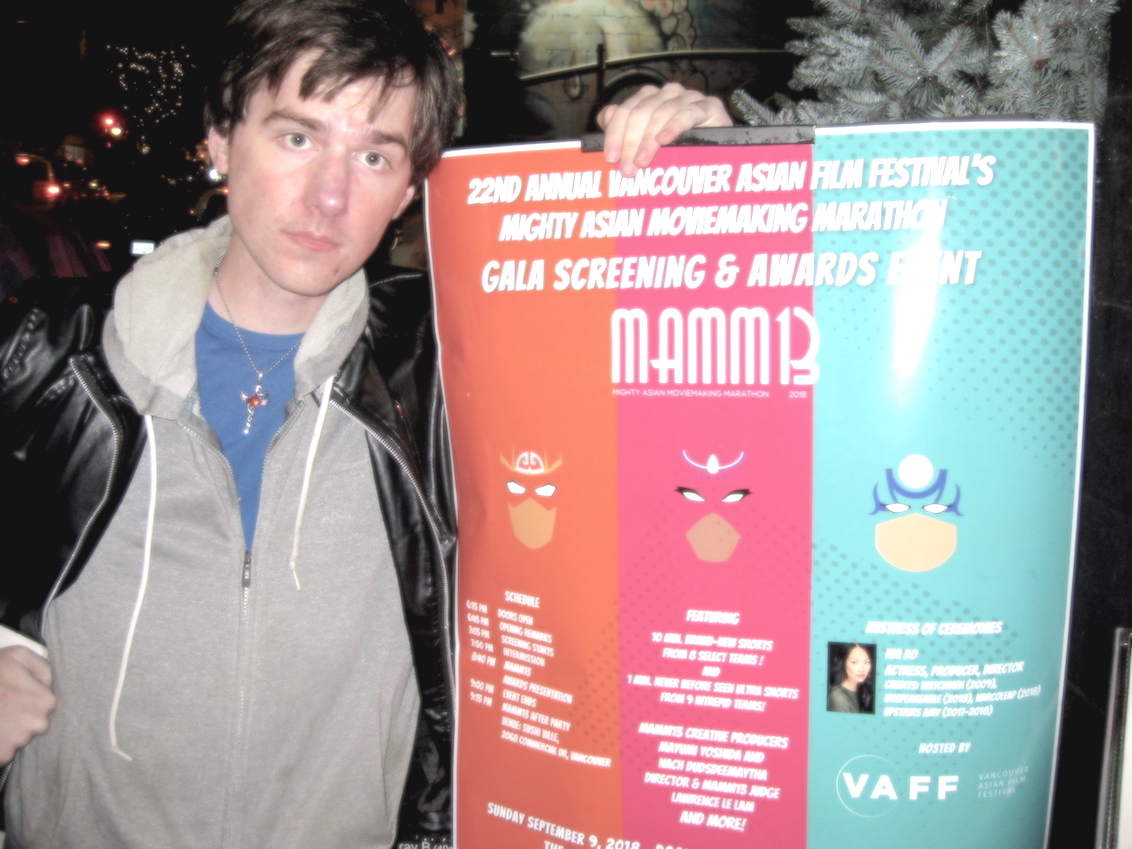 Nothing is greater than a local film festival. But sometimes a local film festival becomes even more interesting when it brings a certain element of its city into it and centers the whole festival around said element. For example, Vancouver Asian Film Festival. Vancouver has a wide majority of Asians, which provides a good amount of variety of Chinese, Japanese and Koreans. But before we get into VAFF, I’d like to discuss an event that comes up earlier. A pre-VAFF event if you will. The Mighty Asian Moviemaking Marathon, or it’s shortened term, MAMM. MAMM showcases itself with a bright colourful poster as a way of indicating how filmmakers are superheroes. Honestly, I’d like to see a film about super filmmakers instead of all these modern-day Marvel reboots, it would probably be much cooler. But anyways, this was one of the most packed events of all time. The Rio never shies away from having excessive clusters of people filling in every single seat and having a line that nearly stretches across two or three local businesses, but luckily never wraps around a corner often. The lineup to this one seemed a bit disorganized given moviemaking teams were packed together like sardines but sticking out the sides like cream filling. A fair amount of chaotic chatter as well. After a 15-minute delay in waiting (and getting tickets scanned outside) everyone finally managed to make their way in and fill up as much space as possible. And by that, I mean all the space. It’s been said they’ve never had this many teams/attendees before. It was estimated there were 400+ people there. And it showed. But once everyone had been seated, it was time for an opening by none other than Nhi Do introducing VAFF’s very own executives and bringing on a night of short films. I might as well discuss those short films right now. Now there was a wide majority of both 1-minute films and 10-minute films so I’m going to summarize the 10 minute films and go in better depth. I will however say that the one minute film showcases are a fine combination of humour, action, and feelings, with a little bit of advertising. Amazing how people can compress so much into a single minute.

Eight Short Films about Cell Phones – When a man has to rush into work to fill in for another employee, leaving his family at the park, this emits into a phone-line of chaos, as different people call each other to try and sort out the problems they’ve gotten laced into. Started out funny, then got pretty dark towards the end. But pretty truthful, now maybe more people will understand why phoning and driving is illegal. I guess they still don’t.

Evoked – A foreign student gets invited into a study group where he becomes the victim of a chunky racist leading to worse things. As the film progresses, we get treated to passages explaining an ancient legend that haunts people. This was a very ominous film. Really disturbing. I think the guy next to me might’ve freaked out a little.

Moving Day – Okay, not to be full disclosure, but I knew most of the people who worked on this one. An elderly lady is moving out of her home and into a tiny one-room apartment. It captures the essence of housing in Vancouver and how not all Asians are super rich. Very accurate story.

CR: Complete Reality – A short film about a game. An interesting game, taking place in the future, featuring the story of someone who duels it out with masked swordsmen. Very elaborate action and interesting way of showing gaming in the future, although now I’m more fearful of… Oh, never mind…

One 15-minute intermission of talking to connections later, and everyone sat back down.

Soul 4 Soul – A lone man has to go out to get some drugs from his favourite dealer, though his landlady tries to warn him about the ever-present danger he is bound to run into during Ghost Month. He dismisses it as nothing and enjoys it when somebody drops by to visit, and then things get downright creepy. A good disturbing film though, for good shocking value.

Robin & James – A love story told by Robin as she reminisces about her long lost immigrant ex who was forced to move back to his country. Well maybe not forced to go back. He felt the need to return to his family. It’s a heartwarming story that progressively gets darker. Interestingly enough, I feel like I’ve heard a similar story to this before. Maybe someone I knew experienced this…

Followers: Wifi Interrupted – Okay, they actually decided to follow MAMM’s theme of superheroes and make a super elaborate short film about superheroes. The Followers are a team of heroes with each member representing a common social network. Together they stand to fight against the evil Hater, and his legions of people wearing black as he goes to disable Internet at every available provider in town. Now this was funny, and impressive. I can’t stand modern day superhero films (as you may have read up there) but this did really well.

Bunny Man – 4 Asian friends sit at a restaurant and talk about common terms people call them such as FOBs (Fresh Off the Boat) or CBCs (Canadian Born Chinese). But the conversation gets ruined by a giant bunny who sits at another table and just watches. So this initiates a battle of sorts. With that fluffy fiend, this made the film turn from basic to weird. The more we saw of Mr. Bun, the weirder the film got. But hey, it did make people laugh.

Now to get into the awards that were announced right after. Long-time friend Lawrence Le Lam announced the winners for the 1 minute films, J’adoube was all about a connection between people within just a little chess piece. The second place was Too Late, which was a rather sad tale about losing a connection with a loved one. Now to move on to the 10 minute films, it should come as no surprise that Bunny Man made it first place being the funniest thing I have ever seen despite being weirder than some guy I’m somehow often associated with. Coming in 2nd place was the ever ominous Evoked, which really was a personal favourite of mine. As for the fan award, that has to be announced instead via social media, but it’ll come up sometime soon I believe. And I can’t believe there were so many people voting that it made the website’s system break. Personally, I blame the Hater from Followers. If only we voted with the old fashioned paper ballots.

After all that, everyone went straight to Sushi Ville for the afterparty, and congested the place much like residents in Tokyo. There wasn’t much to do except connect some more and of course, eat sushi. A great starter and I can’t wait for VAFF in November. This was an exciting event that showcased fine quality short films with Asian power.