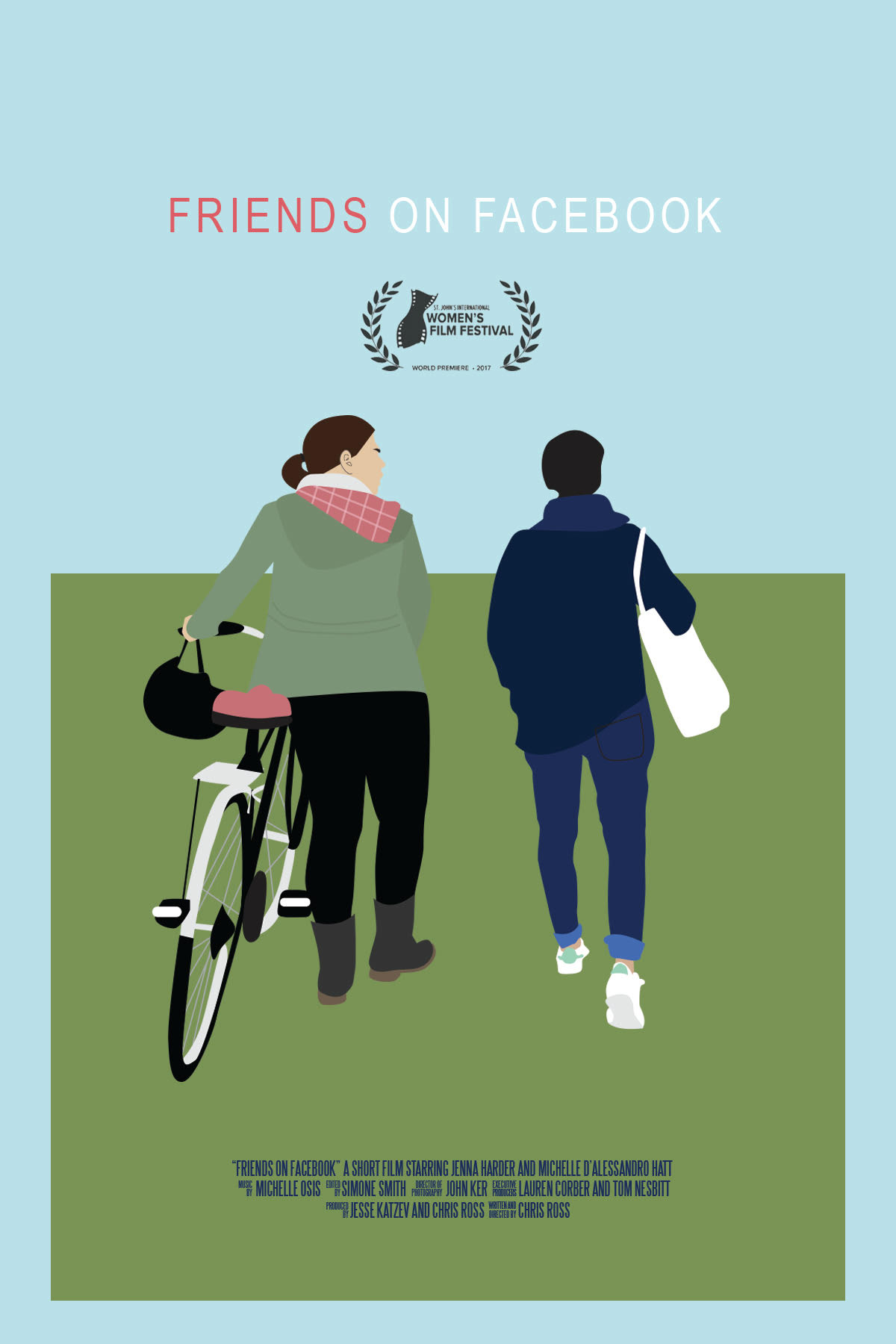 American essayist Anais Nin wrote in the 1931-1934 volume of her diary, “Each friend represents a world in us, a world possibly not born until they arrive, and it is only by this meeting that a new world is born.”

In writer/director Chris Ross’ poignant short film, Friends on Facebook, this notion of self-discovery through friendship is aptly illustrated by a chance meeting between two women at a local pool.

Jill and Pia first met several years ago at a mutual friend’s wedding and have kept tabs on one another ever since, like so many of us do, through social media. In this fleeting encounter, their initial uncomfortable chitchat eventually gives way to a deeper understanding of one another and themselves, highlighting what’s possible if we look up from our keyboards and smartphones and allow ourselves the vulnerability of real life human interaction.

In anticipation of their attendance at the world premiere of Friends on Facebook at the St. John’s International Women’s Film Festival, I recently interviewed Toronto-based Ross and co-stars Jenna Harder (Jill) and Michelle D’Alessandro Hatt (Pia) about their work on the film.

Chris Ross: I was inspired to make the film after running into an old acquaintance at my local pool. Although we’re not friends on Facebook, the uncertainty and vulnerability that came with that setting got me thinking about social interactions in general, especially in the social media age, and it sort of grew from there.

Tell us about the casting process.

Ross: We decided to have a very open, DIY casting process for the two leads, and posted calls for cast on Casting Workbook, as well as Facebook, and we auditioned everyone who submitted. We saw about thirty people over two different sessions, and then had a handful back for callbacks, where we paired people up to read together. We were blown away by the talent we saw during the casting process – Toronto really has a lot of terrific actors.

What attracted you to the character of Jill?

Jenna Harder: I was attracted to the character of Jill because I was actually going through something similar at the time I read the script.  I was questioning a lot of things, my life choices, who I was as an artist, where my life and career was going, did I even want to keep acting, was it worth it, etc, etc… Jill is probably the closest character to myself that I have ever played, which presented a unique challenge that was really exciting. The topic of female friendship and human connection is one that I find very interesting and think is something very worth talking about.

What drew you to the character of Pia?

Michelle D’Alessandro Hatt: I wasn’t drawn to Pia at all, actually. For the first round of auditions, Chris invited us to choose which character we would read for, so I prepared my version of Jill. I think a lot of artists can relate to the way Jill feels about her music, and it’s really easy for all of us to presume everyone else is having a much better life than we are. At that initial audition, Chris asked me to try Pia instead, and while I don’t feel as close to her in many respects, I absolutely get what it’s like to be misunderstood and, like Pia, I love supporting other artists whenever and however I can.

What part of making this film did you like the most and which part would you unfriend?

Ross: I have a new short that I can’t wait to shoot next year, and am super excited to be developing my first feature, called The Art of Being Busy.

Harder: I am currently working on the third draft of a short film about women in the film and television industry and building up the guts to tackle the second draft of my first feature script.  I shot an episode of a web series, Sis Boom Bah, created by and starring the super talented Delphine Roussel, which should be released soon.  I’m looking forward to going to St. John’s for the world premiere of Friends on Facebook and can’t wait for other people to see this beautiful little film.

D’Alessandro Hatt: I’m excited to be cast in two feature films shooting this fall/winter – Justin McConnell’s shape-shifting horror Lifechanger and the drama Love Bonds, written and directed by composer Robert Bruce. I also have a couple of scripts in development under my production company shingle Black Lab Film Co.

Ross: It’s pretty reserved. I’m a generous liker, but don’t post that often – when I do, it’s usually industry-related stuff or comedy, with the occasional social justice article or righteous petition thrown in. I let my hair down a little more on instagram (my favourite social media platform) either on my own page @darkpalepics or on the account we set up for this short @friendsonfacebookthefilm.

Harder: lol my Facebook personality is basically hiding people’s feeds and reposting feminist articles.  I use it to promote and network a little but mostly just to keep in touch with friends who live abroad, reading articles and news and looking at cute animal videos.

D’Alessandro Hatt: I’m a very shy facebooker. I’ll share the odd personal or professional photo, but I cannot resist posting about dogs that are lost or in need of a home. On at least one occasion I helped rescue an abandoned dog so a wonderful family could adopt her. If used for good, the Internet can be magic.

And, as both Anais Nin and this lovely film reveal, friendship can be magic, too.