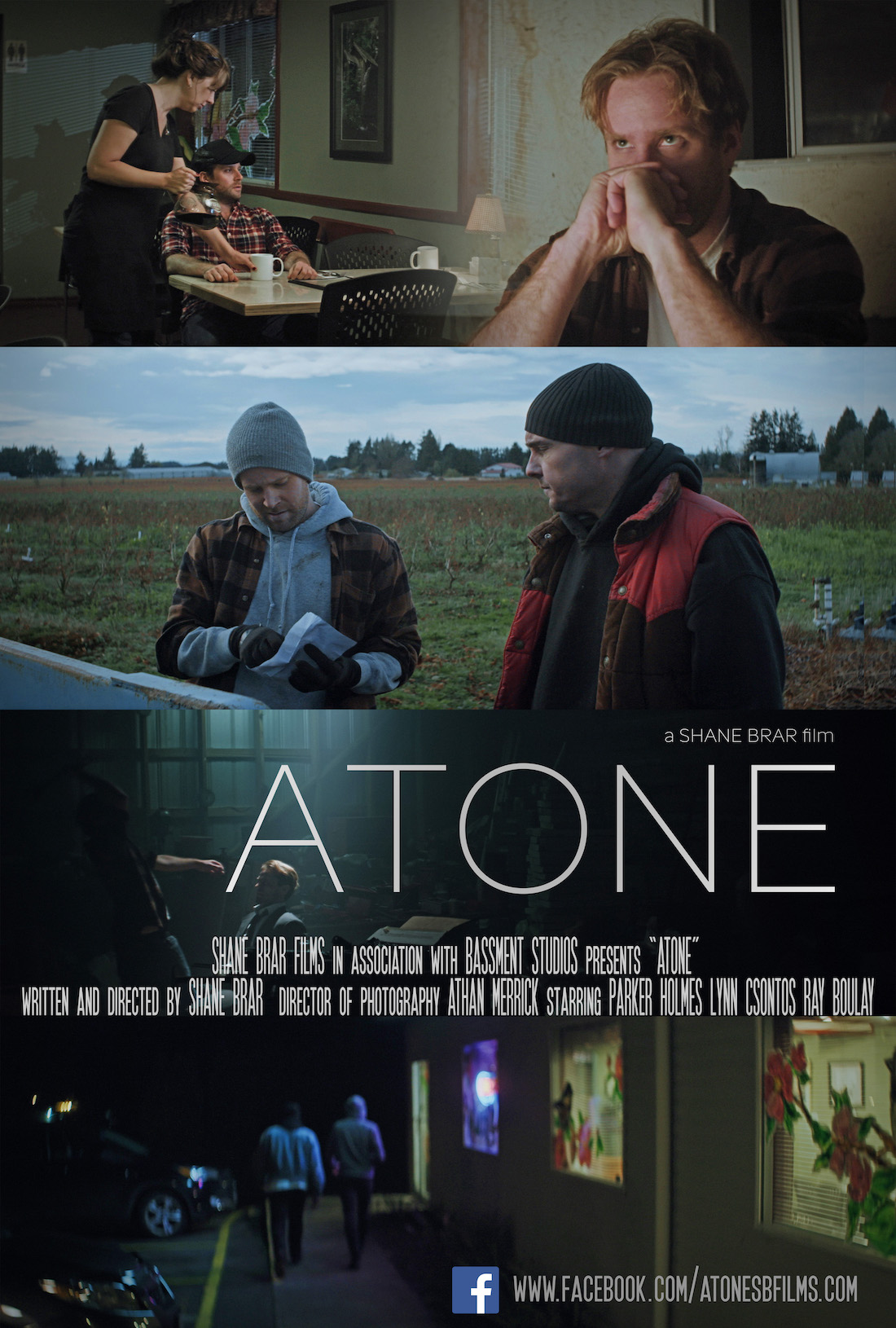 Many times we have watched the news only to discover that another small company has been forced to close their doors because they can’t compete with big business. Housing prices have made it impossible for anyone that isn’t a millionaire to buy. Farmers work harder and longer and still get gouged by the competition. How many times have we waited to see the tables turn or wish for the wealthy and greedy to suffer, just a little?

Atone is one such short film that revolves around a hard working man employed by a farmer that is about to lose everything.  Big corporation is pushing out the little man, but this time someone is willing to take a stand and fight back. Somebody that has lived a life filled with bad choices, mistakes and regret. Somebody that wants to redeem himself by standing up for what he believes is right. That somebody is Mike, the farm labourer.

Shane Brar is the writer, director, producer and also has a small cameo in the film. We met up at a coffee shop to discuss his latest project Atone and the inspiration that propelled the movie forward.

“This film demonstrates frustration and anger at it’s highest level. Was the inspiration for this film, to take a stand against big corporation?”

“Actually, the inspiration came from watching a Nicolas Cage film, Joe. In the film, Cage plays a character with a tarnished past that redeems himself by standing up for what is right. Although the film was not a huge hit and slightly low brow, I thought it was one of his best performances. I had seen the film with a fiend of mine that had a farm. We had discussed the movie and his farming frustrations. I went home and began to combine Nicolas Cage’s character with my friends farming situation to create the script.”

Shane Brar also went onto explain his interest in politics and corporate greed. His intent was to show two sides of the story. The selfishness of individuals and a reason for people willing to take a stand against the political system to correct it.

“What was the process of writing and producing this film?”

“Although it’s a short film, it took two years to make after the script was written. It all worked out however and I’m quite pleased about the timing of it. Pre-production took two months and I cast most of the six actors from an acting school I had previously attended. Most have been working in the industry for ten years and showed true commitment to the film. If they hadn’t believed in it, it wouldn’t have been as good as it is. They really came through for me. The seven man crew was small but talented. I went over my shot list with my cinematographer before each shot and we were always on the same page. I used three locations in and around Abbotsford and post took approx. four months.”

Shane filmed for two days in November and was so impressed with the actors’ ability to shake off the cold weather to perform at their best. He utilized the natural lighting when filming outdoors and credits his cinematographer Athan Merrick. Parker Holmes carries the movie as Mike. His performance is stellar and sometimes shocking as the role of a very angry man with atonement on his mind.

“Considering this is a short film slightly under eleven minutes, how did you go about financing it?”

“I crowd-funded through Indiegogo and didn’t raise our projected target but found a way to make the film and pay my crew anyways. I had a budget of 1250.00 to work with. I could’ve waited longer to raise more funds but I’m definitely pleased with the final product. I did have a tremendous amount of support and my old acting instructor even donated to the film. I’m the type of filmmaker that will make a movie regardless of whether I raise the projected budget or not. If the script has been written, I’ll find a way to make it with less money. If I waited for every last dollar, it probably wouldn’t get made. I love to make films and believe in the ten-year rule. If you’ve been working in the industry for ten years, you should have the door opened at this point. It’s then your choice to walk through or turn around.”

“I really enjoyed the music in the film. How and where did that come about?”

“I found that song on Public Domain. It’s an old John Lee Hooker tune from the 40’s. I sifted through music for three days before I came across it. I also found some great Robert Johnson music that fits well.”

Shane is a very motivated filmmaker with an intense passion for film. It comes through in our conversation and I found it very refreshing from a mundane attitude of some in the industry that still aren’t quite sure where they fit. Shane knows where he fits and he wears it like a glove. He also tells me that he’s written three of the five films he’s made. He still doesn’t consider himself a writer but is open to working with one that won’t demand money upfront. Unfortunately, he tells me that his experience with screenwriters seems to revolve around money more than collaboration. I’m hoping that changes soon because his motivation is inspiring and deserves to be recognized.
Shane is currently working on turning Atone into a feature film. The film, Atone is being submitted to festivals for viewing pleasure and the reviews have been very positive. He did mention that he is very inclined to produce another short film that has one location. Challenging himself is intriguing for Shane. A filmmaker that looks forward to challenges? Possibly a new breed of filmmaker emerges from Abbotsford to take the industry by storm? That is how I see this playing out, but I’m no expert. I wish him well.