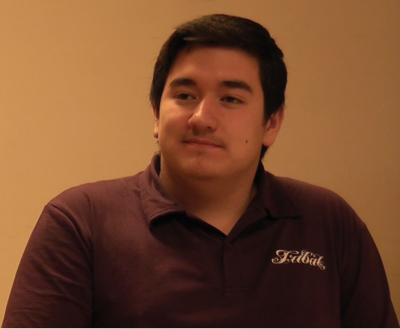 Annahis Basmadjian wrote this play in August of 2015. After a few revisions, a week of auditions followed, then casting, flyers, venues, bookings and food rounded out the preparation.

Upon arriving at UBC, she and Hovy Qiu found me an empty room with a couple chairs and one by one, they sent in the entire cast to speak to me about the play.

The first actor was Travis Friday (pictured). He plays the lead role of the Headless Horseman. He said he was drawn to the character because it reminded him of himself. Travis was recently accepted into the SchoolCreative’s acting program. We wish him well.

Next into the room came actor Kenneth Tynan. He is a working actor with two agents and just landed a role in a popular franchise he couldn’t mention. Well on his way I’d say.

Gabrielle Proulx is a business student with many musical theatre experiences.

Madison Goddyn was the next actress to enter. She plays Valcuray, an overzealous, quick to anger character.

Yuxi Zhang is a business student in her first musical.

Allistair Tan is also a business student, and has aspirations for being a voice actor.

Kately Nikiforuk plays Hilda. She’s been in many musicals and is a classical singer.

They all impressed upon me their passion for performing at their best for this play. Dedicated and a gifted bunch.

Opening night is Thursday March 10th (tonight) — the show is sold out.