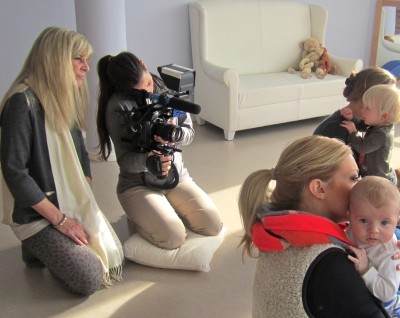 Noemi Weis is a well celebrated documentary filmmaker that tackles social issues in hopes of change. Her latest documentary Milk made its premiere in the early spring at Hot Docs.

She accepted our invitation for an interview via skype from Toronto. It was a discussion that quickly got to the heart of the matter, spoken from a voice that represents all the mothers in the world that have been slaves to the money profiting baby formula makers. They’re made to feel inadequate and pressured into choosing alternatives to feed their babies rather than nutritious breast milk, which have antibodies and other health benefits. Noemi wanted to understand if the problem was universal, so she travelled to 11 countries and 35 cities for answers.

“I started making this documentary four years ago. It took me two years to research, fund and gain access to doctors, nutritionists, government and mothers. It took nine months to film.”

In Canada, a new mother leaves the hospital with two weeks’ worth of baby formula. The suppliers spend 1 billion dollars a year on marketing.

Noemi presented the film to 200 students at a medical school. She received many thankful emails and learnt that nutrition is offered as an elective. She plans to present it at more medical schools.

Mothers that cannot breastfeed feel helpless. However, there is a method called re-lactation and  there are milk banks that are not being utilized enough.