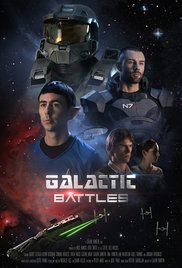 If you’re a fan of Star Wars, Star Trek, Halo and Mass Effect then you’re going to love Galactic Battles. It’s a fifteen minute film that find all four accidently meeting up in outer space. They team up to defeat a common enemy and along the way alliances are formed.

I’ve seen a short trailer of the unique artistic science fiction film, now half way through production. I did not expect to see a masterpiece in the making. With some admission, I know very little of working in the realm of CGI, Visual Effects, Green screen, Composite, Maya, Shotgun, Houdini or Blackmagic. Am I revealing too much? Thanks to meeting two people that do, I’m still no further an expert but do have a new appreciation and wonderment.

Calvin Romeyn (director) and Nikolai Romick (producer) are the two masterminds behind this impressive venture but they have had a team of brilliantly creative, dedicated and passionate volunteers in the Vancouver area applying copious amounts of effort until it is a finished and stunning piece worthy of a packed audience. They consider themselves very fortunate for the team. Some of the students in the Faculty of Fine Arts program at Capillano University are getting credit for working on the project.

“We could not have achieved this much and come this far without them! When we go into the studio to visit the progress, it is like Christmas Day every time.”

They’re also very fortunate to have a large network of very generous and enthusiastic people they’ve worked with over the years that volunteered much of their time. It was and still is an open movie concept invitation to anyone that wants to be involved and remembered for something great.

Meeting up with Calvin and Nikolai through the magic of skype gave me a unique perspective on ingenuity, community and how you will never know unless you try attitude, some of us should be exploring more.

The sci-fi film started out with four friends in a room hatching out a non-profit passion project with a popular premise. Once settling on the genre of science fiction, they began creating a long list of contenders. Then came the process of elimination. First there were ten. Then there were four franchises that worked well together.

With a budget of five thousand dollars masquerading as a much larger one, they began production in the summer of 2015. Nikolai knew a talented screenwriter, Rovin J. Onas that could turn their treatment into a script. Once that had happened they crowd-funded on Indiegogo. The gut of the money primarily went toward costumes and food.

Both Nikolai and Calvin come from the visual effects world. However, this is Nikolai’s first soirée with producing. He’s also lending his skills in the visual effects and texturing department. Calvin has made films, commercials and works as a composite supervisor at a studio in Vancouver. He’s directed many productions.

[pullquote]“Whenever I say to Nikolai, it would sure be nice if we just had one of those or one of these, he works his magic and makes it happen.”[/pullquote]

The amount of sponsorship on the project has been estimated at an astounding 100,000.00. VFS has allowed them to shoot in their green screen room. Gearhouse Rentals has sponsored them with equipment, CG Masters Academy supplied them with a 4K Blackmagic camera, AMD helped them out with 6000.00 worth of video cards and another sponsor contributed 100,000.00 in software licensing. Shotgun is an essential program being utilized as well as working with Render Rocket for efficiency.

As incredible as this story is, it gets better. The French composer Jose Pavli, living in London has volunteered to create a symphony for them using an orchestra in New York. He was a fan of some of the franchises and contacted them through their website.

There has been a super nova of excitement surrounding this film. The mayor of New Westminster has even offered to screen the film at the Anvil Center. They posted the news of the film on Reddit. It generated twenty pages of intense fantasy-constructed conversation.

“What is it like for the actors working in a green screen CGI environment?”

“It’s definitely been one of the biggest endeavors. Creating the scenes and the compositing, rendering and recreating the characters in a virtual environment then having them pretend to see something that isn’t there. It’s been an undertaking. The character Garrus Vakarian from Mass Effect has been the hardest character to create.”

This production is a passion project at the highest level. Once completed, they will be introducing it to as many viewers as realistically possible. You can see the trailer at https://www.youtube.com/watch?v=PItJHqRGxow.

http://www.galacticbattles.net/donate if you’d like to help them see the film come to fruition.
I wish them light-speed continued success and look forward to sitting amongst the audience once it is.