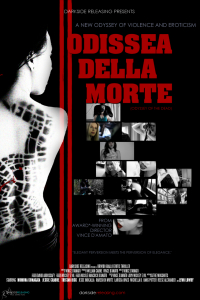 When you start making feature films it’s a good idea to have a distributor in place.  They can help you secure financing and assist with marketing. If the film is amazing you might also recoup your costs for the production.  When it comes to finding a distributor, you must do your homework to find the right fit. Look at films they’ve got listed in their library. They are taking on the risk and supporting your film by soliciting theatres, VOD, iTunes and DVD markets. It’s why they call it show business.

David Aboussafy knows the game very well. When he was younger he attempted to break into the business by writing a spec script for Star Trek – Next Generation. He tells me what he learned from that experience as well as his new recipe for success.

“When you wrote that spec script for Star Trek, what did you learn from it?”

“I learned when you write your first script, you need to actually finance it, find the talent and produce it yourself.”

“You’ve come a long ways since then and are still involved in film. At what capacity have you been involved?”

“Well, I am CEO of Generativity Productions, the Co director/co founder of the Vancouver Badass Film Fest and a partner with Darkside Releasing. With Darkside Releasing I work in the department of production and development. I will also work with the filmmaker to help secure financing.”

There are grants and financing available to make your film through various means. Telus, National Film Board, Telefilm are just a few that will consider you but most come with a hitch and some hurdles. Overcoming them will make you a better filmmaker and give you street cred.

“What would you say to other budding filmmakers breaking into the business?”

“I’d suggest if you have a great story, a couple locations, you can make a decent low budget film. When you begin to add VFX, more locations and a bigger name cast it gets more expensive.” “I know as a producer you must be staying very busy. What films have you recently finished that you’d like to plug?”

“A couple movies coming out this spring that I’d like to talk about are Valley of the Rats (Odissea della Morte) which I was a producer, actor, location manager and distributor for. It stars Tristan Risk, Raresh DiMofte and Momona Komagata. We filmed some of the scenes in Turin and Milan. It came out on VOD March 27 and is also available through Darkside Releasing. Another feature film is Amazon Hot Box starring Tristan Risk, Ellie Church and Jett Bryant. It was shot in Georgia. I was executive producer, actor and am working on the distribution side. The third film I’d like to mention is Ayla. It also stars Tristan Risk, Nicholas Wilder, Dee Wallace. I co –produced and acted in it. It just went on sale April 3rd.” Incidentally, Darkside Releasing started up this year and Amazon Hot Box is it’s first feature. It has a catalogue of approx. 30 films for your perusal. They tend to focus on film genres such as erotica, horror, thriller, action, crime, drama and film noir.  If you like blood and guts with half naked women running from zombies, vampires and monsters, chances are you are the audience they’re looking for. I have been to the website which contains many trailers you can watch before you buy. I found many appealing, even as a comedy buff. Since Ayla’s release, it’s already had over 1 million views.  The proof is in the blood splatter.

“Have you written any of the films that Darkside Releasing is promoting?”

“I have co-written a feature, Sherlock Holmes VS Frankenstein that our company is behind and we hope to begin shooting in 2019. I’d like to film it in France and Germany. We’ve rewritten the script as many as twenty times. We are always looking for new scripts with low budgets to micro budgets that we can help move into production and development. I’m hoping to work with Marteau Films, the same team that made House of VHS.” Another film coming out soon is the Song of Solomon, which he helped produce. He also has a script in development is Vampyros Sexuales. David co-wrote it with Vince D’Amato. They are hoping to shoot it in Italy.

In addition to having many projects in motion, David Aboussafy along with Darkside Releasing will be attending the Celluloid Social Club at the Anza Club on April 18, Canada Film Day to provide some trailers and discuss their brand new distribution company, Darkside Releasing.  They are hoping to foster local filmmakers with financing, producing and distribution of their work. Darkside Releasing also helps to make concept films to help promote the financing of a feature.

The Vancouver Badass Film Festival is also extending their reach next year to include scripts for development as well as micro budgets. It is a festival that keeps getting better with age.