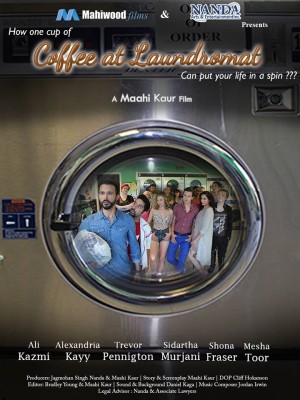 Maahi Kaur went to wash some laundry and returned with a story. That story developed into the short film, Coffee At Laundromat. An East Indian man living in Canada on a student visa must leave in two months because he cannot get an extension. Immigration is suspicious of him working illegally. This is the premise of the film, but it also tackles LGBT and other social issues.

Maahi not only wrote it but also directed and co-produced it. She credits her fantastic crew for their dedication and professionalism, including Jagmohan Nanda (co-producer), Cliff Hokanson(cinematographer). VFS was helpful in providing rehearsal space for the actors. One of the lead actors was flown in from Toronto, while the rest were from a local agency.

Maahi told me she plans to focus on directing her next film and forego the producing. With a cast of seventeen, locking a shooting date became detrimental. All but one actress was able to commit. When she  had to cancel, Maahi changed wardrobe and stood in.

Maahi managed to stay within budget due to a background in finance.

A very inspirational filmmaker looking to establish a full time career doing what she loves. Writing and directing are her biggest passions. Garnering attention from her first film has helped to elevate Maahi’s name as a writer and her production company, Mahiwood Films, as a creative entity.

I for one will be looking forward to future productions with more positive messages from Maahi Kaur.