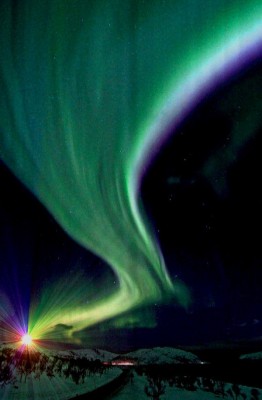 If you’ve ever experienced the Northern Lights/Aurora Borealis and it had a profound impact on you, wouldn’t you want to share that with your child? Now factor in that you’re a single parent with gambling debts and your daughter has weeks left before she loses her eyesight entirely.

Desperate situations call for desperate measures. This is the premise of the feature film Borealis. Shot entirely on location in Manitoba, it tells the story of a single father struggling to build a relationship with his pot smoking, rebellious teenage daughter, also named Aurora. She has an unfortunate condition that is robbing her of her eyesight. With only weeks left before blindness, they drive to Churchill, Manitoba to see the Northern Lights.

The father, played by actor Jonas Chernick, and his on screen daughter, played by actress Joey King, have incredible chemistry while on the run from a loan shark named Tubby (Kevin Pollack) and his enforcer Brick (Clé Bennett).

A road trip movie with a kibosh waiting around every corner. Managing to stay just miles ahead of Tubby and Brick, father and daughter finally arrive at their destination.

The night is clear and visible. The Aurora Borealis puts on a magnificent display. A father feels elated that his daughter is experiencing it for the first time. They made it.

The illuminated champagne of nighttime’s natural wonders dances for them. Surely Aurora is able to appreciate it in her last moments of sight. What is her reaction?