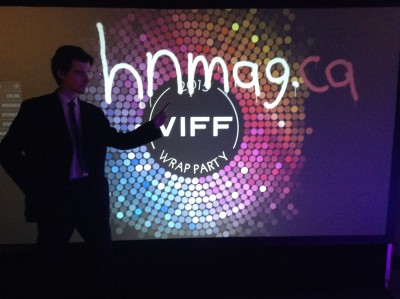 What better way to close out at VIFF than partying at what used to be a train station located somewhere in East Vancouver? I actually got in earlier than most people, witnessing the volunteers going over their plans, so that meant I had to get my ticket scanned in the middle of the area instead of at the entrance.

Surely enough, it wasn’t long before the majority of people came in and started mingling. I got complimented a couple times, and they even provided free food and liquor. Okay, maybe the liquor had at least cost a drink ticket, and money as well, but at least the cheese, pulled pork, and chunks of bread were free.

However, there weren’t enough seating areas. One corner was an exclusive spot. And the seaing areas were pretty much small corners supplied with old fashioned furniture from Art centres. Speaking of art, a couple animations were playing on top of a giant screen. My personal favourite had to be about a polar bear who travels from the Arctic to the city and poses as a human to learn how to fight global warming. Since almost everyone was unbearably loud (The DJ and the live band included) I found a quieter spot in one corner with light-up clouds and a smart board where you could illustrate something for fun. Add a virtual reality game and the closing gala is enjoyable, though after watching somebody, I wouldn’t advise playing virtual reality under the influence.

It’s too bad VIFF had to end so soon, but there will be the next one, next year. Can’t wait.