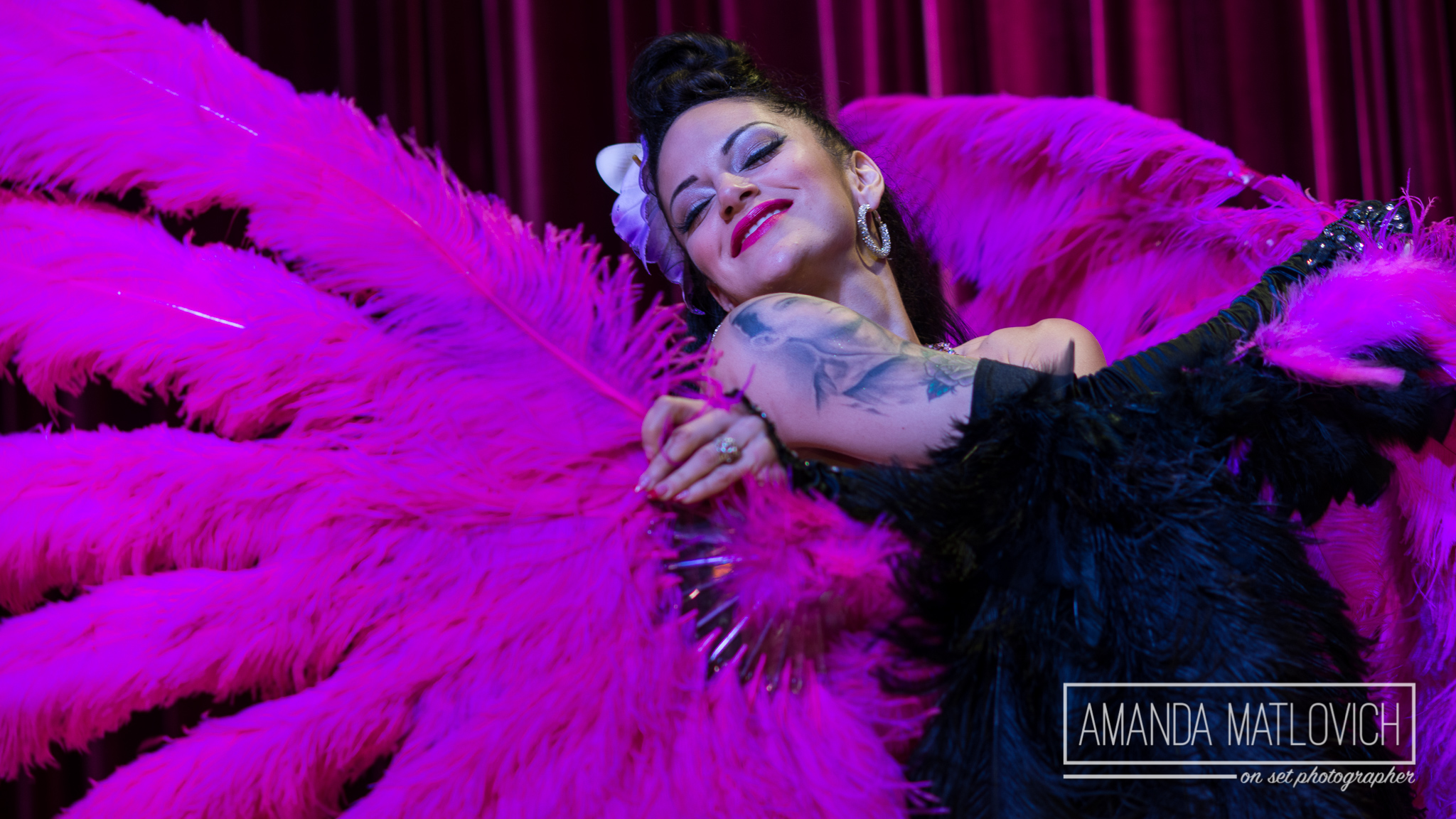 There are many ways to tell a story. Before there was language there was cave drawings. With the advent of language, society evolved and order followed. Evolution became focused on growing food, building homes, forming government and creating laws. Civilization became all business and no pleasure. We had no idea what we were missing, because it hadn’t been discovered yet. Thanks to a man by the name of William Shakespeare, he realized our lives could be much more full. He introduced us to storytelling and entertainment. We’ve been hooked ever since.

These days, entertainment is as necessary in our lives as soap. It makes life much more enjoyable and it draws people in. One such form of entertainment that has evolved throughout the centuries is dance. We use dance for fun, for expression, for competition and for storytelling. One such example of storytelling is performed through the art of Burlesque.

Jackie English wrote and directed the feature film, Becoming Burlesque. It is a subject that is very close and personal to her. She has performed Burlesque with a company called Love Letters. Being able to bring dance to the big screen is what’s most appealing to Jackie. So much so, that she has taken the leap from making over a dozen short films to her directing debut on her first feature.

I was lucky enough to catch up to her in Toronto through the magic of the telephone. She was very helpful in explaining the clear difference between a typical strip joint and a Burlesque performance.

“I’m not very familiar with the difference between exotic dance and burlesque. Perhaps you can explain it to me.”

“ In a strip club the audience imposes their fantasies on the dancer. In Burlesque, the performer imposes her fantasies on the audience.  A Burlesque performance can be anything: ray, naughty, political, funny, disturbing, ugly or beautiful.  The performer is telling a story through the art of the tease.  In neo-burlesque, performers combine this with other skills like different styles of dance or song. Performers may sing opera, some may juggle objects as they remove their clothing, or do magic. At the Burlesque Hall of Fame Weekend I saw one of the Legends make doves appear and disappear. It was even more impressive done almost naked. I mean – where did the doves go? Burlesque is more closely related to performance art than it is to stripping.”

“What is the premise of your film Becoming Burlesque?”

“The story follows a Toronto born, mixed race Muslim girl, Fatima, who doesn’t quite fit in anywhere until she falls in love with Burlesque. She then has to reconcile the different sides of her. Her brother also follows her into that world to try and ‘protect’ her. A lazy, lost Toronto guy who is not sure how to be a ‘real’ man. He finds himself in over his head when he falls for the star dancer. When he spills the beans accidentally to the parents, Fatima has to choose between her old self and her new identity.

“Why did you intentionally choose a secular Muslim woman to carry this story?”

“I noticed that both in the culture of Burlesque, and modern young Muslim women, there are a lot of misunderstandings and assumptions of exploitation for what is essentially a woman’s decision: what she wears. It’s almost like society has decided a woman is only credible when wearing an optimal amount of clothing, neither too much or too little. I wanted to challenge that.”

Considering Jackie is also a performer, she is very versed in the still mostly underground art of burlesque.  She has also done her due diligence making two trips to the Burlesque Hall of Fame Weekend, which happens once a year in Las Vegas.  It attracts performers from as far away as Whitehorse, LA, Seattle and Australia.  The Festival also pays homage to the Legends of Burlesque, giving them stage time and respect. These are women who paved the way for all women’s freedoms. The women are 60, 70 and even 80 yrs. young, and yet when they take the stage, they are breathtaking in their composure, confidence and poise. That is the power of Burlesque.

Burlesque is about captivating your audience through your talent and art and not about how fast the performer takes THEIR clothes off. Jackie tells me about a group who dressed up as windsocks for a performance, and another who teased from a Godzilla mascot outfit. There are no limits in Burlesque.

“How long did it take you to shoot your film and what locations did you use?”

“With a crew of around twenty, we shot for fifteen days in various locations around Toronto. I was lucky to shoot at the famous Lula Lounge, as well as the Red Sandcastle Theatre and other various locations. In total, we used approx. seven locations in all.”

“Because the film is heavily dance based, where did you find your actors?”

“I cast the dancers from Love Letters Cabaret. These are authentic Burlesque performers who have been working with the choreographer for years. My lead actress, Shiva Negar (American Assassin, Murdoch Mysteries, Hemlock Grove) was discovered by my producer Ryan Goldhar. The actor playing Fatima’s brother is Khalid Klein (Heroes Reborn, Killjoys) was discovered by an agent friend, Severn Thompson (Helix, Rookie Blue) and Hrant Alianak (Robocop, Riftworld Chronicles) have been family friends since I was a kid and when my mom ran the Factory Theatre in Toronto. I used to do corporate dance shows with Courtney Deelen (Suits, Murdoch Mysteries) and stumbles upon Katelyn McCullogh (Reign) while casting another project. Sam Kalilieh (American Gothic, 12 Monkeys) was recommended through many industry colleagues. Our choreographer is the award winning Burlesque entertainer Pastel Supernova who also plays the choreographer in the film. The entire dance numbers were work-shopped by Love Letters Cabaret at the Toronto Fringe Festival.”

The DOP was Clement Lush (Duty Calls, The Cart) and editing will be done by the Butler Brothers, Jason and Brett. Jackie considers herself very fortunate for receiving some financing through Telefilm Canada, as well William F. Whites International was very generous with providing the camera, lighting and grip equipment at indie friendly rates.

“They’ve been very supportive.  They even threw in some swag, such as sweatshirts and hats for the crew.”

Years ago Jackie was a club owner of the establishment, Bread and Circus, where she booked live entertainment for years. Luckily for Jackie, she still had those contacts with many musicians and they contributed some of their music to the killer, all Canadian soundtrack.  The music is award-winning, current, with elements of world music and vintage cabaret in it, and included Vancouver based band Delhi 2 Dublin.

She is hoping to have the film finished by May, in time for festival submission.  Once it has its theatrical release, she plans to have a short live burlesque performance for the opening of the film.

Before directing her debut feature, Becoming Burlesque, Jackie English has had success directing short films such as Bravofact!, Duty Calls, which won Best Actress at the Canadian Film Festival and the short film, NIMBY that won 1st place at TUFF in 2011.

One thought on “Exclusive – Becoming Burlesque”