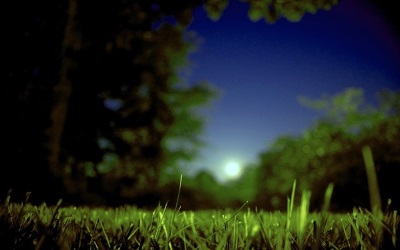 Barry Jenkins, Moonlight‘s writer-director, forces. He forces you to reckon with a lot of different images in the film. He creates a torrent of emotion without any audible dialogue. I can’t think of a better use of silence in a recent film. There’s nothing else to do but watch the characters’ eyes, and in this case it’s true that a picture’s worth a thousand words. Maybe that’s why Little (Alex R. Hibbert), the main character, speaks so rarely.

Little lives in an area filled with and fuelled by drugs. It’s primarily black. It’s a part of Miami. Not a glamorous part. Jenkins opens with a chase. Three boys with a taste for violence hunt a smaller boy — Little — through this waste of a neighbourhood until he’s forced to hide in a second floor crack den that is thankfully empty. The hunters throw their shoes at Little as he cautiously explores the den, its empty cupboards, bare floors, and broken windowsills. Soon after, a banging erupts, the boarded up door splinters, and a man’s hand appears. This hand belongs Juan (Mahershala Ali). We don’t know who he is, but it’s clear he’s harmless. Little figures this out, and accepts an invite to a nearby fast food joint, where Juan tries to get him to open up. He fails, but the two form a bond. When Juan brings Little back to his place, our worries are further lessened when we meet Juan’s girlfriend Teresa, who’s gentle and motherly in a way Little clearly needs. Later, after another plate full of food and guarded conversation, Juan takes Little back to his home, where Little’s mother, Paula (an unrecognizable Naomie Harris — “this actress was a Bond girl?”), berates him for coming late, and all but attacks Juan.

Little pinballs between these adults as he attempts to navigate the age of 12, which appears particularly difficult until we jump ahead to high school. Just like in life, some people who played a minor part in your younger years emerge as major players when you’re older. For Little (now played by Ashton Sanders), that person is Kevin, who took pity on him in middle school and now, seemingly out of nowhere, causes Little’s life to change.

Yes, this is a movie about boyhood, and manhood, and what’s expected as one journeys through both sections of life, but it’s also more general, about friendships and relationships (both platonic and romantic) that shape your life. Why do you remember every detail of something someone said at lunch about the apple your mother packed you for school, but not every detail of your first date?  In this case, Jenkins makes sure both the mundane and the larger than life feel equal. It’s clear his life is on display — not just because he’s admitted that, but because there’s an honesty to the scenes and dialogue in Moonlight that I hope can’t yet be faked.

This is a heavy movie, but it isn’t draining, and I think that’s because Jenkins’ agenda, if he’s got one, isn’t on display. There are no logical moves taking you to a logical conclusion — no more than there seems to be in life, anyway. He makes sure Moonlight‘s structure borrows from life, and counts on the strength of the performances to hold your interest, and they do. When Paula sees Juan in the street, without Little, and sneers at him, “You want to tell him why the other kids pick on him? Why he’s different?” she hints at a whole other world the film explores — if in the ’80s you’re black, poor, and gay, your life is hard.

I want to draw attention to the score. It is effective. Piano chords roll ominously with the weight of fog, and wind instruments’ high notes slice through the low tones with a lightness that provides not levity but unease.

Again, Jenkins throws us into a final third, when Little, now “Chiron” (played by Trevante Rhodes) which is his actual first name, is in his mid-twenties. Things have changed. He’s not little. He’s buff. He looks more like 50 Cent than 50 Cent, but the same shyness is there. Speak to him longer than two minutes and the same look you see in Little when Juan first approaches is the look you’ll get here.

So, credit goes to the three leads, who share the burden of having to link each of their performances convincingly. The final third is the hardest bridge to gap, but it works, and it works well, especially when now living elsewhere, Chiron feels compelled to return to his hometown in Miami.

Let’s see what the Oscars have to say.