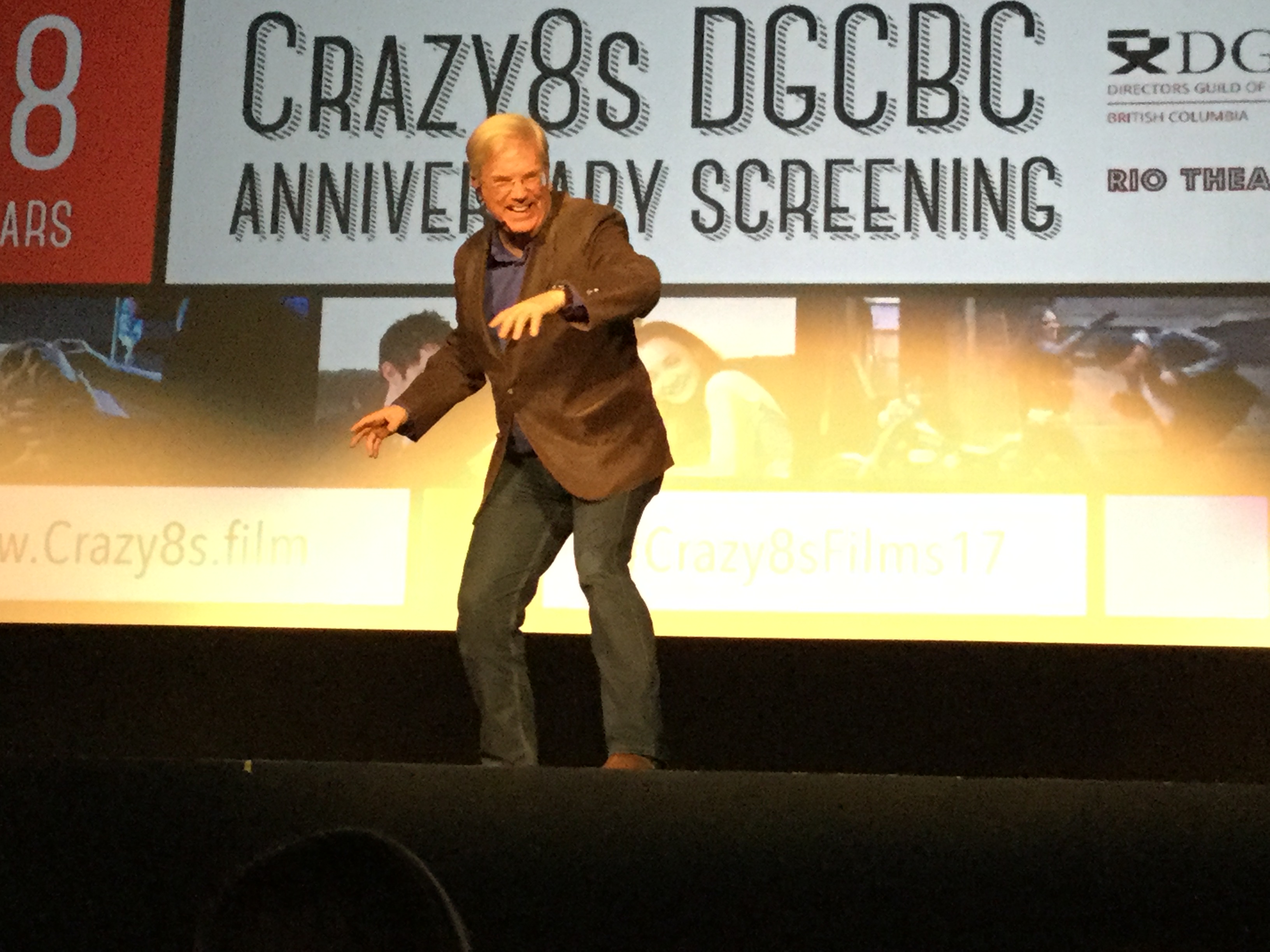 Last night, Crazy 8s celebrated its crazy great anniversary during crazy late hours with a fundraiser. Crazy 8s has been going on for crazy 18 years now and that night was a night of showcasing 8 crazy Crazy 8s films. Of course there was a crazy late start, but it was worth the crazy wait. While the lobby was filled with raffle announcements several snack line-ups and your basic mingle session, it went to show the event had lots of people involved. Hosted by the ever enthusiastic David C Jones (photographed above) this Crazy 8s was proven to be crazy and fun with trivia, short films, and of course, group photos and quick sessions with the many directors both for this year and the years before. Last night’s showcase is listed below:

50 Questions : A business man named Bob is required to take a certain survey. His survey consists of 50 questions answered by a temp who has a crush on him. More interesting, this temp used to work at his company. He’s pretty hesitant about this whole scenario. Geez, I feel like I’ve gotten into a situation like this earlier. But hey, love is funny that way.

My Father’s an Actor : Dad and Daughter live together situation. When that happens, the dad is usually something that cramps the girl’s style when she’s a teenager. And in this case, Leanne’s father thinks her WWII presentation is something she should do as an elaborate movie with dramatic pauses in between. Great film that shows bonding in a heartwarming and humorous way.

After the Beep : This one was made back in the day when answering machines were still being used commonly. Ian Baker’s family is captured by terrorists and strapped to a bomb. While he listens to the outcome of the messages on his phone (which seem to get more dreadful) his cranky friend Frank demands the tv get turned on so he can watch football. Semi-unrealistic but still qualifies as funny and even kind of dramatically exciting.

Crazy Late : Wow, somebody found something that rhymed with Crazy 8s and made it into a short movie. Jimmy Smith is late for his wedding and has to collect everything to get there in time. Will he make it or not? The whole movie is done in one shot. Because hey, we all like done in one shot movies, right?

The Vessel : Taking place in an interesting world, Dr. Eli Griersen uses a weapon he has discovered to take down obstacles that are in the way of a personal mission he has involving him and his terminally ill brother. Stunning visuals, great props, and even a thrilling story. Very Sci-fi and futuristic.

Cat vs Man : When Rory moves in to his girlfriend Susie’s home, his first enemy is none other than a bratty cat named Waffles who gets into fights with him and makes him visualize the cat is a man in a giant cat suit. Weird, but funny none the less.

A Red Girl’s Reasoning : Delia, a girl assassin on a mission to catch certain troublemakers and kill them with no remorse and supposedly leave no evidence. Dramatic, intense, and visuals in a stunning viewpoint. Not to mention the grayscale of the movie to add to the dark feel.

A Family of Ghosts : Young Abigail has ghost grandparents watching over her all her life. But they seem to take too much control over her, especially when it comes to who she falls in love with. An old fashioned movie that takes place years ago, which is both heartwarming and even a bit funny too.

As always, a great time is had by everyone who attends these events and I hope Crazy 8s is doing great for this year too. Because despite the crazy schedules and crazy incidents that happen throughout the shoot, Crazy 8s is still, well… Crazy. In a good fun way.