It’s interesting how COVID causes us to come up with new ways of being creative. Nothing says creativity than a talk show by David Oulton. Just last year, he started his very own show Face to Face with David, where he talks to actors from inside a special isolated location, the Fairmont Hotel. He’s an actor himself, but this time he decided to broaden his horizons, by creating his own show, starring in it, and making it about him and any guest he features. While technically not Face to Face and more device to device, David makes a more personal connection with his guests in an interesting format not often used by talk shows. So, without further ado, I got down to asking David some questions about his show where he asks questions.

HNMAG: I understand you also do work as an actor, so why did you decide to try something different like hosting a talk show?

David: It came out of boredom, honestly. It was kind of around less than a year ago in April. I just started losing my mind from COVID, I had a real estate business that had come to a grinding halt. There were no auditions, no one was filming, and everything was shut down. But when I saw people on Instagram doing those LIVE shows, where it was famous people talking to other famous people, I thought “Oh, that looks interesting. I could do that! I spend all day on FaceTime anyway.” and that was kind of how it was birthed.

HNMAG: And how do you decide who gets to be on your show?

David: For the first 6 episodes, I reached out to everyone I know in the industry, or that had an interesting story. I think we ended up contacting close to 300 people, and 15 agreed. Carson Kressley and Perez Hilton said “Yes.” which gave us a little bit of credibility and they took a chance on us because it was an unknown show at that time. Now it’s a combination of 2 things: You really have to be interesting because it’s a talk show, and you have to be interested in coming on and sharing. There’s also a celebrity factor, the bigger the name, the bigger the draw of the audience. But also people that I find interesting, I don’t get super starstruck ever by anyone. However the ones I get really giddy and excited to talk to are the people I want to have on the show for a personal reason or I grew up watching them on a smaller show from 10-15 years ago. Now that we have a network and the show is growing, we’re kind of fortunate that it’s 50/50 of  us reaching out and people asking US to be on the show. It’s artists, individuals, or publicists or managers offering their roster of people.

HNMAG: When it comes to your guests, how do you decide what to discuss with them?

David: The conversations all follow a very similar format. I want to know about their career as a whole, their highs, more interestingly their lows, I find a lot of times in interviews on talk shows, they discuss what is their best experience, and I want to know what is their worst. Also, what advice do they have, we focus more broad and more timeless instead of current events. I think it gives the show a little more longevity, and the viewers tend to agree it’s nicer to step out of current events and focus more on why someone had started or their worst experience. One time in particular, we had Vanessa Williams as a guest, and she had a book coming out, and I had to ask what her book was about and her upcoming performances. She had requirements for things we had to discuss. It tends to be a balance of what the guest wants to get out of the interview, and what I am curious about. There are also researchers, we have a talent producer on the show, Rae Farrer and she does a lot of research into the guests and finds interesting but not so obvious points to question them about. Every single interview, I have a guide that will explain where this interview is going to go and what we cover. 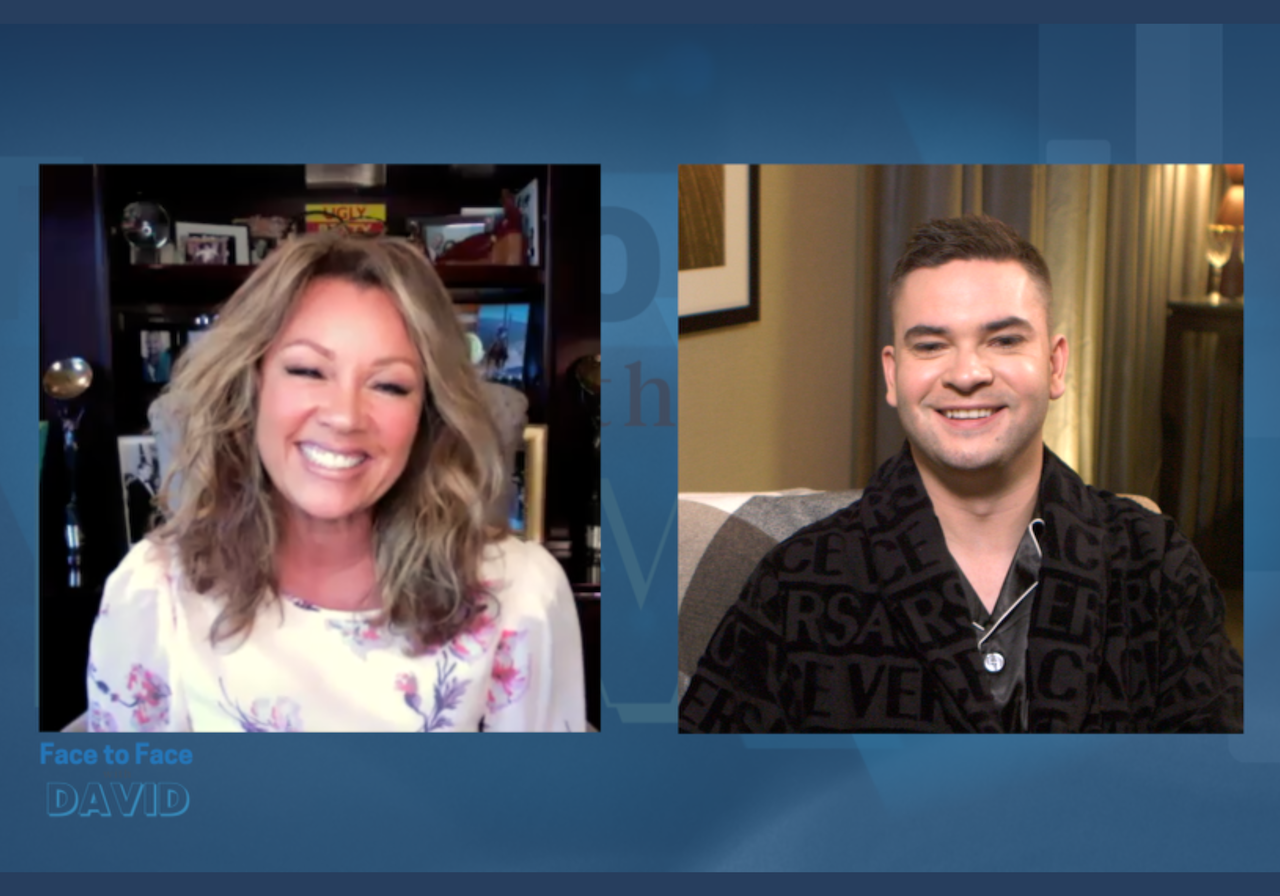 HNMAG: And have you learned a lot of interesting new details like acting tips?

David: Yeah! What’s been the most interesting to me is not the acting itself, but the directors and producers that come on. As an actor, the most nerve-wracking place one finds himself in is at an audition or doing a self-tape. What I found the most fascinating and so many other actors will find out is what it’s like for people on the other side of the camera. What the casting process is like, where people slip up, and what immediately disqualifies people. One specific instance is Emily Andras of the show Wynona Earp. With Emily it was really interesting because she gave some insights into that audition process, but I find that the most interesting, so I’m learning a lot of elements about it.

HNMAG: Are there any particular subjects you try to avoid talking about?

David: COVID. It comes up obviously. We’ve had 50 guests so far, and we have NEVER sat and discussed COVID as a topic. That’s very intentional.

HNMAG: The majority of the series takes place in a hotel. Would you consider moving to a soundstage or studio once the whole pandemic is over?

David: Because it’s such a small setup, and interviews are done remotely via Zoom, Skype, or whatever, the Fairmont provides the perfect backdrop. You have different rooms, different suites, you can switch it up. A soundstage for this show and this format, I don’t know. We had a LONG meeting about it. I think part of the appeal is that it’s cozy, it’s intimate. The guests are in their home or their workplace for the most part, and whether you’re in my living room or a hotel room, it feels more personal than on a big soundstage with lights, and all that kind of stuff. I’m hesitant because I feel we have a format that works.

HNMAG: As far as equipment goes for the show, what is used?

David: If I had to put a dollar value on the equipment, I would say it’s at least $250,000 worth. As a guest, all someone can see is me sitting here having this conversation but around the laptop I’m talking on there is a GIANT cinema camera, this huge 6-1/2 ft. circumference light that is angled overtop, another couple of smaller spotlights, there’s under lighting, a boom mic right above my head out of frame, and monitors everywhere so people can watch and take notes. We turn a room in the Fairmont into a full working studio. Equipment is minimal compared to a lot of other shows.

HNMAG: And with COVID protocols in place, you try to keep a minimal crew?

David: Yes. The nice thing is there’s about 15 people involved with the show. On set when filming the interviews there are just 4 of us, and the nice thing is at the start of this we are cohorts. Candace Schmidt and Jose Luis Gonzalez are married, Rae and I are cohorts with each other, that was intentional in order to make this work. At the same time, we have COVID tests and there are sanitizers. That room becomes a bubble for the purposes of filming because it is big enough that we can stay 6 feet apart and everyone is distant. But once you’re in that bubble, you stay there until we stop filming.

HNMAG: Since you run the whole show, do you do most of the work yourself in production and post-production or do other people do the work for you?

David: I definitely don’t do most of the work in post-production, it is definitely Luis and Candace. It wouldn’t be possible without them, Luis is our cinematographer but he’s also the editor. They physically do all of the work, but I am involved in every step of the process. When I’m done speaking with a guest, I do something that’s called a paper edit, I go to the studio, and meet Luis and Candace there. Then we’re going to look at these episodes there, and at the notes I made. Luis is going to glue them together. He puts in the effects and does all the techie stuff. I don’t understand it, but I do like to sit in and at least watch. The team does a lot of effort, but it is my name and face so I like to be involved in every aspect. Just in case something goes wrong and there’s an issue, there’s nobody to blame but myself.

HNMAG: Are there any other shows you’re thinking of making?

HNMAG: How about films? Looking to make more of those?

David: I’d love to. Put me in front of a camera, and I”m happy. Oddly in the last couple of weeks, I’ve done a lot of self-tapes, done some auditions, had some callbacks. Though as of right now, nothing set in stone.

HNMAG: Do you feel you’ll do lots of these episodes even after the pandemic is all over?

David: Yeah, and that’s kind of the appeal of LTV. One of the conversations we had was kind of a mutual understanding of taking this as far and as big and as wide as possible. I’m hoping that it has longevity to it.

HNMAG: Do you have any idea on what you may do for the 100th guest?

David: We’ve filmed 25 episodes so far. For the 100th episode, I think it would be really fun to do that in person and that would be really cool to make it a really big deal somehow. Maybe even bring back a bunch of the previous guests and do a big in-person discussion. Who knows?