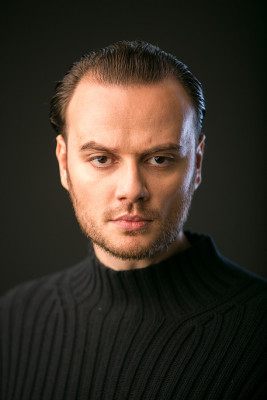 I try to attend most Booze ‘N Shmooze events sponsored at the last Monday of each month by Raindance Vancouver. It is a supreme opportunity to network with fellow filmmakers. One familiar and friendly face I always look forward to seeing is actor Raresh DiMofte.

Raresh can usually be found shaking hands, patting shoulders or engaged in movie conversation. From the first time I had the pleasure of meeting this man, he impressed me while refreshing my intrigue for well-told stories and the art of acting. He loves what he does and is a consummate professional. I asked him if he had some time to talk to me about his career. He gladly accepted.

When did you first realize you wanted to be an actor and what was your first introduction to it?

The passion found me while I was in a profound need of some form of expression. Nothing was planned but something needed to collide. It started in my later high-school years. It happened gradually rather than suddenly. I’ve always loved film and theatre. It was my escape, skipping school while sneaking into the movie theatre, watching films as I hid in the dark, forgetting all about the real world.

Raresh DiMofte just wrapped on a new Amazon TV series entitled The Man In The High Castle. The story is about what could’ve happened if the Nazis had won the war, told 10 years later. A fascinating reveal.