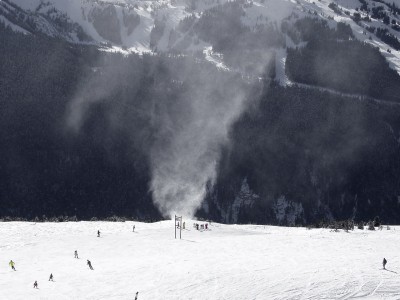 (Via WireService.ca) As mentioned earlier, Whistler Film Festival is getting hotter in degrees celsius, despite being referred to as the coolest film fest in Canada. Aside from Canadian features such as Carol, festival attendees will enjoy the experience of 89 films from 19 countries, out of 1200 submissions. There is also record showcasing of 46 features, 43 short films, being shown over the course of five days on eight screens in six different locations around Whistler. Some of the premieres are:

Carol – A touching love story about a married woman and a young clerk at a store set in the 1950s. Many positive reviews regarding this one. Showing at the opening Gala.

Le Mirage – Doses of comedy while showing the sad reality of a crisis when a proud father turns 30 and starts feeling miserable. When his grief gets the best of him and he goes too far, everything goes downward. So far, this is Canada’s highest grossing film. Cha-Ching!

Trumbo – Telling the story of screenwriter Dalton Trumbo, who started out successful in Hollywood,  only to lose his job when they started conducting witch hunts for Communists. From then on, he had to write scripts under a top secret identity. This film and Carol could be potential Oscar nominees.

The Hotel Dieu – A teenager goes blind after getting involved in an accident on the road. As he slowly recovers, he finds himself connecting closely with the people he can’t see, even falling in love with another patient. Sounds heartwarming.

Numb – Being played at the closing gala, this film shows how a simple expedition in the mountains turns into a frightening survival story. Isn’t easy to find gold in the cold.

My American Cousin – A 12-year-old country girl is tired of her mundane life. Things change around when her cousin Buck comes by and she starts to feel romantic feelings for him. But he’s an adult. Despite the title, this was filmed in BC by Sandy Wilson.

The full lineup and film schedule can be viewed here.

Aside from the multiple premieres, this event will also include galas and special presentations. The films have been categorized in 11 individual sections, and 65 of these films are currently being judged within 6 competitions with 14 prizes including many rewards in cash.