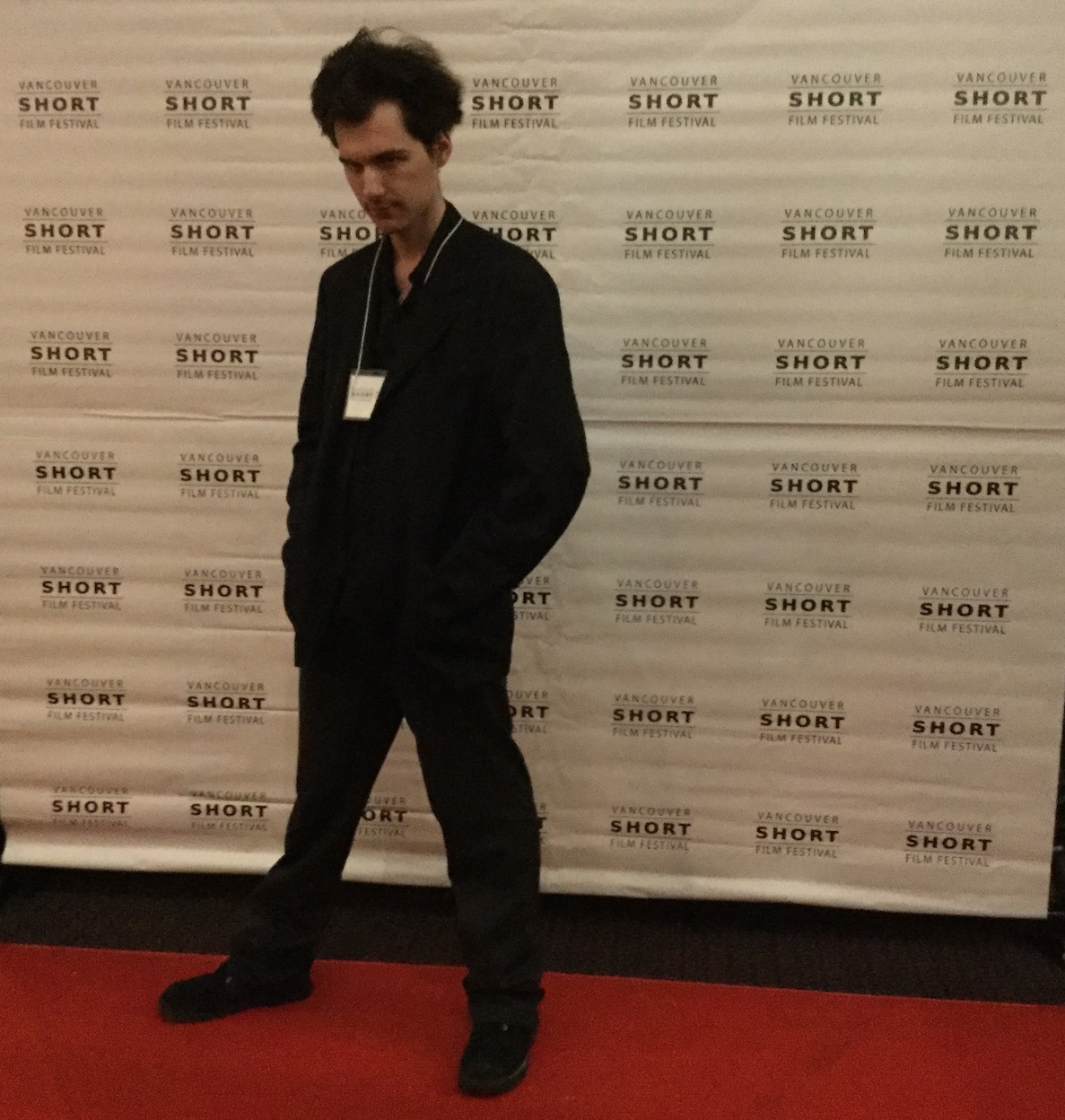 #VSFF18 has undoubtedly been one of the most fun and interesting events so far to help make this year of film an amazing one. VSFF, or Vancouver Short Film Festival, is like other festivals in the area of Vancouver, however its focus is short films. Because we all know less is more. And also because not everyone likes to make anything freakishly long too much anymore. This year’s festival was run by two well-known ladies in the industry, Marena Dix and Zlatina Pacheva, who like all women in the industry, do an incredible job no matter what it is and keep it cool while doing it. So everything under 30-40 minutes got submitted to this little festival, and there were so many submissions it was stunning. And while the one of the official hashtags of the festival was #keepitshort I’m sorry to say that this summary will actually be quite lengthy. So here’s a list of everything that happened at #VSFF18.

Opening Reception – I came a little early to this, being media and all but the bustle of festivals begun momentarily after they started letting in those who purchased tickets. It was a friendly atmosphere with a buffet of assorted food. And what I mean by assorted food is some of it was healthy and some of it was those mini-cake snacks and rather large donuts that had the flavours of gourmet desserts. Still the best way to start off a film festival and get people involved is to let them network for a while. What, were you expecting me to say something about free alcohol?

Programme 1 – Hosted by everyone’s favourite funnyman David C. Jones, the first program had different types of films to cause people to have different interactions throughout. Now, the first two I’ve already seen before, so my viewpoints on Akashi and Violet & June can be found here. Continuing on, another short in this program was Soggy Flakes, by the Affolter Bros. They came up with an interesting idea for the world of cereal. Since everybody’s diabetic, or going gluten-free (okay, maybe not everybody, sorry) what does that mean for the cereals we ate as kids? No sales, that’s what. A funny and very truthful short film. It also explained why I wasn’t allowed to eat sugary cereals as a kid. But one of the more interesting films that really got people thinking was Hollywood’s Greatest Trick. The longest short film in this program which told the story of VFX artists, and how they struggle in the industry. Anyone who knows me well enough knows I’m not fond of CGI as I know it sometimes drives people away from the story or is just used to show off. But after this short film was showcased, I’ve reverted that mild hatred and now I’m more upset with the film companies who don’t pay VFX artists fairly. Because that’s a worse struggle than waiting for a file to render. This film brings the point across and it could really provide the message of VFX in a way that people will understand better. It’s like a more clearer to understand version of that period in 2013 when VFX artists turned their Facebook profile pictures to solid green squares. Lions in Waiting was a nice little film which showcased a young boy named Ray who had to deal with struggles in joining a new hockey team and being comfortable with himself. The programme wrapped up with two funny short films. Chocolate Queen, which shows a hilariously true take on the one addiction worse than drugs, chocolate. FWD almost goes back in genres of both horror and comedy. I didn’t predict its particular ending. It was a great start to VSFF, but the fun was just beginning. It was FWD that got everyone (slightly) prepared for the next programme.

After Dark Programme – Everyone’s been expecting something like this for years. Hosted by Gigi Saul Guerrero (David C. Jones admitted he was too scared to M.C. this one), The After Dark Programme showcased ominous and chilling short films. Some say this programme was cursed. I almost have to agree with them because when I thought my pen had run out of ink, I later found out it was still working. The Man in the Rabbit Mask started this out, with the subject being your basic slumber party gone wrong. I’ve seen this concept before, but it’s a personal favourite, so I enjoyed this. Home was an extremely dark film about a detective who goes to explore an abandoned orphanage where he discovers something thrilling. An incredible film and I thoroughly enjoyed it. Down the Hill with Jack and Jill wasn’t exactly too scary to me, but the rhyme sequence through the whole short was enjoyable. The other productions, A Cursed Desire, Echoes In The Ice, and Bestia were incredible in both design and effects. And that was the end of the festival’s first day. I know it seemed short, but that’s what to expect. Don’t expect lots of jokes about height though. Really.

Filmmaker Luncehon – uhh, I wasn’t too involved in this. Kind of because I came a bit late. And because it was much like the opening reception, except it was done in partnership with Telus Storyhive, and the food choices of course, were slightly healthier. Same usual vibe, but that’s what makes festivals interesting.

Programme 2 – David C Jones managed to return and even stayed the whole day to host the rest of the of the programs. Before I can go into those, I really enjoyed some of these. The first was actually a personal favourite, High Energy. A little bit funny, and then turning into something that was so dangerously accurate, it was frightening. The short film shows a boy who thanks to his best friend, sees the (dim) light in Trump and the Alt-right. Every choice has its consequences. And that’s what this film provides in the message. I’ve actually seen some of these before so I’ll mention some other favourites. I really liked Handmade Film which provided a perspective in explaining the works of one of the oldest film cameras ever. As for other favourites, read my reviews on Mental, Methodic, and The Prince.

Programme 3 – Now I’ve already seen a good amount of these short films, so I’ll go right into some of the new ones which I enjoyed.  Metta Via which took place in the future, was a really cool and trippy film, showing a woman in a strange room where she regains memories. I liked how there wasn’t much dialogue in this at all. The Butterfly was a film about a struggling Mexican family who just immigrated to Canada. Our protagonist Carol is not only uncomfortable with this new setting, but a swimming test is the one thing that is sure to help her out in this case. That film really showed hope and lots of emotion. Send us Smokes was another example of jumping from one genre to another. Telling the story of a little girl named Adelaide who makes it her mission to deliver her cigarettes to her father in WWI. It got kind of silly when it turned into something of a musical, then it turned dark pretty fast. Everything else was pretty great too. In fact, most of these films just made people think.

Programme 4 – Starting out on this one was Multiverse Dating For Beginners. This short film was about a young lady named Ivy who experienced the strange feeling of deja vu thus having her talk to one particular guy from time to time. A very funny and interesting short film. After We Have Left Our Homes shows what the world would be like if music was banned. Sounds kind of like an anime concept, but it goes to a different beat. Pretty cool. Flash Flood was an animation about three people who talked about their gender identities. This one was pretty simple but creative at the same time. The Good Fight was a personal favourite of mine showing a young nun who wants to explore things outside of her vows and taking on something against the church. I didn’t expect it to actually go that way. It was impressive. It seems that quite a couple of these films sort of took place in the future, like Asleep and Up & Away, which really brought out some inner feelings within me and I also enjoyed Jessica Jessica which told the funny story of two friends who want to settle with somebody, but somehow they can’t. Wrapping up this whole thing was a personal favourite of everyone’s: Cypher. I’d link to my article on Crazy 8s (since that’s where it premiered), but instead I’ll simply say it showcases times in the late 90s after the riots when two different races are at each other’s throats: Asians and Blacks. Two gangs of hip-hop enthusiasts end a fight the only way they can: through rapping. A very well done film, with talented actors. It felt like the rapping session near the end was a heartwarming and tear-jerking moment for everyone. That whole scene was a more feeling-inducing, history-teaching (and less campier) rap-off made better sounding than those Epic Rap Battles of history/politics/youtube/whatever.

Awards Ceremony/Afterparty – Watching from the balcony, I got a good view of the Award’s ceremony. With awards hosted by judges Jem Garrard, Nicole G. Leier, and Marshall Axani, the awards ceremony went by pretty quickly with only one groan-worthy pun and didn’t even have any audience drumrolls. But it went well anyways, and of course Cypher got the most awards out of everything, it was the best short film after all. Shortly after that, everyone stayed around for the afterparty which consisted of drinks, glow sticks, an extremely healthy buffet, a live DJ, networking, and a Photo Booth. Then right around the middle, it was announced that the Audience Choice was Under The Radar, a documentary-like short film about Canadian scientists who worked to outrun NASA at taking radar pictures of the Earth. I learned a lot from that one.

To conclude, VSFF was a lot of fun this year, and I’m hoping it’s very much the same as of next year. Some of these films did premiere at The Crazy 8s already, which I previously covered, but it goes to show that anything that premieres at Crazy 8’s goes a long way. The festival may have not lasted super long, but it gave me a lot to write about. And a whole lot to enjoy.