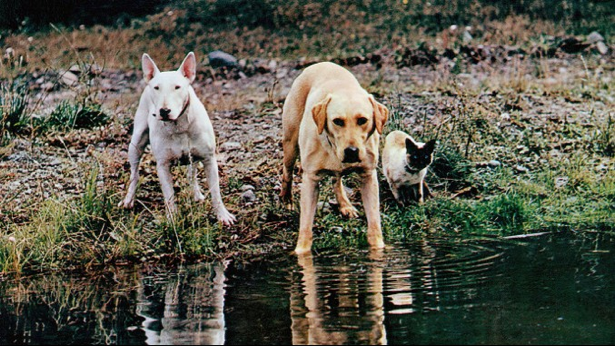 One of my favourite Disney films growing up was the 1993 wilderness adventure, Homeward Bound: The Incredible Journey; the epic tale of two dogs and a cat braving hundreds of miles of treacherous terrain to be reunited with their human masters. It wasn’t until years later that I learned the film was in fact a remake of an earlier Disney effort simply-titled: The Incredible Journey made some thirty years earlier and only recently that I finally came to watch it.

Based on the 1961 novel of the same name by Scottish author Sheila Burnford, the film begins with Luath (a young Labrador Retriever), Bodger (an aging Bull Terrier), and Teo (an impulsive Siamese Cat) under the care of kindly hunter John Longridge (Emile Genest) at his rural cabin while their owners; a family with two children; are out of the country.

When John takes an extended duck hunting trip intending to leave the animals in the care of his neighbour Mrs. Oakes (Beth Amos), the three animals mistake his absence for abandonment and make the snap decision to undertake the 200 mile journey home. A mis-communication with a note leads Mrs. Oakes to conclude that the animals have gone with John on his hunt thus their disappearance goes un-reported.

The arduous trek through hundreds of miles of Northern Ontario wilderness will test the three domestic pets as they encounter wild predators, unfriendly humans, and raging rivers, as they struggle to make it home to their owners even as a potentially deadly winter approaches.

Produced in the proud tradition of the classic Disney True-Life adventure series, The Incredible Journey features superbly-directed animal action against a rich Technicolor Ontario wilderness. The animal actors are incredibly well-trained and easily carry the film along with a little help from from reliable Disney-narrator, Rex Allen. It’s truly amazing the quality of footage the filmmakers were able to capture of their animal stars whether they’re simply frolicking or encountering levels of danger that would give the folks at the modern-day Humane Society a heart attack!

The mostly-Canadian human cast also conducts itself well enough with Quebec-born Emile Genest given the most well-rounded part as the animal’s former caretaker who must grapple with informing the family if he can’t locate their pets in time. The remaining characters that the animals meet along the way mostly function as plot points in an Ontario that seems to be curiously stuck in the 19th century complete with oil lamps, candlestick telephones, and wardrobes straight from Little House on the Prairie!

The film is told at a smooth, brisk pace wasting little time in setting up it’s characters and sending them off on their wild odyssey. It only really falters in it’s final act which sets up what sets up an intriguing stage of the journey, but ultimately leaves us with no payoff. The animals reunion with their family at the end also feels empty as we’ve barely gotten to know these characters, an element which the remake would ultimately handle with considerably more skill.

The Incredible Journey is the sort of simple, straightforward entertainment that Hollywood (including Disney) has largely abandoned for more marketable, big-budget blockbuster fare. But even all these years later, it remains an exciting, stunningly-photographed adventure tale that plays well to the whole family, young and old.