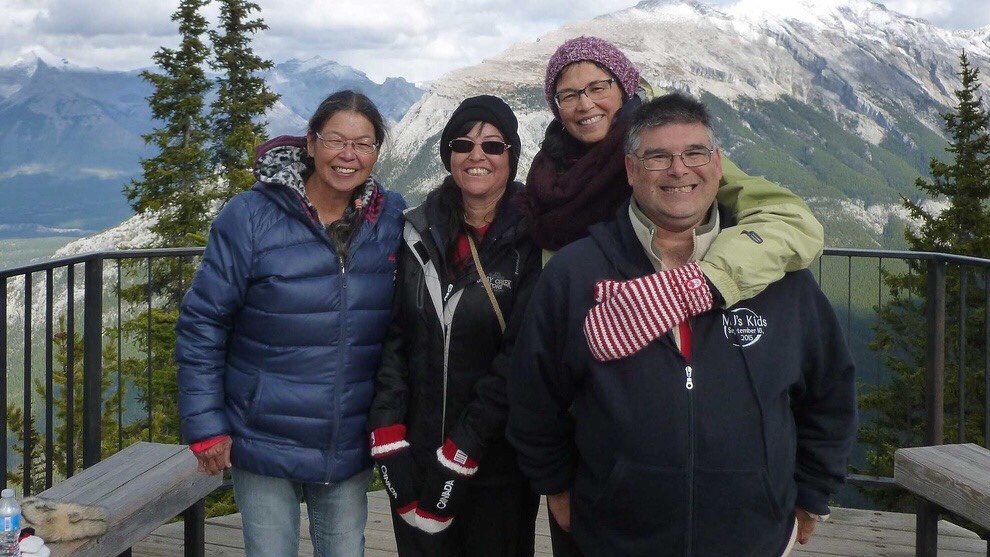 Most of us are familiar with the expression, blood is thicker than water. It refers to your family ties and your bond with them. What happens though, when you’re taken from your biological family and thrust into foster care? The family unit dissolves and you must do what is asked of you to survive and cope. As you get older, you adjust but still have questions about your roots. If you’re a victim of the Sixties Scoop, you likely have brothers and sisters out there that you’ve never had the opportunity to meet.

How difficult it must be to live in a country where the government representing its nation and their rights are also the ones responsible for tearing families apart because you were born Indigenous. How do you find resolve in your life and how do you find your true identity? One such victim of the Sixties Scoop is Betty Ann Adam. She spent years searching for answers and miraculously succeeded in locating her brother and two sisters. It was documented in the film, Birth of a Family.  I had the rare privilege of speaking with her to understand the hardships and the elation of finding her siblings.

“Thank you for taking the time to talk to us.  Can you first explain how you became separated from your family?”

“My mother, Mary Jane Adam was a residential school survivor. As a single mom living in Athabasca, Alberta she had all of her children taken away and put into foster care. We were part of the Sixties Scoop. My sister Esther was taken away at was 3 mths. and I was taken away a year later at the age of 3 and placed into a foster home in Prince Albert, Sask. I was 16 when my social worker informed me that I had another sister, Rosalie.  At this time I wasn’t aware of my baby sister Esther or my brother Ben.  Rosalie lived in the interior of BC and after we contacted each other we eventually lost touch after awhile because of the distance.  When I was 19, I discovered I had another sister and brother. I thought it would be great to be able to meet them all. I began to make some enquiries to the government for information but at that that there wasn’t computers and it was much more difficult to get answers.”

Betty Ann had felt very disconnected but after becoming reunited with some of her cousins, the pieces of the puzzle began to finally take shape.  She discovered that her mom lived in Vancouver and eventually got to meet her. They had formed a close relationship until her mothers passing in 2008.  She still hadn’t found her other brother and sister, Esther and Ben. She travelled to the reservation to investigate further and found their names on the band list. But still no one knew where they were. Eventually after much persistence she finally found them through word of mouth. Ben was living in Edmonton and Esther was living in California.

“How did the documentary come about?”

“The Truth and Reconciliation Committee (TRC) had been formed in 2008 for the purpose of uncovering and documenting truth while putting an emphasis on reconciliation between aboriginal and non-aboriginal Canadians. In the spring of 2015 Marie Wilson and some of the other commissioners were travelling cross the country going into communities and giving speeches to tell people that their work was coming to a close and discussing what they’d found.  I had attended a speech and was able to talk to Marie Wilson about my own story of finding my siblings. I had indicated that we hadn’t met yet but that we were all going to get together for the first time later that year. Marie’s first words were, who’s going to document it?”

Luckily, Betty Ann works as a journalist for the Saskatoon Star Phoenix and understood that her family’s story was very interesting and that lesson’s could be learned from telling it but hadn’t considered documenting it until the idea was suggested by Marie.  They had a later meeting where they discussed the proposition. Marie had pointed out the positive impact it could have on reconciliation across Canada. She convinced her that her story could help others to understand the impact the residential schools and the resulting Sixties Scoop had on Indigenous families.

“I began to see the merit of Marie’s point. I reached out to Tasha Hubbard, a Cree filmmaker in Saskatoon and English professor at the University of Saskatchewan. Tasha is an award winning filmmaker.  After I had a meeting with Tasha, she had contacted the National Film Board and they had agreed to produce it. I had asked my siblings if they were in agreement with going forward with the documentary and they said yes. They were so excited about the idea of meeting each other and having it documented just seemed to be another element of the experience.”

“Can you explain what the process of creating the documentary looked like?”

“In August of 2015, Tasha and the film crew had gone to visit everyone separately in their homes. Then on September 16 in 2015 it was decided that we meet at a neutral location. We had all flown into the Calgary airport with the film crew and Tasha waiting our arrival.  It was decided that we spend a week at a chalet in Banff to get reacquainted. It was a beautiful setting for introductions and was a much nicer idea to know that we were all someplace unfamiliar and new, discovering it together. We all came into it with open hearts and welcomed the idea of getting to know our birth siblings. We rented an SUV and drove to Banff with Tasha and the crew following. Once we arrived, the crew stayed in a chalet below us. They would mic us up and film for approx. 5 hrs. per day. The rest of the time we had our privacy that allowed us to further our connection.”

With the NFB as producer and Tasha Hubbard directing it, Betty took on the role as co-writer. They had a wonderful time getting familiar and sharing stories of their childhoods and exchange stories of their adoptive families. It was a wonderful time getting to know each other, says Betty Ann. She also adds that there were similarities in each of them. They all had the same smile. Betty Ann was the only child that had the opportunity to meet their mom.

I had the opportunity to view the documentary and it is emotionally gripping to witness the group encounter. I felt an overwhelming joy for them that they had finally found each other and were able to begin a new chapter in their lives. From a negative to a positive. This is a story which inspiration is derived from.

“When the cameras were turned on, did you choose certain topics to discuss?”

“Because the documentary has potential for educational purposes, I did try raising certain topics once the cameras were turned on. As Rose mentions in the documentary, we don’t have the luxury of being casual about this. If we’re going to be a family, we have to work at it.”

“How has the reaction been when the film was screened?”

“People that have seen the documentary have personally thanked me for having made the world more aware of our shared experience.”

Since making the documentary, it has been considered a new beginning. They’ve remained in contact and visit each other. They are very adamant about not calling it a reunion because it’s the first time they’ve met. They did however have their first reunion the following year in June at Rosalie’s home in BC. They brought their spouses and children and continued to build on their relationships.

“It’s not easy being able to visit each other as we all continue to age. Its expensive and we are all beginning to feel aches and pains as we reach middle age, but we have made a conscious effort to see each other until we can’t anymore. It’s not perfect but what family is?”

After the film was finished, it was scheduled to screen at festivals in May of 2017. Tasha and Betty Ann had taken it and travelled to California to Esther’s neck of the woods and rented a small theatre for the night for a private screening with some close friends. Betty Ann had seen the film numerous times through the editing process but it was the first time for her brother and sisters. They had some laughs watching themselves on the big screen. She says it was a very fun time.

“How did your foster mother react to the discovery?”

“She did express some hesitation. She was worried that I might want to trade one family for the other, but that was not the case at all. I’m still close to her and continue to call her mom and I visit her weekly. Her worrying was unfounded and she’s happy for me.”

Birth of a Family has since been accepted into the Cinequest Film and VR Festival in San Jose, California beginning in February 2018. This will mark the film’s US premiere. It’s also been purchased by CBC and was edited down from 79 minutes to 43 minutes. It aired on their documentary program, POV. It screened for the first time on the network on Nov. 19 and then a week later. The NFB have an educational platform called CAMPUS, where educators can request films and find educational material. Birth of a Family will be available to school districts that are subscribers to CAMPUS https://www.nfb.ca/education/campus/

Although statistics state that approx. 150,000 children were taken and sent to the residential schools, they were also thousands of children effected by the Sixties Scoop that much of the population are not aware of. Those additional numbers range from an estimated 20,000 – 60,000.

Tasha Hubbard directed the film and Bonnie Thompson produced it. Executive producer is David Christensen.  If you’d like to learn more about the Sixties Scoop, please visit the following link.