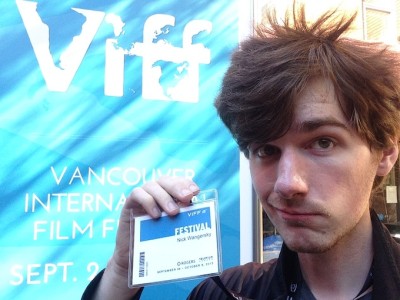 Quite the movie packed weekend for me; I went to multiple theatres, watching movies at random and seeing what they were like (the advantages of having a festival pass to all screenings.)

Golden Kingdom – Taking place in an isolated monastery, the movie shows what happens when the abbot heads out to attend to business, leaving the young orphaned monks to watch over things themselves. Witazara, the oldest, takes charge of things, and the boys stumble across many dangers and surprises. This one was actually kind of slow paced and the action seemed lacking, but that’s understandable for a movie taking place in an isolated area. I think I might’ve had a vision during the movie.

My Internship in Canada – Who says politics aren’t entertaining? An independent Member of Parliament named Steve Guibord is stuck between deciding whether or not aboriginals should go to war over a highway and sacred land. He gets assistance from an intern called Sovereign, from Haiti. I quite enjoyed this, it was hilarious.

Love, Theft and Other Entanglements – A delinquent in Palestine steals a car so he can sell the parts for his escape to Italy. But things go for the worse when he finds out the car belonged to Palestinian terrorists and even had a prisoner trapped in the trunk. This was intense and had its moments of humour. Nice use of the Palestinian area too.

Matter of Interpretation – Dream Free, Dream Real… After nobody shows up for a live show, an actress heads out to clear her head, break up with her boyfriend, and befriend a detective who can interpret dreams. This had its moments, but I felt it was a bit confusing at times.

Ninth Floor – This is a favourite among several folks in my string of connections, a documentary about the Sir George Williams Affair and how racist people could be four decades ago. The original people involved in this mess even spoke their opinions. Very insightful.

Charlotte’s Song – If mermaids were evil, oh wait… This movie is about a siren. During the time of dust-bowl, a young girl who’s actually a siren, because her mother was one, is stuck between choosing to go back to the sea or live with her father and sisters. I enjoyed this one, good and dark themed.

The Piper – Sticking to the subject of kid-like wonder gone horribly dark . . .  If the Pied Piper took place during the Korean war, the story would be a LOT more unsettling. Our protagonist is a crippled man with a dying son who stumbles into a nameless village plagued by carnivorous rats. But the villagers are suspicious of visitors. I liked this one even if it was truly unsettling.

Tale of Three Cities – Based on a real story of two Chinese lovers trying to get back together during civil war. Nothing told a more shocking story than this one. Truly enjoyable.

I’m going to try and stick to some of the films in competition and in the BC spotlight, but I intend to use my festival pass to its fullest. Worth every cent.