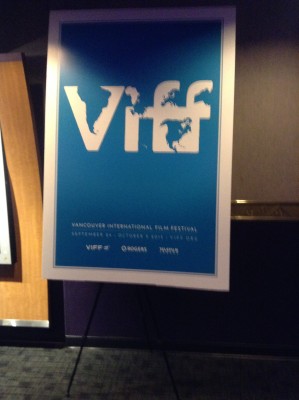 Finally, a little extra time in the day to see a bit of something different. Today was a slight change of pace as I started off by checking out the Reel Youth Film Festival. A film festival within a film festival. Also a chance to see what people younger than me can do.

First thing I have to say is, I’m glad I showed up early to this one as an entire flock of students from a private school managed to take up the entire lineup for this festival. Now nearly every movie was under five minutes long but they were all made very well. Some of my personal favourites included The Second Right off Main St, which explored an adolescent’s journey in a small town in Ontario, Out Again which features a teenager traveling painfully back in time while attempting to reveal his sexual preference, and A Life of Your Choosing which is told from a dog’s perspective and how free it actually isn’t. Despite the congestion and the fact that I was one of the few not wearing some kind of uniform, I rather enjoyed this mini-fest and praise the young talented individuals.

I went to see some more movies afterwards: Sound of Trees, Absence, and Hadwin’s Judgement. Much more on them shortly . . .

(Editor’s note: VIFF is just the beginning for the 2015/2016 Reel Youth Film Festival, which will now go on tour — you can even invite it to your own community. Details here.)