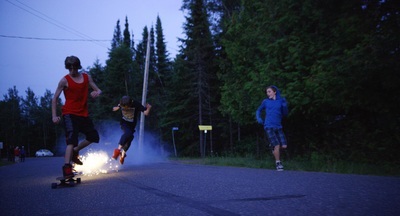 I thought I’d get a little more into detail about what happens in Sleeping Giant as it was probably the best movie I’ve seen so far.

Like all adolescence-based movies, we start with our protagonist having fun with his buddies. Adam (Jackson Martin) is vacationing at Lake Superior with his family, leading a simple life. Things get a bit different when he befriends Riley (Reece Moffett) and Riley’s cousin Nate (Nick Serino).

Riley and Nate live with their grandmother who’s currently helping Riley with his homework/summer school, as he managed to fail math twice.

Throughout the film, Adam hangs out with these two rebels and they  do all sorts of troublesome things. They convince Adam to jump off a cliff into the lake below, they get him to assist in stealing beer from the back fridge of a corner store, they set off fireworks. Adam also starts to bond with a girl named Taylor (Katelyn McKerracher). That’s when things get a bit out of hand.

It isn’t long before the three boys have trouble getting along and sooner or later, something really bad is going to happen to one of them. When Riley betrays Adam by making out with Taylor, Adam gets frustrated and attempts to break the two up. Things get worse from there. Adam can’t seem to talk to his parents about anything going on.

The shots in this movie were stunning, especially of the cliff jumping. The dialogue was very generic and even enough to make people laugh excitedly. I felt a range of emotions and relived teenage memories while watching the movie unfold — and it was interesting to see it turn very dark, though that is to be expected.