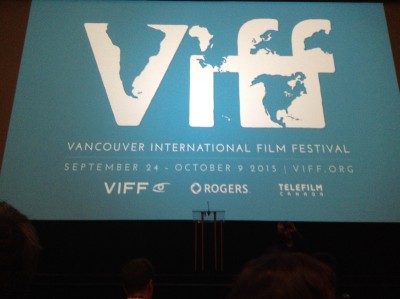 No better way to start off VIFF than to screen a movie and have a little room to network in before the show. Since I arrived pretty early, I had some time to weave my way through other well dressed folks and get a free glass of red wine. That’s what makes these events enjoyable. You want people to enjoy movie screenings? Provide free alcohol.

However since there was not a lot of space in the cafe lounge, I had to step out and head straight to the theatre where I waited for nearly 20-30 minutes for things to start up . And once they did start up there of course had to be some speeches. Speeches were made by VIFF’s chairman Dave Hewitt, program director Alan Franey, the director of opening film Brooklyn, John Crowley, Riaz Meghji, the co-host of Breakfast Television, Jacueline Dupuis and Francesca Accinelli the director of Telefilm Canada. All of them talked about the event, the movie, and wanting to conclude so everyone could watch the film.

After that, the film started, but no movie experience is complete without a few trailers first. They of course chose trailers from their sponsors like Spotify (which featured a freaky ad of family pictures singing to some weird song), a trailer for Rogers, a Telefilm preview, and soon the person behind me started gawking and expecting the movie to start. Well, it did. Brooklyn was a rather deep and interesting film, showing what it was like to immigrate to another country in old times. (Full review coming soon)

After the show was over Crowley got into answering a few audience questions, such as how he chose the cast, and explaining a rather interesting look at the end of the movie. Great way to kick off VIFF, and plenty more films to check out.