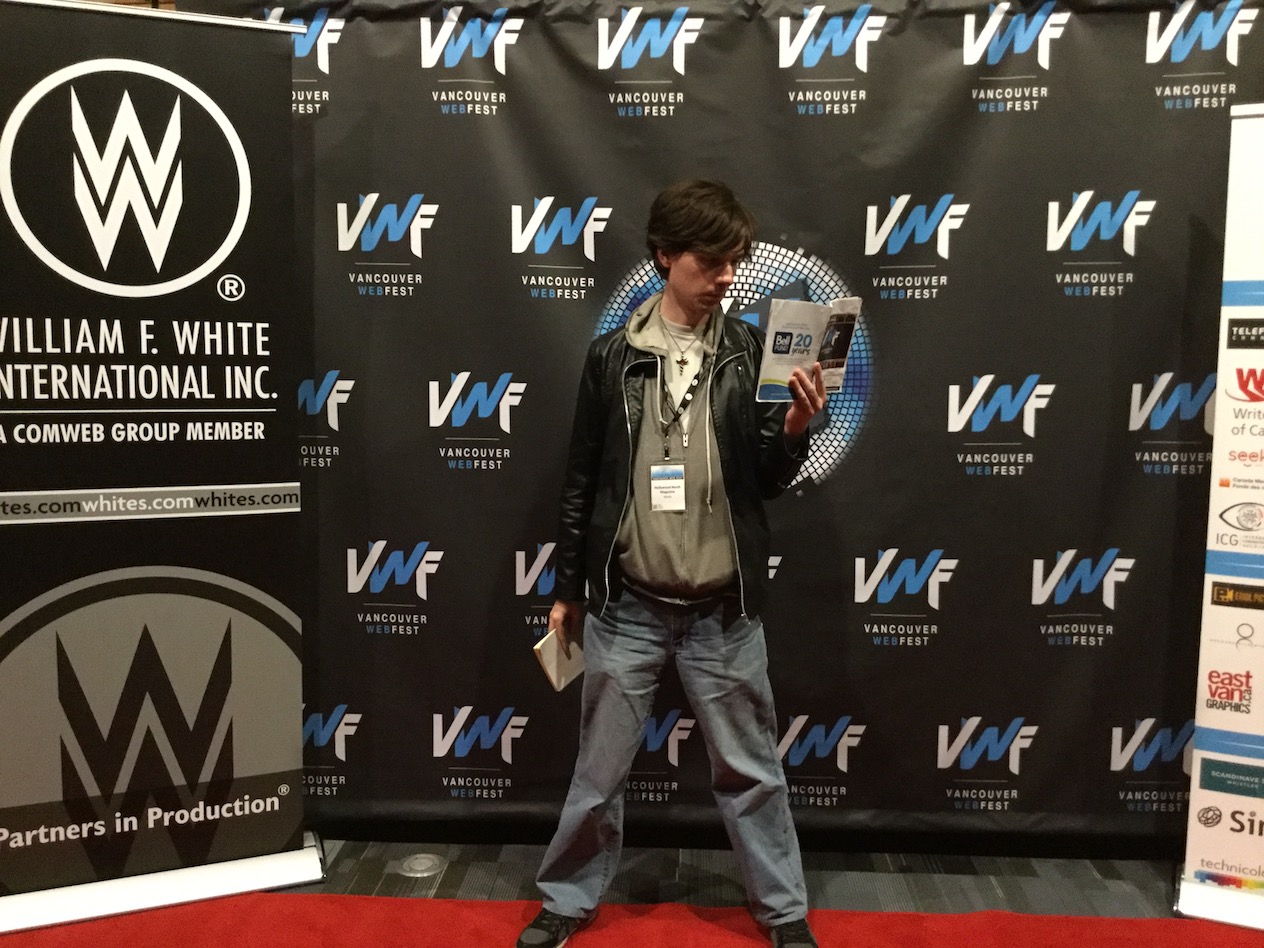 Vancouver Web Fest has had its share of changes over the years, and this year was practically a grand improvement compared to the rest. Because instead of being at the performance centre like the last few years, it instead was stationed at the west building of the Vancouver Convention Centre. Since this year was too much awesome to contain in one simple theatre, they decided to expand the amount of opportunities by not only including screeners but also fill two rooms with hourly seminars on how to succeed in the industry.  Smart move because if all of that was happening in the same place, the room would’ve exploded periodically. And we all know the annoyingly big deal about explosions when they’re being created or rendered (VFX joke). Not only that, but the view was quite scenic from out the windows. I’ll dwell deep on the different matters of this year’s festival, giving the gist of VWF 2018, since it was impossible for me to be in multiple places at once. Haven’t been able to since that cloning experiment went wrong, but that’s an off topic story for no time whatsoever.

Screenings – Since VWF celebrates the content of Internet-created series, screenings happened pretty much every single day of the festival in a tiny room where the amount of people always varied. Screenings came in many different varieties and came off as funny, some even disturbing and edgy, and of course, some being so ridiculous I have to wonder why the judges let some of these things get shown.

Panels – There have been panels in between screenings in the past, and the panels cover any topic available. Topics have included how to work with professional performers, making a successful web series, marketing, storytelling tools, and much more. Many other subjects and way too much detail for me to talk about but these provided a lot of info for me and anyone else attending. Attendance varied in these ones as one panel would have 50 people in the room and another would have less than 10. Still it’s nice to see that VWF is expanding further with their program. Workshops – Slightly similar to traditional 3-4 panelists, most of these were actually hosted by just one person and the experience was a little more personal and hands-on. Same variety of details though. Workshops, while not too many included using Adobe Creative Cloud, running a successful crowdfunding campaign, legal issues on the Internet, Descriptive Video (videos for the blind), VR bootcamp, and a few others.

Keynotes – Even less than workshops were Keynotes, which there were only 2 of. One had Ryan Couple which I didn’t attend, but I did attend the other which was hosted by Katy Newton who talked about how she worked with and set up things. Keynotes may certainly expand more depending on how things go next year.

Virtual Reality – The latest thing coming on the rise and give me intense headaches is virtual reality. Where you strap a headset to yourself and get trapped in another world. There were quite a few VR exhibits but I think the one that everyone was talking about was Epionia’s VR Walk the Plank. And it wasn’t about pirates, if that’s what you were thinking, it’s a VR exhibit that takes you in an elevator to the top of a building where you walk along nothing but a single 2×4 at an extremely crazy height. Most people felt extremely freaked out to be doing this particular exhibit. I however enjoyed it, maybe a little too much. The first time I went on, the plank somehow broke about halfway through. The second time went more smoothly as I found it quite relaxing. Apologies to Daniel St-Pierre, it was still a cool experience. If your company ever makes a therapeutic VR that helps with facing self-aware androids and the dangerous uprising of technology in the future, please let me know.

Functions – After checking out discussions and short films for a full day, it’s always fun to connect with other people while drinking alcoholic beverages and discussing projects. These just about happened every evening and some of them even supplied free hors d’oeuvres which seemed to be of the international variety. The first night, food actually cleared out extremely fast. Other functions have also included a breakfast sponsored by Telus, which not too many people attended until slightly later. This was quite the spread of food at that one, and it didn’t clear out as fast. On the night of April 20th, one function featured screenings of a short film (which will someday be a feature length) called Beast, and two episodes of Talking the ‘Bis. Beast tells the story of a sighting of a sea monster in a small town and one young boy named Daniel has an obsession with this creature as his father may have seen it before disappearing. It’s an ominous and amazing short film and I can’t wait to see what it becomes. Talking the ‘Bis however was something that went along with the theme of Vancouver’s most beloved and hated event of all time: 4/20. Hosted by Chuck Rifici, Talking the ‘Bis discusses the benefits of cannabis, and other subjects like edibles, drug laws, and your basic pro-cannabis talks. Functions were pretty sociable and fun. However, those drink tickets were obnoxiously pricey. Selection of drinks was okay though. Whiskey, whiskey, the singer’s gettin’ sore…

Awards Ceremony – What would VWF be without an awards ceremony? I didn’t even have to change much for this one. Since I was already in a suit for most of the day, all I had to do was put on a tie. Before the ceremony even started, what better way to have a photo op in front of the usual backdrop and grab a drink from the pricey cash bar? There was an interesting arrangement in the style of chairs. About 1/3 were the classic red comfy armchairs that VWF has been using for years, but 97% of those were reserved. I guess I got lucky to find one that was available. Every other chair looked like some metal dinner table chair and could connect with a little rack on the side. And hosting this event was the Mike Cavers of this year: David C Jones. Because everybody wants this energetic fellow to host their events. He knows how to rile up any joint, you could bring that guy into a church and he’d make sermons more fun. Shortly before the show, he brought up the sparkly star, Miss Soula-Marie from Eating with Soula. There were so many awards to so many series that I can’t exactly say if one in particular won lots of awards. I’m not going to list everything, but I will mention that the best of VWF was a web series called Inconceivable. Created by Joel McCarthy who’s known for his 48-hour film competitions, and other productions, Inconceivable tells the tale of a young lesbian lady who comes across all kinds of incidents, from figuring out who she is to an unplanned pregnancy that makes her feel unsure whether or not she should abort her baby. A funny show that explains the advantages and disadvantages of sexuality, pride, early parenting, and other interesting scenarios in a comedic relatable way. See it for yourself and you’ll see why it’s so good.

Vancouver Web Fest was an all-around fun time to be had. I’m not too sure about the scheduling but I will state that attendance managed to increase over the days making the final day the best day. I’m a bit surprised at the lack of concession sales and massage therapists and I kind of wish there had been a game show parody and a photo booth like last year. But everything was more film-based this year which is a good thing. The experience gave me lessons in filmmaking, a tote bag, a pin, another pass for my collection, and some stories for my non-existent grandkids. I gotta see how next year goes.

enjoy unibet on your phone