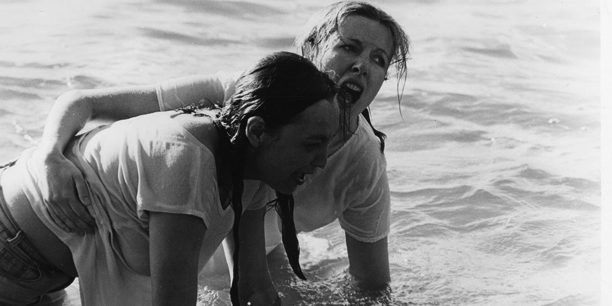 The decade of the 1980s saw a coming-of-age for Canadian cinema. Filmmakers who had cut their teeth on episodic television and National Film Board documentaries were beginning to mature and embark on more personal projects. Exemplifying this trend was Edmonton native Anne Wheeler who sought to tell the story of a powerful friendship between two women from different worlds in her 1986 feature, Loyalties.

Upper-crust Brit Lily Sutton (Susan Wooldridge) has flown from across the pond and then some to settle in with her husband David (Kenneth Walsh) in Lac La Biche, Alberta where he has just opened a new practice. With their three younger children in tow, Lily has her hands full moving into their new lake house. With David preoccupied at the office and social occasions, the two decide to hire Rosanne Ladouceur (Tantoo Cardinal), a Metis woman who David has recently treated for wounds sustained from her abusive boyfriend Eddie (Tom Jackson). With Rosanne having unjustly lost her job over the incident and her extended family of two children, a nephew and her mother barely over the poverty line, she readily accepts the position.

It’s a rough start as Lily and Rosanne don’t quite take to each other at first. Rose smokes too much and Lily comes off snobbish. Before long however, the two women find far more in common than their race, class, or background would have them admit. The two families soon grow closer with the Ladoceurs doing their laundry at the lake house (they don’t have a washer or dryer), and the Suttons being treated to Lac La Biche’s legendary Pow Wow Days.

Soon, a skeleton from the Sutton family closet rears it’s ugly head which threatens to shatter the bond Lily and Rose share. It is during this trying time that their friendship will face the ultimate test. Either way, life will never be the same.

Loyalties is a fine snapshot of people and places rarely depicted with accuracy onscreen. A full five years before Ridley Scott brought the adventures of Thelma and Louiseto the screen, Anne

Wheeler was ahead of the curve with her story of an unlikely friendship between two women, a relationship often more likely to result in loggerheads over a man in many other pictures. Susan Woolridge is in fine form as a displaced socialite trying to navigate culture shock in a new setting. She positively clashes with her rural blue-collar surroundings with her London fashions, impeccable accent, and forgetting which side the steering wheel is on. But her anxiety gradually melts through the runtime as she lets her hair down and settles into her new home. It’s Tantoo Cardinal who really steals the show with her firecracker turn as the hard-luck barmaid Roseanne who takes life’s hard knocks head-on with a chip on her shoulder and a wink in her eye. She brings years of baggage to her portrayal with no exposition needed. You almost forget she’s acting at times.

Kenneth Walsh is a true standout as the seemingly charming David. He’s also hard to talk about without spoiling a key twist in the film’s final act. What can be said is that he truly sells a key revelation about his character that you can sense bubbling under the surface throughout, but hoped wouldn’t be true.

The film is stunningly shot and rarely portrays it’s low-budget origins. Lac La Biche is beautifully rendered with shimmering lakesides and sunsets galore. It’s enough to make this former Albertan rather nostalgic. Wheeler sets a relaxed pace that adequately settles the audience in, but does a disservice to the film’s later acts. Some more judicious editing could have served the story better. There’s also a rather puzzlingly dark prologue that visibly clashes with the film’s tone. It was ostensibly added at the insistence of the film’s distributors, but the film would be better served without it.

Anne Wheeler hit a solid one out of the gate with Loyalties, proving she was a filmmaking force to be reckoned with at a time when Canadian films were a rarity (then again, aren’t they still?). It’s a shame it’s not more readily available as the 35mm print I viewed at the Pacific Cinematheque is apparently the only one in circulation and a limited VHS run is hard to track down, assuming one still has a VCR. However you come across it,Loyaltiesis a worthwhile film thats takes you to a dark place, but leaves you stronger on the other side.