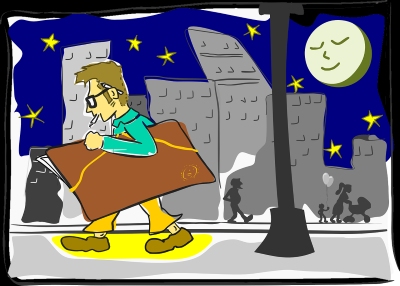 At the Ottawa International Animation Festival happening this month, the National Film Board of Canada will be showcasing some of its latest animations by aspiring upcoming animators all from NFB’s 10th Hothouse program along with pioneering animator Michelle Cournoyer.

Carface is premiering in the Narrative Short section of OIAF’s competitions. Made by award winning Claude Cloutier, this animation shows what careless people are doing to the planet. This is an environmental style of film; interestingly enough, it’s also going to be narrated musically.

Over in the Canadian showcase is the new premiere of My Heart Attack. This one is a rather personal film by Sheldon Cohen, as it is actually based on an event in his own life. One summer day, Cohen experiences heart problems, which gets him rushed to the emergency room quickly. This film reminds us life is not only weird at times, but also a little bit scary. Fiction isn’t always the strangest I suppose.

Michelle Cournoyer’s work will be honoured when she shows a project made of many films she worked on in a retrospective called Isolation Drills. Another showcase of her work coming out is called Blow Up, which focuses on a range of personal mind and body issues brought on by sexual abuse, alcohol and many other dangerous things.