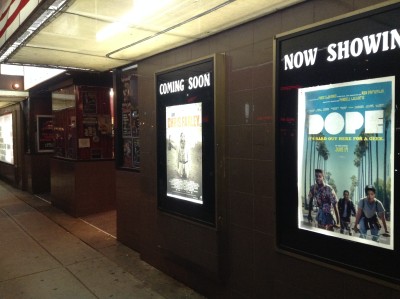 After the 15-minute intermission (some of the audience had disappeared — their loss) came Alice In the Dust, a short film which was like the story Alice in Wonderland — if it took place at the Burning Man festival. I have to wonder if anyone in the background signed a release form, or if they were too high to notice the film crew at the fest.

Another touching film was Broken Palace,  a documentary short lamenting the decline of independent theatres and how they’re going down fast. Thanks, streaming websites.

The next film was an animation called Written, the story of Antoine, who shares a passionate love for his only friend and hopes to have his own story written someday.

The last film was Rattlesnake, which showed a little girl and her father as they try to rush out of a desert to find medical help for her father after a snakebite. He of course dies, and she has to learn how to survive and move on.

The films were all incredible and well worth the time. It was also nice to see so many familiar people at this event as well as make new connections. If there’s another next year, I’m sure to attend that.