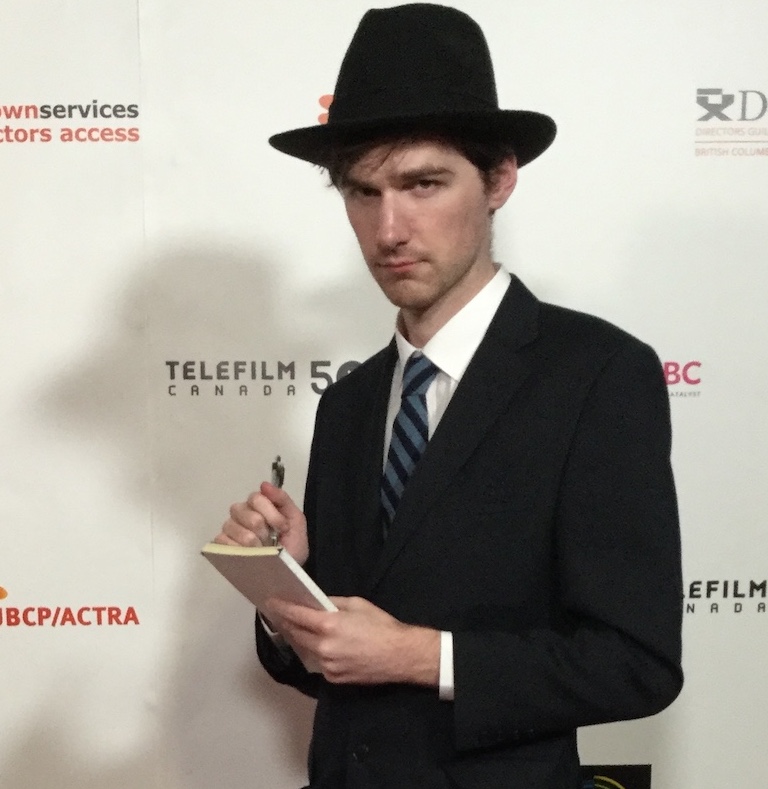 If local film events were sitcoms, Crazy 8’s would be Cheers, because it’s where everybody knows your name. With all the familiarity and fun going on, Crazy 8’s gets more congested each year. And this year is no exception. About every single floor in the auditorium was about as packed as a can of sardines. Normally, not many people take to the balcony seats, just the special guests. This year, that got filled. This year, the Gala’s host was David C Jones, who happens to be host of so many events lately. But that’s because he knows how to make things go wild. Or should I say go crazy. No wonder they put him in the position of MC. Jones brought a first-timer to the stage, and conducted the entire audience to making sounds/interjections you would probably hear if you entered into Crazy 8’s. Now last year, I said it was hard to hear people from below when you’re in the balcony, but this year was different, because the acoustics seemed to carry straight to the roof. That’s how audible everyone was. Following that was a speech from some of the board members and a few more from Crazy 8s producers Alicia Bernbaum, Stephanie Halber, Julie Bruns and Alexandra Staseson. This year it was 228 applicants, and as always, only 6 made it to the final round of making their movies. So let’s go into those movies, shall we? They’re going to be talked about for months, maybe even years.

CC – Last year, we had the four Affolter brothers write/direct a short. This year, we got two sisters who wrote/directed a short. CC tells the story of an android nanny who takes care of a woman’s daughter while she’s gone. The woman doesn’t know her daughter as well as this robo-nanny but feels she should be in her daughter’s life more. Another movie about the takeover of robotic overlords. I’ve seen the concept before, but it’s so deep and sad especially in this one. Lots of cool effects and a meaning story done well especially with a child actor (considering how hard those are to work with) and a heartwarming ending. Given my fear of the future, I never thought I’d feel sorry for an artificially intelligent device. Especially one that shared the name of an annoyance I once knew. A personal favourite of lots of people.

Extra-Ordinary Amy – The story of a little girl who loves to dance. But her dancing causes loved ones to die. Don’t you just hate when your passion brings bad karma? This, I can relate to. Amy is sent to a special home for disturbed children where she must accept who she is. This was really great, and intense. The story was very Stephen King-like and the character’s personalities were everything I hoped for.  I personally enjoy dark films about an ominous child, so this one sticks out as a personal favourite. And probably because I know some of the folks who made it. Specifically the writer and director. Zlatina, Topher, if you guys are reading this, I’m not just being nice. It really is my personal favourite.

Shuttlecock – Does anyone remember playing badminton? I was actually pretty good at that myself. But there’s always something that stops someone from making it to Olympic athlete level. And in the case of Winnie Callaghan, she doesn’t make it when her opponent hits her in the eye with the shuttlecock. Back in my day, you’d get disqualified for that. But nope, Winnie’s rival moves forward, and it’s up to Winnie to face her one more time. This was so hilarious to watch. The concept of the plot was so funny. Throw in some silly shuttlecock costumes made of laundry baskets along with an amazing ending and my laugh-o-meter activated at an all-time high. Interestingly, fellow writer Shaun Lang worked as an assistant editor on this one. Another great film, not as dark or ominous as the first two, but extremely funny. And if anyone has to ask, not that they would, I gave up badminton because despite my skill, I was misunderstood. Still am.

Right then and there, was a 10-minute intermission. The only thing I got to say about these breaks before and between the films, is that people have lots more time to talk at the Afterparty and I wish they would take advantage of that.

Bordered – Ray is a US border-guard who is dealing with serious PTSD. One day while driving home from work, he spots two Syrian refugees trying to escape US and jump their way into Canada. Well, it was a pretty dark and semi-realistic film. Chilling visuals, a very strong story, I don’t have a lot to say about this one. Nobody really, talked about it much afterwards…

Small Fish – Well, a small fish swims in a small stream, and streams are a very wet place. But what happens if it goes into a big sea? Well, that’s not too important, but the important matter is that this short film is a visual representation of an artist named Laurie who is rejected constantly and wants to be better known. I know this struggle myself. Another huge personal favourite of everyone’s, Small Fish didn’t need dialogue to deliver its point across. The visuals and the use of paint are stunning. The movements in this are also super crazy. Oh, and one of the Robbins twins has a minor role in this. A common holy grail in Crazy 8’s short films is either the appearance of Mackenzie Gray or Jacqueline and Joyce Robbins.

Gemini – This modern day and age is the uprise of virtual reality. A VR gamer named Angie is well known among her gamers community in Gemini, but who can guess what happens when she meets one of her gaming companions at the Subway station (not the restaurant). An intense conversation comes across the two, and it teaches the lesson not everyone online is who you expect them to be. And something else about sexual harassment. Pretty cool visuals with lots of meaning, but nothing I haven’t seen before. Nobody really talked too much about this one either.

And as you may have guessed, the Afterparty happened right afterwards. Well maybe not completely right away. Because all of the crew members on every production (in attendance) came to take a big ol’ photo on stage. That was probably the only kind of photo anyone took according to the Twitter Hashtag feed. And to top it all off, Extra-Ordinary Amy herself did a dance at the end against the word of David C Jones. Thankfully he didn’t die. Actually, nobody died for that matter. Now onto the afterparty. If the theatre was like sardine cans, the Afterparty at Science World was like Tokyo. I’m not just coughing when I say that the place was more congested than my throat when I had a cold two months ago. It also didn’t help that there were lineups for everything. Lineups for checking in, lineups for the coat-check, lineups for getting your photo taken, lineups for the chocolate fountain. Okay, maybe not lineups for the chocolate fountain. I don’t know if anyone wanted to go back to that after I got my annual chocolate facial. Other highlights of the festival included DJs in onesies, the mingling and connecting with people you knew, as well as those you didn’t meet before, a virtual reality exhibit much like Gemini, and playing around with stuff at Science World for old nostalgia’s sake. An even better lineup than last year, and I can’t wait until next year, because next year it’s the 20th year. Two decades of Crazy 8’s. Can’t Crazy wait!