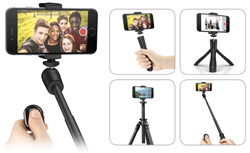 (ViaPRWeb) If you want to get the best possible video while using small mobile video cameras like GoPro®, compact digital cameras and stand-mount audio field recorders (or even, gasp, your smartphone), then iKlip® Grip, the new multifunctional video stand with Bluetooth shutter, can help. It’s specially designed to securely hold devices with a screen size from 3.5″ to 6″ — even when the device is in a protective carrying case. It does this while functioning as a desktop tripod, grip handle, monopod or tripod adapter.

IK Multimedia, the company behind  the invention, says “The secret to iKlip Grip lies in its ingeniously secure and expandable holding bracket system. It lets users precisely position any smartphone at any angle to capture photos, videos and audio. iKlip Grip features an expandable spring-loaded soft-touch rubber bracket that provides superior secure holding power. Repositioning the held smartphone is as simple as expanding the brackets to release the phone, then re-securing it. The iKlip Grip holding bracket features a standard ¼” threaded tripod screw mount so that it can be used with any standard tripod as a mobile device adapter.”

If you’re having trouble visualizing exactly how this works — I know I was — have a look at the video below to see the iKlip Grip in action. This sounds like something that could be helpful to both amateurs and professionals — anyone who just wants better, steadier video and sound. It should be in stores this month, costing around $/€ 59.99 (excluding taxes).