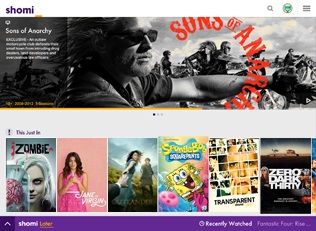 Earlier this year, we asked if it was fair that viewers in Canada should have to sign up with one of the Big Cable companies to get access to CraveTV and shomi. The general feeling among Canadians back then was “No, but that’s probably the way it’s going to stay.” But shomi has announced (via CNW) that “shomi is now coming to all Canadians across the country this summer!”

Though you can’t sign up just yet and a firm date isn’t set, you can sign up to be notified, via Twitter or email, when shomi becomes universally available. As an early adopter, you can get your first month free when you sign up.

(The company’s Twitter account is full of people saying “I’m only interested if I don’t have to sign up for cable” and shomi telling them “You don’t!” Can’t really blame people for finding it hard to believe.)

Streaming will be possible online, on tablet, mobile, Xbox 360, Apple TV, Chromecast, as well as set-top boxes for Rogers and Shaw TV subscribers; the service is also on offer to other distributors, the company says.

Shomi gives a sample of what they can offer that “the other guys don’t have”: Canadian exclusives such as Golden Globe®-winner Transparent, Mozart in the Jungle, and Catastrophe; exclusive day-and-date releases of hot new series including iZombie and multiple award-winning Jane The Virgin; top-notch Canadian content including Vikings, Rookie Blue, and Mr. D; and past-seasons of some of the most popular shows on television, featuring Modern Family and Sons of Anarchy.