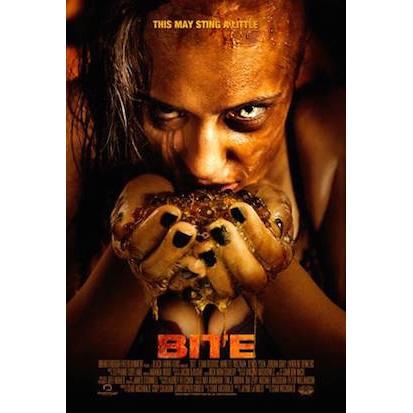 (Via WireService.ca) Bite, a new horror film directed by Chad Archibald, will make its world premiere at the Fantasia International Film Festival beginning July 14th  in Montreal. It’s brought to the screen by Breakthrough Entertainment and Black Fawn Films – the team behind the breakaway indie-hits Antisocial and The Drownsman.

In this film, “everything can change with a single bite.” Bride-to-be Casey (Elma Begovic) is bitten by an unknown insect during her bachelorette party. Soon, wedding anxiety sets in — but that’s not all. As Casey tries to call off her wedding, she also starts exhibiting insect like traits (” creating a hive that not only houses her translucent eggs, but feeds on the flesh of others”).

“Making this film has been an exciting ride,” says director/producer Archibald. “It’s scary, sexy, funny and gross, and after seeing a small group of people test screen it, I can’t wait to see how a theatre filled with genre fans are going to react at its world premiere in Montreal!”