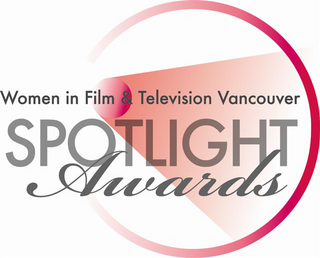 Women. Is there anything they can’t do? Don’t answer that, please. Women in Film and Television Vancouver (WIFTV) has been working for so many years to recognize the strong-willed women who take power and make history in what people call a male-dominated industry without realizing the value of equality. For the 20th year in a row, WIFTV’s annual Spotlight Awards Gala put on a magnificent show giving awards out to the greatest women the industry has ever seen for their outstanding work and/or contributions to advancing women in the industry. As Sarah Kalil, President of WIFTV, has stated it is really important to celebrate women’s achievements, a fact I agree with myself very thoroughly. And through a very difficult process of selection, 12 women from many different stages of life were honoured with exclusive awards. Hosted by Tracey Bell (her 3rd time doing so), her quick and simple performances made the night more entertaining as she portrayed last decades pop-stars (Lady Gaga, Katy Perry), classic singers (Cher, Celine Dion) and even Maria from The Sound of Music. Bell’s live lip-syncing/interaction with the audience got everyone laughing, joining in, and having some good fun. The buffet was amazing, with a wide spread of delicious food, and a bar that served some quality beer and wine. Awards were presented by a variety of other women in the industry who had made an impact as well as a few men, because hey, despite celebrating women in film, men were invited too. All genders actually. Women do make men after all and lots of men respect women, so it’s only fair.

Now for the award winners, they are truly amazing. The speeches they gave were inspiring, heartwarming, and incredible. Some of these winners like Loretta Todd, Arielle Boisvert, and Amanda Burke have been covered by Hollywood North Magazine, and they still shine to this day. Quite a few of these special ladies I am familiar with myself, even knowing them well, such as Nadia DiMofte, Marie Clements, and Kim Guise. And of course, I have to mention everyone else as well. Camille Sullivan, Jody Wilson, Anaïsa Visser, Angie Nolan, Anna Serner, and Anita Adams. All of these amazing women are incredibly deserving of the awards they won, all presented by the greatest sponsors the Vancouver film industry could ever ask for. The businesses that helped make this night possible were Thunderbird Entertainment, UBCP/ACTRA, Matrix Production Services, CMPA (Canadian Media Producers Association), Finale, Encore, Capilano University, BRON studios, Troika, the PAYS (Please Adjust Your Set) initiative, Director’s Guild of Canada, Teamsters Canada Local 155, Trembling Void, Line 21, and Steamworks Brewing. I’m very grateful to have attended the 20th year of this amazing event, and hope to see many more in the future. It could- I mean, it should happen.