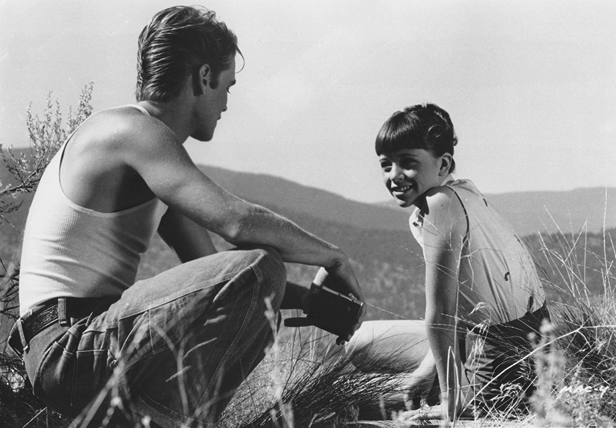 A quick glance at the careers of Albertan Anne Wheeler and British Columbian Sandy Wilson reveals some interesting parallels. Aside from being contemporaries, the two women began their careers with short documentaries before moving to features in the 1980s that helped to put English-Canadian cinema on the North American map following years lacklustre tax shelter projects. Wilson’s projects often exhibited a semi-autobiographical bent which figures heavily into her debut feature, My American Cousin.

“Nothing ever happens” in Penticton circa 1959. At least according to 12-year-old Sandy Wilcox (Margaret Langrick),who finds herself bored to tears on her family’s Okanagan ranch. Excitement soon arrives in a red cadillac as her older Cousin Butch (John Wildman) arrives in town, apparently on a solo vacation from California. Her father (Richard Donat) agrees to put the teen up at their lakeside house and take him on as a cherry picker on his orchard for the summer.

It’s not long before Butch begins to attract attention with his hot-rodding ways winning the admiration of the girls, the envy of the guys and the scorn of the law. Sandy slowly finds herself smitten with her cousin who only sees her as a kid. Yearning to break free of her dull and repressing surroundings (the radio stations only play rock-n-roll once a week!), Sandy begins to form a plan to run away with Butch when he inevitably returns to California. But a secret from her American cousin’s past may very well derail these best laid plans.

The film plays very much like a female-driven counterpart to Stand By Me minus the R-rated content. Director Sandy Wilson clearly made the right choice to cast Margaret Langrick as her 12-year-old avatar (despite apparent resistance from her producers). The young thespian capably takes on the angst, sassiness and sweetness that the role demands and shines in every scene she’s in. John Wildman is adequate as Butch. He certainly has the looks and swagger for the role but can’t seem to muster the star quality that would justify him gracing the film’s poster.

The cast and large is put at a disadvantage by rather under-cooked dialogue .“Sometimes things get so mixed-up, I just feel like I wanna explode” Butch blandly laments to a local crush while cruising through the hills. Development of the film apparently began in 1972, so it’s quite surprising that the script often minds itself mired in mediocre TV-movie territory. Surely another draft could have polished things up. Matters aren’t helped by several under-whelming performances by the film’s supporting cast (Sandy’s friends especially) who almost appear to be reciting cue cards at times.

The movie is blessed with gorgeous location photography of the Okanagan Valley by Cinematographer Richard Leiterman. The filmmakers have a real love for the area and it shows. They also do a stellar job of depicting the period with top notch production design plus a jivin’ rock n’ roll soundtrack littered with both recorded and covered hits like Sh-Boom, Save the Last Dance, and Sea Cruise by Frankie Ford.

My American Cousin is a solid coming of age story that rather ironically ends up being the poorer country cousin of American independent cinema. That being said, the story’s heart manages to shine through the clunky dialogue and stilted supporting performance. In fact, it may just encourage you to take that Okanagan vacation you’ve been planning all the more sooner.