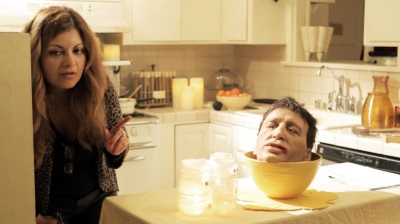 We mentioned earlier that A Tricky Treat, the short horror comedy by Quebec’s Patricia Chica, had picked up four awards at the Macabre Faire Film Festival: Best Short Film, Best Director, Best Editor, and Best Special Effects. The four-minute film tells the story of a man kidnapped by an eccentric family on Halloween. But that’s not the only news from ChicArt Productions.

A Tricky Treat will also make its Los Angeles premiere at Screamfest, America’s largest and longest running horror film festival, at the TLC Chinese Theatre on Wednesday October 21st at 7:00 PM. It will also continue on the festival circuit, including the Saskatoon Fantastic Film Festival which begins today. For the latest updates, see the film’s FaceBook page.

Director Chica says,”I’m extremely honored to share A Tricky Treat’s success with my team who helped bring it to life…or in this case…a macabre end!” But to her, it represents more than an achievement for herself and her team, as she adds, “These awards represent four great reasons to support women directors coming up in genre filmmaking!”