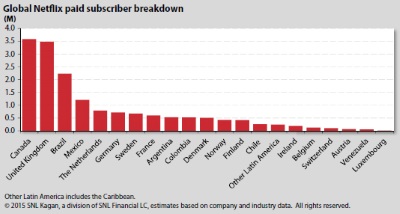 (Via PRWeb) Canada was the site of  Netflix’s first international launch, back in 2010, and there’s no doubt it’s become a part of life for many of us here. About 30% of Canadian homes with broadband use the VOD provider. In fact, Canada is the largest non-U.S. consumer of Netflix services. So how is it working out as an international business venture? That depends how you look at the numbers.

Netflix Inc. reported today that it “has seen strong growth in its non-U.S. markets thus far” but its “international business has yet to turn a profit.”

Despite the rising percentage, the company reports “The international division is not profitable, however, losing $159.8 million last year, although that is an improvement over its 2013 loss of $274.3 million.”

Still, they’re optimistic at Netflix. The company estimates turning a profit with its international division by 2017. Meanwhile, it’s not about to cut service outside the U.S., and in fact is planning to be open for business in 200 countries by the end of 2016, up from the 50 countries where it now operates.

Among those countries, the United Kingdom is a close second to Canada when it comes to Netflix subscribers. Brazil is in third place, and the company says Latin America as a whole has “had some pretty significant improvements.”

These figures come from an analysis by SNL Kagan, a division of SNL Financial LC.