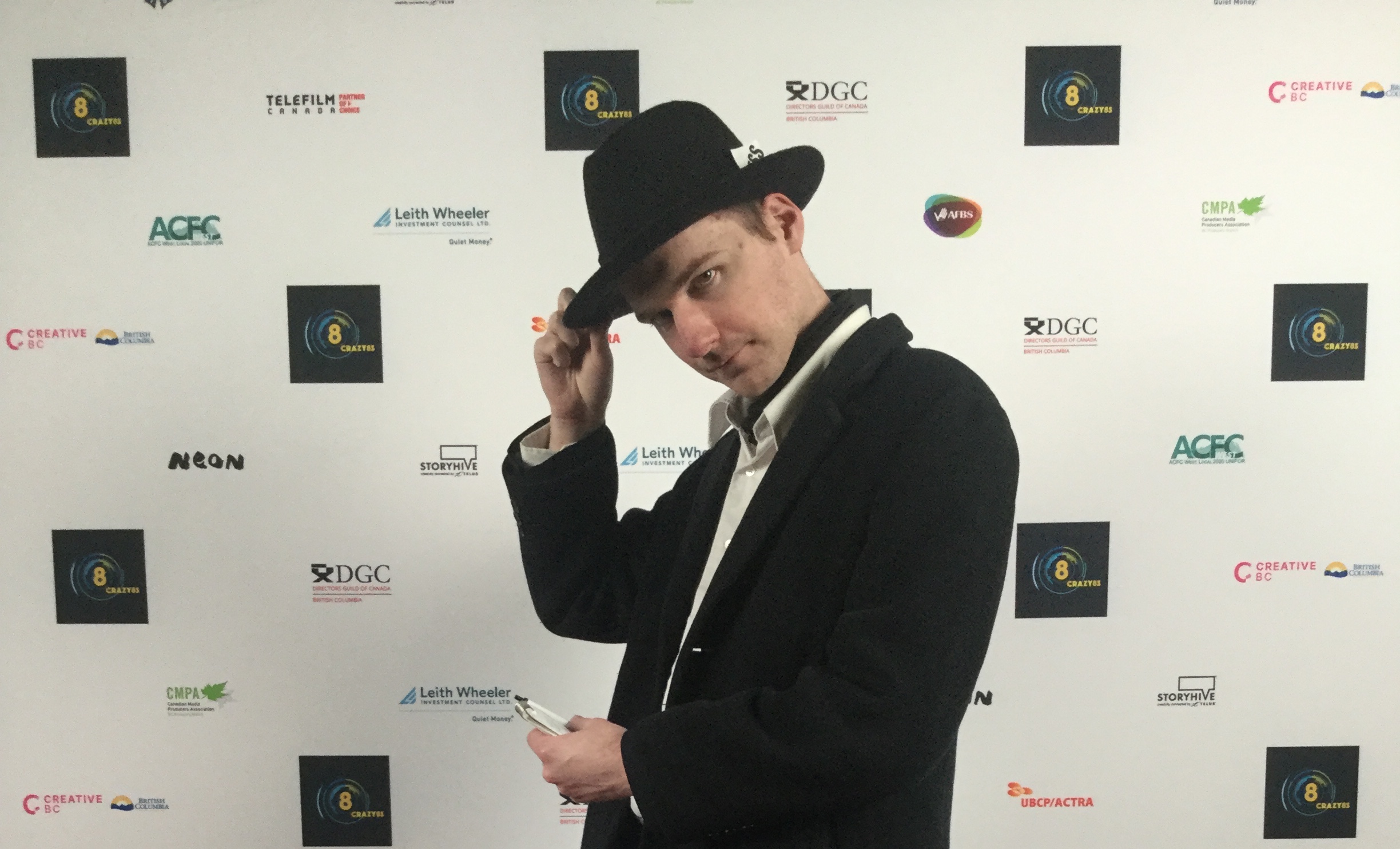 Or maybe the craziest part is I haven’t done an event summary for Crazy8s in a long time. Yes, it’s true. Before this, I did a live-tweeting of the event, and before that, I toured the sets. Anyways, it’s nice to get back to some of the classic types of articles before a pandemic got me into interviews and such. Anyways, that night was a night that no one should ever miss, and as usual I enjoyed it. Tonight’s was a little different from your usual Crazy8s event because it had a theme. It had circus decorations and treats, and even the kind of performers you’d see at a circus. I have to give shoutouts to the people who came up with the creative, but I also have to give shoutouts to Paul Armstrong (who I’ve known since I was a PA on Lawrence and Holloman) and Erin Mussolum (who I don’t know, but she keeps appearing in my friends suggestions) for all they’ve done as it was their last year operating/directing Crazy8s and now they’re moving on to great new adventures together in the film industry. Now step right up and read up about this fantastical event.

Opening Reception – Being Media and having an all access media pass always has its advantages. Since I was first in line at the all access line I got in first to this to look around, try complimentary champagne and an assortment of snacks such as cotton candy, flavoured popcorn, coloured tortilla chips, and gigantic pretzels. Again adding to the circus theme, there were circus decorations, a circus tent backdrop for photo ops, and March of the Gladiators playing on the loudspeakers. Though the lighting was a lot more darker and ominous this year, making things kind of look like the setting of a Batman cartoon series. Still, great experience to mingle with those you know, and get a taste of the greatest show in Vancouver. (Nothing against you guys at Cirque du Soleil who are currently in Vancouver) 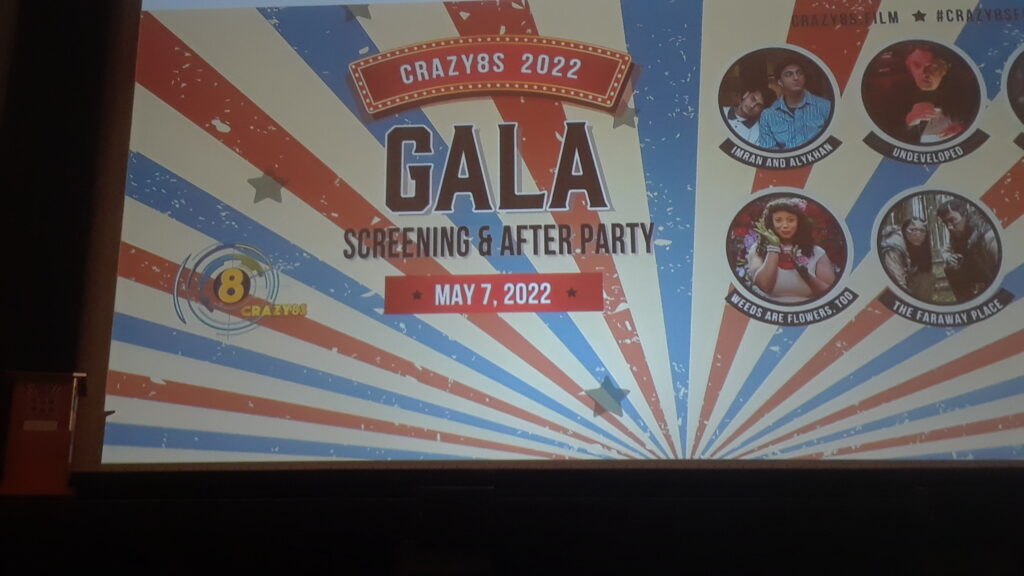 Opening – First, everyone shuffled into the lobby. Okay, maybe not everybody. Some people had to make some rounds first because a lot of us haven’t connected with each other in person for a long time, so the lobby was packed with all kinds of people. I’ve interacted with quite a few of them and I have to say it was quite an experience. Once the show finally started, the lovely Jill Morrison opened things up as an excitable host to really hype up the place and get people in their seats. Aside from her, we got a lot of guests, including Bob D’Eith (who was a former singer that had Neill Blomkamp as his Visual Effects director), Pete Fry, Allan Harmon (a favourite of everyone’s), Angela Moore, and a few others. Also, the entire Crazy8s Board came up on stage as well. It was loaded with speeches, but that’s what it takes some times to get people to quiet down before a BTS movie. Oh, better get to that.

Behind-The-Scenes – There was another like this at the last in-person event, and this year’s was a bit different. The layout of the shots for one, and who was involved. But ultimately, it featured directors sitting in a chair talking about the experience and where their film concepts came from. They also talked about the rain that almost dampened their shoots but didn’t damper their spirits. Every time a director came up on screen, they got mad respect by people who cheered excitedly. This also prepared us for the films coming out.

Imran and Alykhan – A love story between two boys at a Muslim camp. Even though it is forbidden by the bossy counsellor, they still choose to go along with it anyway even sneaking out at night. This story was both funny and powerful. But things really took a turn near the end. The director based it off a real life experience saying he fell in love with a boy at a camp, only for the boy to break his heart. At least that boy gave him inspiration to tell a story.

The Gold Teeth – One of the more disturbing films was this one, all about a refugee from Afghanistan named Sahra who is need of a dentist for a very intense operation, pulling teeth from her father. Not just any teeth, golden teeth. But the only one she can find is an Iranian ex-dentist named Hamed who has no intention of going back to dentistry. Especially not on the kind of person he comes across. What do I mean by that? Let’s just say the details of this film were tense and gruelling. But it was quite a story to be told. Hopefully no one in my family will have to resort to replacement teeth made of gold (the closest anyone has ever gotten was stainless steel)

Weeds are Flowers, too – Evelyn has moved into her new home with her husband and is eager to take on a new interest in gardening. Sadly, gardening isn’t easy for her. For some people, like her next-door neighbour, gardening is particularly easy, thus making poor Evelyn jealous. Despite lack of encouragement from her lazy husband, and getting controversial stares from people in the neighbourhood, she moves on to prove she can plant a mini-garden of Eden. This was a film that was hilarious and then got twisted. 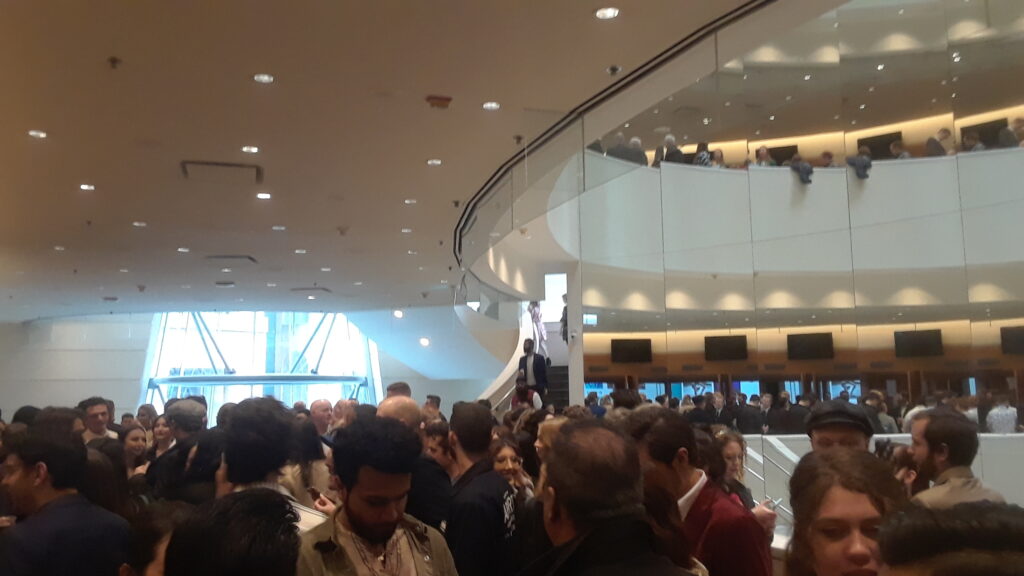 Right here, was an intermission. More crowding but at least I met people.

Undeveloped – Paul is a war veteran who runs a camera store. Years later, he gets reminded of something that happened years ago that comes back to haunt him. When he meets an old friend named Kyle from his war days thanks to reconnecting via his granddaughter, he feels both Kyle and himself are in grave danger. This was a beautiful film that turned out pretty sad.

The Faraway Place – Father and daughter live deep in the forest. Unlike most people, they have horns growing out of them. Hmm, sounds like something one of my former instructors wrote. Anyways, they have to lay low because a cult is planning to hunt them down and kill them. It was a chilling and dark story, and one of my personal favourites.

Consumer – The story of a 13-year old named Rein, who feels she’s too overweight and wants to fix her image. She buys herself a couple of weight-loss pills and hopes to look better amongst her peers, but the voice inside her head tempts her to start eating like crazy. This film had questionable subject matter, and it got out of hand real quickly. Also doesn’t some of this sound like the subplot for Requiem for a Dream? Oh well, it was interesting to watch.

After all that, there was a photo op with the film crews, and Jill even went into a crazy rant on how films were made during the crazy 8 days of a Crazy 8’s film shoot. There was a fair amount of applause and eventually that was followed by a slow shuffle to the shuttles as everyone went to the afterparty.

Afterparty – The afterparty didn’t feel as congested for some reason, which did help with moving around a little more. Keeping up with the circus theme included three popcorn with sweet flavours, stellar performances by Hula Hoop Artist Renee Mak, some fire jugglers, and a tall guy on stilts who had to crouch just to take the elevator. There were also some DJ’s dropping beats. Nice to bring back dancing again, but there weren’t many people on the dance floor. I guess people are still struggling to get back into things before COVID turned everything around. Still some sick beats though. 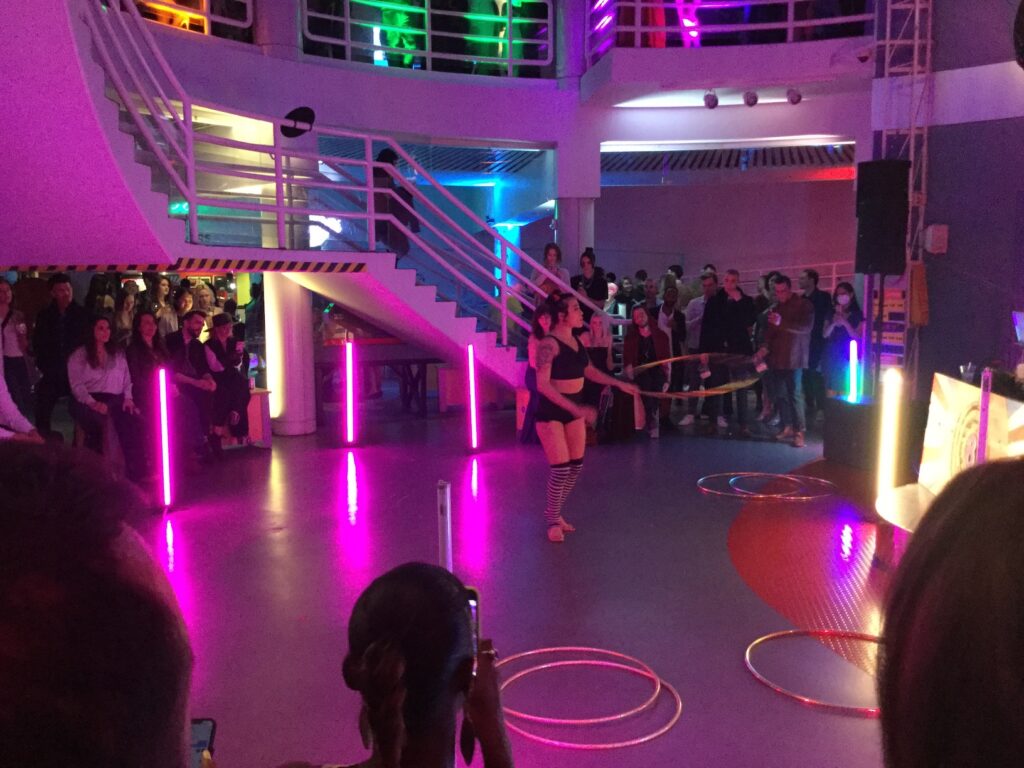 That was about it for the showcase. Crazy8s is starting to get better and better, and I feel this was the best year ever, so Paul and Erin left on a high note and can move on knowing all the work they’ve done over the years has paid off. From now on, they can sit as regular audience members and see how Crazy8s will evolve even more. I can’t wait to see what the new directors of Crazy8s (both the films and the organization itself) will be doing for years to come.