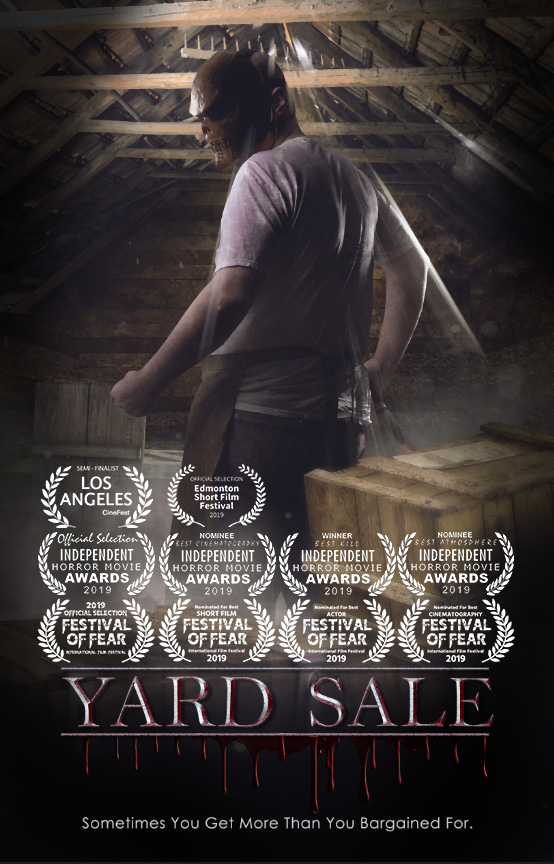 Especially the family in this short, who stumble across a yard sale in the middle of nowhere. As Jeff (Garry MacLean) is driving his wife Claire (Shawna Pliva) and their daughter Alex (Keaira Pliva) to his mother’s house for the weekend, they notice a sign about a yard sale just up ahead. Since Alex needs to go to the bathroom and Claire thinks Jeff will find something cool they stop to the house where the supposed yard sale is. First coming across a creepy old guy shovelling snow (Bill Baksa), Claire and Alex step inside to use their bathroom and Jeff checks out some old fashioned stuff displayed in the garage that doesn’t really interest him too much. But when Claire and Alex come back to look through the garage sale as well, they discover something disturbing and unsettling. So they have to leave soon before it’s too late.

Yard Sale is a good example of horror taking place in a cold wintery location, something I seldom see. The scenery gives a chilling Canadian feel with some edgy horror that you seldom see in Canadian films (BNG type horror which doesn’t come often). The characters are well developed and really make you feel. Also props to Garry MacLean for acting, producing, writing, and even providing wardrobe this great short film. The effects and blood makeup are so realistic it can tingle one’s senses. Great visuals, great plot, professionally made with a small crew to make one of the most twisted story I’ve seen in quite a while. Yard Sale has already made quite a lot of awards through festivals, including winning awards like Audience Choice at the Festival of Fear, Best Horror/Suspense at Edmonton Film Festival, and Best Kill at the Independent Horror Movie Awards. Given the reputation, Yard Sale will kill it at so many more festivals.