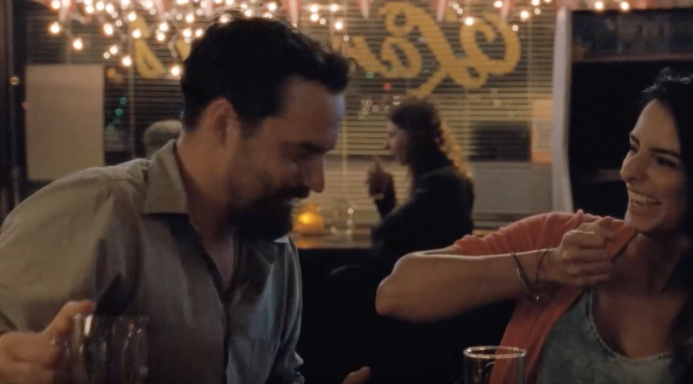 Win It All is a one man show. Jake Johnson has been working towards this. Beloved on New Girl, he has since launched himself, with the help of indie filmmaker Joe Swanberg, into a respectable category of up and coming actors realizing their potential. He has finally planted his feet.

Johnson reminds me of a lot of classic leading men over the course of Win It All, despite playing to a few of the strengths for which he’s become known. Of all the leading men, I keep coming back to Jack Nicholson. This is a role that would’ve gone to him had it been made in the 70s.

Eddie is a gambling addict. He works on occasion some sort of low level job as a traffic controller outside a venue. After a hard day of scraping by, he arrives home to find an intimidating thug with whom he’s semi-familiar (enough to know he should be afraid), who makes an offer. He’s going away for a while, and he needs Eddie to store a bag for him until he’s back. Don’t look inside the bag. Don’t touch the bag anymore than is necessary. If all goes well, Eddie makes $10,000. Of course, he accepts. He needs the money. He can barely afford a sandwich and coffee at a corner store — in fact he can’t, he just takes both. Of course, things go awry. After a lengthy, hilarious preamble to sitting in front of the bag, looking at its contents (“Oh no… Oh no, oh nooo.”), Eddie dives headlong into a situation that will inevitably lead to trouble.

The building blocks of Win It All are unoriginal. That doesn’t matter. If audiences are familiar with the general plot turns of a genre’s story, and the filmmakers understand this, they and the actors are able to put their effort elsewhere.

Swanberg doesn’t really do anything new here, but that’s also fine. He’s had more than enough time to work his indie style out. Grainy. Seemingly improvised. Handheld. Smoothly scored. All of this means it’s up to Johnson to do something new — a blessing and a curse. With all of us familiar with the other aspects of the film, he’s the last line of defence against the too often warranted criticism of “unintentionally unoriginal,” which is not a good look.

Everyone involved should feel relieved. Not only is the classic rise-fall-possible redemption story told very well, there’s a sweet romance, which grows at a steady, satisfying pace, in which for once the woman doesn’t bear the burden of the main character’s flaws.

Johnson wields his familiar charm sharply using it as a way to anchor his more exciting experiments, when he becomes uncomfortable, angry, desperate. There are times when he seems truly unhinged, allowed to engage with his surroundings in a way that might surprise everybody. It’s clearer in Swanberg’s films than almost any other modern directors’ that the actors are aware only of point A and B, and it’s up to them how they want to arrive there. With newcomers, that’s a recipe for disaster. But as I said, this has been a long time coming.

Win It All is deceiving. It’s very funny, no doubt thanks to its cast, which includes Keegan-Michael Key and Joe Lo Truglio (Brooklyn Nine-Nine‘s Charles and Superbad‘s “I didn’t even effing see you, man!”) They too, are a nice surprise. Key plays a sponsor who’s fairly contained. He’s responsible. He’s the stabilizer to Johnson’s thrill-seeker. Lo Truglio is something else entirely: A responsible brother, husband, father. Most importantly, he is taken seriously. All of his past characters have been dolts or pervs (loveable or not). Here he is someone you can respect, and not because he’s the little guy who earns the courage to stand up to his more intimidating peers. He has the courage from the start. He’s just emotionally intelligent and well-meaning. He is the force to be reckoned with.

To date Johnson and Truglio have not played their characters with more affection or attention.

Then there’s the cinematography. The cleanest and strongest in Swanberg’s filmography. Then there’s the small details, the ones that may actually make you smile. They’re just pleasing. They compliment what Swanberg tries to do overall. The fonts, the colours, the touches such as text messages on screen and every so often getting a look at where Eddie sits in the red or black serve to immerse us.

Win it All wraps up a little too easily, and there’s a moment important to the story that is played for laughs instead of feelings that I think is a mistake, as it’s out of tone from the rest of the movie.

These minor problems are forgivable next to the towering accomplishment that is this satisfying, intimate movie; a line in the sand in an actor’s career.