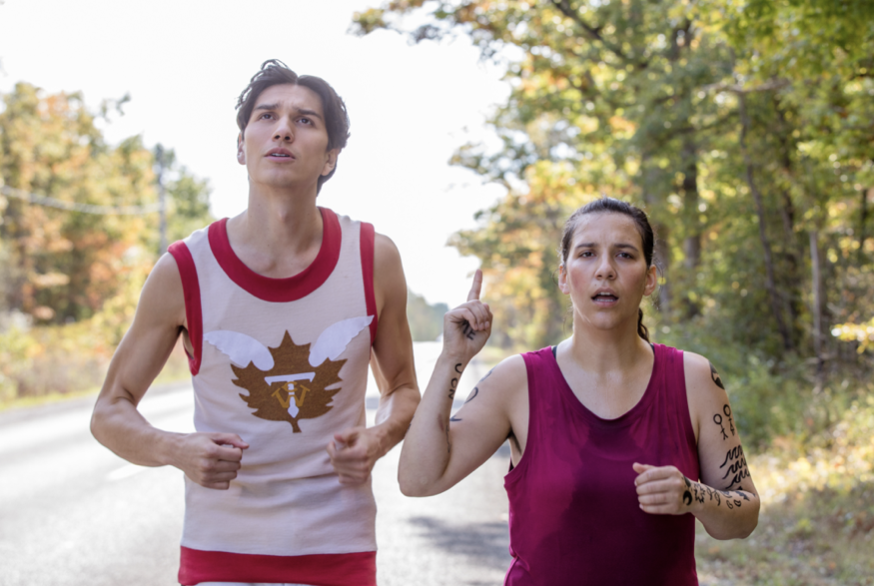 Modern society is engulfed by entire industries catering to our collective desire for self-improvement. Self-help books, online courses, diet plans…do any of these fulfill those same resolutions we make every new year? One could make the argument that the true and lasting motivations for change lie closer to home, intertwined with the lives of all those around us, both present and past. Exploring these themes with great care and attention is Run Woman Run.

After recovering from a diebetic coma, single mom Beck (Dakota Ray Hebert) is forced to confront years of unhealthy diet and absence of exercise (she drives to the mailbox!). Faced with a lack of faith from her family and still dealing with the loss of her mother (Alex Rice) from suicide, Beck struggles to muster the will to improve her situation. She ultimately finds inspiration in the unlikely and supernatural form of 1907 Boston Marathon Champion Tom Longboat (Asivak Koostachin), a ghost of marathons past.

As her unlikely kindred spirit trains her on the roads of the Six Nations Reserve, Beck begins to reconnect with her father (Lorne Cardinal) and young son Eric (Sladen Peltier) while forging a new connection with Jon (Braeden Clarkew), a city boy returned to the rez to reconnect with his roots. Along the way, she begins to collect reasons for her impending solo marathon, one reason for each kilometre.

Fresh off her invigorating 2017 feature Kayak to Klemtu, director Zoe Leigh Hopkins distinguishes herself in the Indigenous New Wave with a moving story that is as funny as it is heartwarming. She’s once again assembled an outstanding cast that elevates the material song with an ace crew to realize it on the screen. From a stellar script to winning performances to expert editing, the end result accomplishes the difficult feat of making you forget you’re watching a movie.

Exceeding in enthusiasm and excelling in craft, Run Woman Run reminds us that we are both our biggest obstacles and strongest allies. It’s the perfect uplifting experience to both end the current year on and enter the new one.