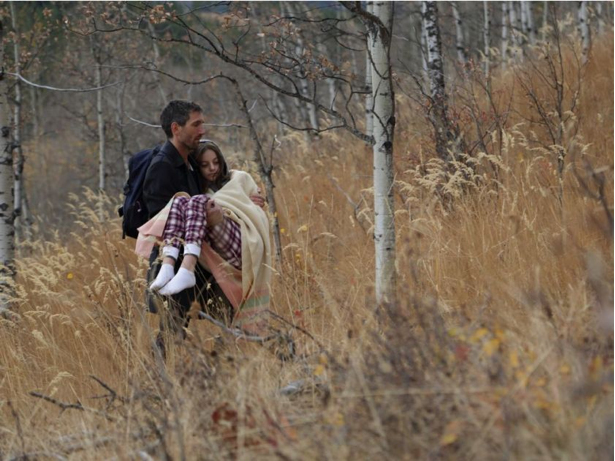 Is it more ethical for a doctor to “do no harm” to end suffering rather than force a patient to endure horrible, un-ending pain? Are we all trying to outrun our demons even if the effort to do so kills us? Uncomfortable questions to be sure, but ones you may find yourself asking after viewing Man Running. Recently screened at the Whistler and Calgary Film Festivals,  Alberta-based filmmaker Gary Burns’ latest work expands his canvas from urban angst to remote Canadian wilderness.

Medical Doctor Jim (Gary Rand) has entered the Grizzly Ultra, a gruelling 100-mile 24-hour marathon, despite health concerns relayed to the organizers by his wife (Sasha Barry). As Jim ventures ever deeper into the wilds of the provincial park, his thoughts begin to flashback to Robyn (Milli Wilkinson) a teenage patient who had asked him to euthanize her in order to escape  chronic pain, despite her parents wishes and existing laws to the contrary.

The marathon gets ever tougher as reality and fantasy begin to blur. Jim sees visions of his estranged wife and various participants seem to know a lot more than they should about Jim’s past This includes an outgoing, yet disturbed fellow runner (Ivana Shein) who Jim knows from previous marathons. The stakes are high as Jim struggles to keep a grip, but some things just aren’t meant to be outrun.

The first thing to understand about Man Running is that nothing can really be taken at face value. Characters (many un-named) speak in omniscient riddles, the setting becomes gradually absurdist (one of the marathon rest stops turns into a disco), and alternate versions of key events are presented to us.

I would normally roll my eyes at these proceedings (I’m not an “art film” guy), but a winning combination of sharp performances, crisp cinematography, along with some judicious editing managed to win me over.

The themes of freedom to end one’s own life and the limits of human exertion are solid fruit for this effort. Robyn is hopelessly estranged from her parents and only confides in Jim, much to her mother’s dismay. It’s quite heartbreaking to see someone so young devolved into a level of bitterness and cynicism normally reserved for those decades older. Jim is wracked with guilt over the decision to go through with the assisted-suicide and seems content to die from exertion in this gruelling marathon if necessary. He won’t let anyone in to share his pain, but lets on more than he realizes.

It really is a shame however that Burns didn’t devote a little more time to the dynamic between Robyn and Jim which is easily the most compelling relationship in the screenplay. Wilkinson is a winning presence here often outshining her adult co-stars. Robyn and Jim wrestling over the decision to end her life prematurely is juicy subject matter and could easily have made an even more compelling movie all on it’s own.

I suppose I can’t fault a movie for what it isn’t. It certainly helps that Man Running is wrapped up in a solid conclusion that may leave it’s audience with questions, yet oddly satisfied. It’s a challenging and rewarding work wrapped up in a 90-minute package, perfect for festival or home viewing. Recommended.

Man Running screened at the Whistler Film Festival is currently scheduled for a Spring 2019 release.