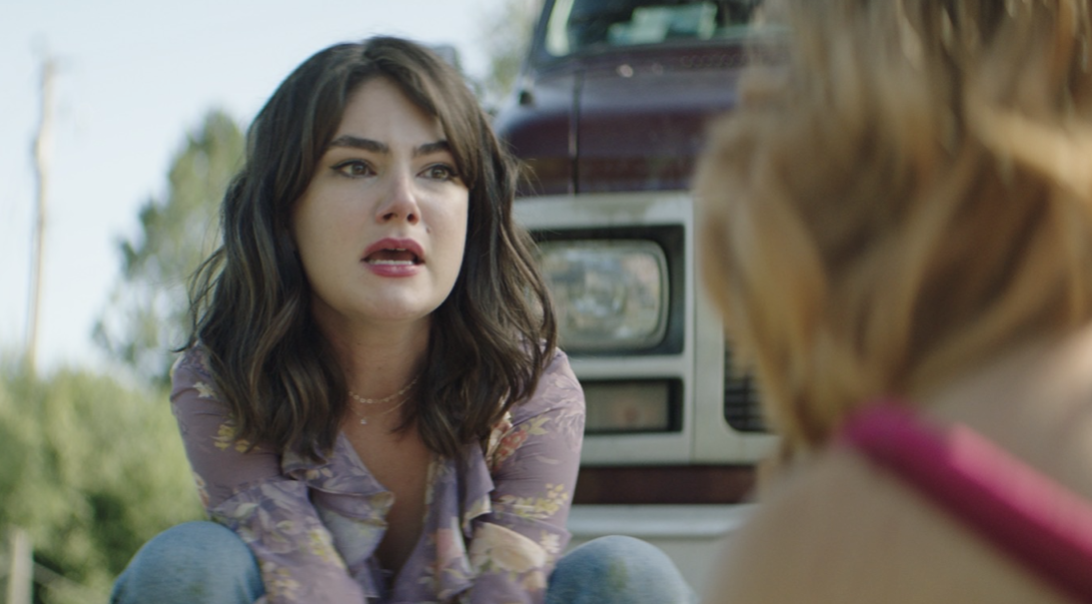 Unlike novels, films tend to have many authors, with multiple creative craftspeople leaving their mark on the final product under a unified vision. Nonetheless, some films are demonstrably more personal than others and this is abundantly evident in We’re All in This Together, an adaptation not only directed by and starring Katie Boland, but written and produced by her as well.

Thirty-something Finn Parker (Boland) is disturbed to find out via media interview that her mentally-challenged mother Kate (Martha Burns) has gone over discount-Niagara Falls in a barrel, becoming a viral sensation as she lies in a coma in hospital. Finn rushes back to her Thunder Bay hometown to be by her mom’s side and also attempts to patch things up with her estranged twin sister Nicki (also Boland). It won’t be an easy reconciliation given that Nicki had a son some years back with Finn’s then-boyfriend Gord (Adam Butcher).

Adding to the family tension is Nicki and Finn’s teenaged sister Paris (Alisha Newton) who fears her elder siblings may pull the plug on their mother should she not awaken soon. But when Kate does make a miraculous recovery, Paris speeds her away unannounced for an impromptu mother-daughter roadtrip. Nicki and Finn are soon in hot pursuit for a journey that will either bring this fractured family together, or fracture it apart for good.

Even for a seasoned critic like myself, this movie was a bit of a slog to get through. I’ve rarely seen an actor try as hard as Boland does here (who, to be fair, is decently convincing in her dual roles), only to come off as needlessly exasperating and abrasive. Every scene she’s in was uncomfortable to watch and often left my eyes drifting to the screener’s timecode, wondering how much more of this Oscar-reel bait I’d have to endure.

The rest of the cast is a mixed bag with Burns effectively portraying a woman with a mind adrift and Newton the sole cast member approaching anything resembling empathy for her character of Paris, whose subplot of being catfished is far more compelling than the under-cooked A-plot. A particularly egregious casting decision is that of Nicki’s son Berlin who is portrayed by Max Winter, an actor clearly on the edge of puberty playing a character written for a 7 year-old. With nearly every line delivered with cloying, wide-eyed innocence, the end result is far more creepy than cute.

Lofty in ambition, but underwhelming in execution, We’re All in This Together will doubtlessly charm the art house critics for its exploration of family dynamics amidst a mental health crisis while exasperating most general audiences with its pretentiously inept execution. For this critic, it was a slog to get through and your own time might be better spent driving to see your local majestic waterfall (just leave the barrel at home).