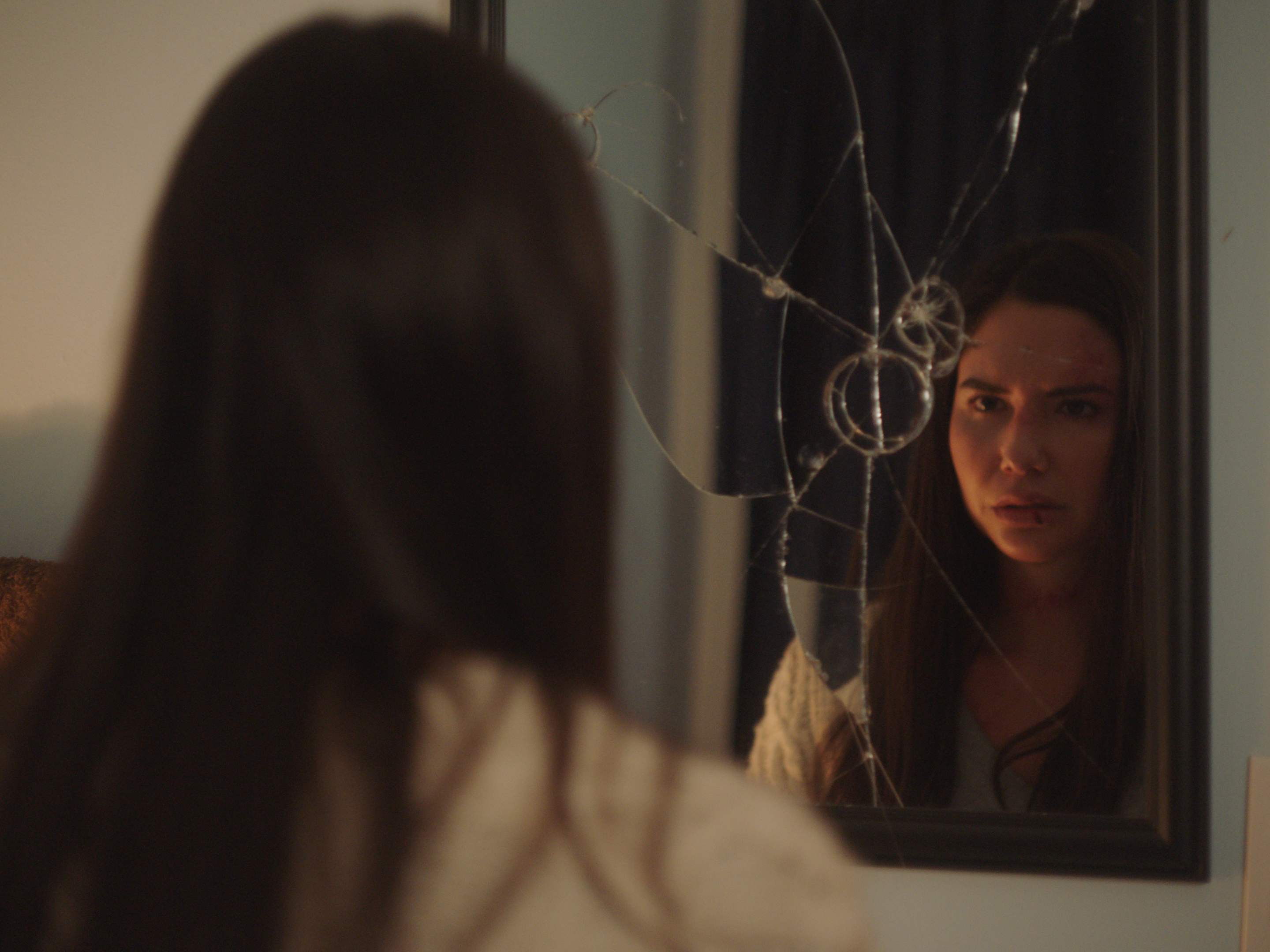 Made by Dr. Jules Arita Koostachin, Broken Angel is an intense film with a powerful message about so many things, family roots, PTSD, coming of age, and domestic abuse. Amazing how one movie can focus on so many subjects, and even be about Cree people. I’ve said it before, I’ll said it again, we need more of these kinds of stories, and it’s great more Indigenous films and First Nations directors are getting out there. This broken angel may not take a plane and finger paint the sky, but everything shines. By that I mean, everything about the movie. The story, the characters, the editing, and how everything was put together so well. Now let’s get into everything about Broken Angel. The film starts out focusing on Angel Bear-Child’s (Sera-Lys McArthur) family, who are struggling day to day way out in the countryside in the old Bear-Child family house (once owned by Angel’s parents). Angel’s teenage daughter Tanis (Brooklyn Letexier-Hart) is seeing a the ghost of a deceased woman named Gracie (Olivia Lucas) who would’ve been her grandmother. Gracie’s former husband Frankie (David Lyle), who is now in prison also seems to be seeing Gracie’s ghost. This also brings up flashbacks where we learn of both Gracie and Angel’s past. It wasn’t much better back then, with young Angel (Isla Grant) losing her mother who got horribly sick and fatally died. Back in the present day, Angel is living with an abusive new man named Earl (Carlo Marks) who has hit her a couple of times and drinks every single night even. But being the manipulative guy he is finds his ways of keeping Angel around without much change of his own behaviour and this affects Tanis as she thinks her mother needs serious help. It only gets more toxic when Earl learns Angel’s father Frankie is sending letters and finally after a brutal beating, Angel and Tanis decide to leave their home in the country side far away from Earl. After packing all of their essentials, and stocking up on food, the two split up temporarily. Tanis goes to borrow a neighbour’s (Blu Mankuma) car and Angel finally gives Earl a taste of his own medicine before packing up and going far far away. Tanis also gets her first period during the trip and decides to get in touch with her old family roots to celebrate her being a woman, but Angel doesn’t seem to want to look back because of her messed up past. Eventually when the Honda they are driving breaks down, they end up getting a ride unexpectedly from one of Angel’s old friends, a long-haired man named Joshua (Asivak Koostachin) who helps get them to a shelter for aboriginals where they can stay for as long as they need to. Angel struggles as she lives in this new home and tries to share her story with other first-nations people in order to overcome trauma but she is constantly reminded of Gracie whose ghost continues to follow her and try to help with reconnecting the family. Frankie manages to be released from jail while Angel and Tanis go to live with Joshua’s mother Dorothy (Jules Koostachin) who was also Angel’s foster-mom, but Angel has to learn to cope with all of her troubles if she is going to get herself and the rest of her family out of this mess for good.

Broken Angel has a lot of subjects as we know, and while lots of them are common in films, it’s not often they’re brought together in a chilling but interesting combo like this. The characters all have different stories and they all go through different problems while some even share the same problem, and we can see just how much these problems affect them whether they happen in the past or present. The colours are a dark and very minimal that adds to a good artistic touch to the darkness of the film, and eventually increases in colour bit by bit at the end. A film that was perfectly presented, and I do hope that everyone prescribes to this great new medicine Dr. Koostachin offers. By medicine I mean great info and great story that she has put together in Broken Angel. Indigenous women are great fighters, and that’s what this film shows. We can all fight for the right thing if we try hard enough, and let’s show some support for the Indigenous as well as they continue telling their stories.