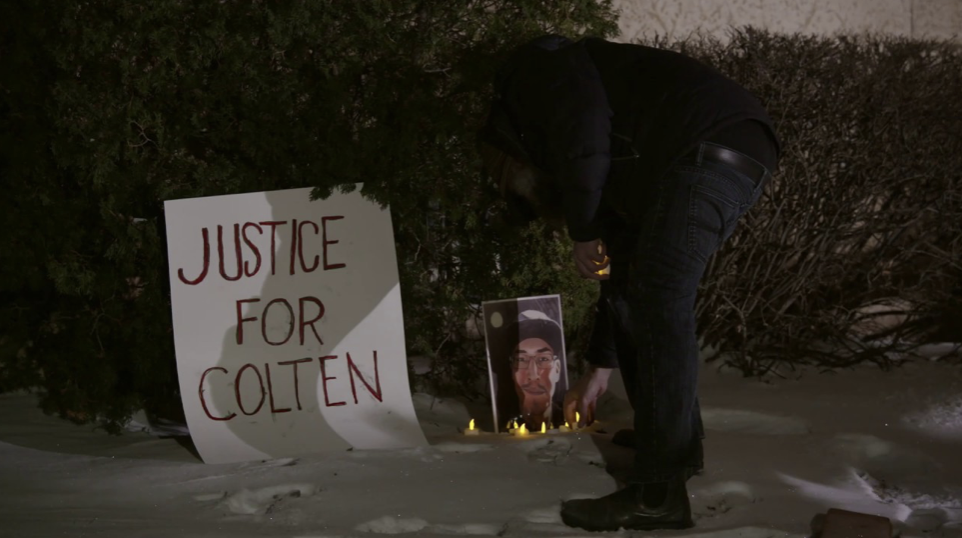 Nearly all of Canada was rocked in August 2016 when 22 year-old Colten Boushie of the Red Pheasant First Nation was killed via bullet to the head on a farm in rural Saskatchewan. The country was rocked yet again when Boushie’s killer, farmer Gerald Stanley was found not guilty of second-degree murder in a Battleford courtroom on Feb 9, 2018. The verdict sent a shockwave though the nation as the already contentious trial gave way to calls for change to Canada’s judicial system to address systemic inequalities that have failed the country’s Indigenous Peoples. Documentarian Tasha Hubbard re-tells the events of the trial and how they affected Boushie’s family and community in nîpawistamâsowin: We Will Stand Up.

Beginning with an introduction to herself, Hubbard relates how she was raised as the adoptive daughter of a homesteading family only gradually re-connecting with her Cree heritage when introduced to her biological father at the age of 16. Now raising two sons, Hubbard’s world was shaken along with the rest of Saskatchewan’s Cree population when news of Boushie’s killing by Stanley resulted in a torrent of online hate. Armed only with the knowledge that Boushie and his four friends had trespassed onto Stanley’s farm in an attempt to steal an ATV, many were convinced that Colten had deserved what had happened to him and that Gerald Stanley was well within his rights as a landowner to shoot the teen.

After a short summary of the events concerning signing of Treaty 6 and the harsh conditions imposed by the Indian Act out of Ottawa, Hubbard shifts her camera to Boushie’s family as they deal not only with relentless social media attacks on their dead son/brother’s character, but also their frustrations with the investigation of the crime (the scene was left uncovered overnight allowing key evidence to be washed away by rain), jury selection (any potential Indigenous jurors were challenged by defence counsel) and even the trial itself where harsh cross-examinations made it seem like Colten’s friends rather than Gerald Stanley were the ones being tried.

When the “not guilty” verdict is handed down, Gerald Stanley is promptly rushed out of the courthouse leaving a devastated Boushie family with no closure and shattered faith in a system they had trusted to bring justice. They are soon galvanized into action however as Colten’s mother Debbie, Cousin Jade and Uncle Alvin  take their case to the voices of power. From Saskatchewan Premier Scott Moe, to Prime Minister Justin Trudeau and even the halls of United Nations, seemingly no stone is left un-turned as the family and their supporters vow to not let Colten’s death be in vain and ensure that concrete changes are made to the systems that are supposed to deliver justice.

The wounds left in the wake of Gerald Stanley’s trial are still fresh with the acquittal having taken place little over a year ago. Hubbard has taken on some tough subject matter here but smartly eases in the uninitiated with a straightforward introduction to herself and her young boys before shifting to Colten Boushie. He is first established as a smart, capable young man who was always willing to lend a hand to friends and neighbours, painting a human face on what was once only a social media headline to most folks. As the tale of his killing and subsequent trial unfolds, the focus is kept firmly on the Boushie family and how they experienced the events. From harsh treatment by the RCMP  (officers showed up to Boushie’s house with guns drawn) to lack of communication from Crown prosecutors, we experience the family’s frustration as justice fails to be meted out at any level.

The drama unfolds via a deft mix of b-roll and animation. Hubbard also digs some of the hateful online comments directed at the Boushie family and displays them onscreen. While the names and dates have been redacted, the shocking vile and racist language remains for all to see. While we’ve likely all seen this scrolling through our phones before, it’s quite something else to see them displayed here and it’s certainly effective storytelling.

As with any contentious subject, claims of the documentarian being one-sided may be levelled by some. While that may be true on the surface, Hubbard’s main goal here is in fact to tell the story from the Boushie family’s POV. Their stories on how they were treated by police, the public and social media are heartbreaking and deserve to be heard. That being said, the film omits some key pieces of information that would have provided greater context.

Some time is spent on an allegedly flawed jury selection process where the handful of Indigenous potential jurors were excused due to challenges from the defence (they are allowed 14 challenges). Not mentioned is that an unusually large pool of 750 jurors were called indicating there was at least some effort by the court to have Indigenous representation on the jury. If most or all of those summoned had shown up (only around 200 did), there would have been far too many from nearby First Nations to veto. I also take some issue with the depiction of non-Indigenous farmers in the film. They are shown fleetingly, including a town hall where the emotionally charged proceedings depicts some of them at their worst. Missing from the film is the context of numerous break-and-enters and home invasions in the area by youth from Red Pheasant First Nation, some of these on reserve. This is not meant to excuse Stanley’s actions, but if we as a society need to shed our negative stereotypes of Indigenous People, it is not unreasonable to ask the same of the filmmakers when it comes to Euro-Canadians.

We Will Stand Up will be a tough pill to swallow for many.There is plenty of uncomfortable truths about our present and history that need to be confronted. While it lacks some key context at times, this film is a quality deep dive into a national tragedy and a good starting point for conversations that need to happen going forward.

Nîpawistamâsowin: We Will Stand Up is currently screening at theatres in Regina and Toronto until June 13