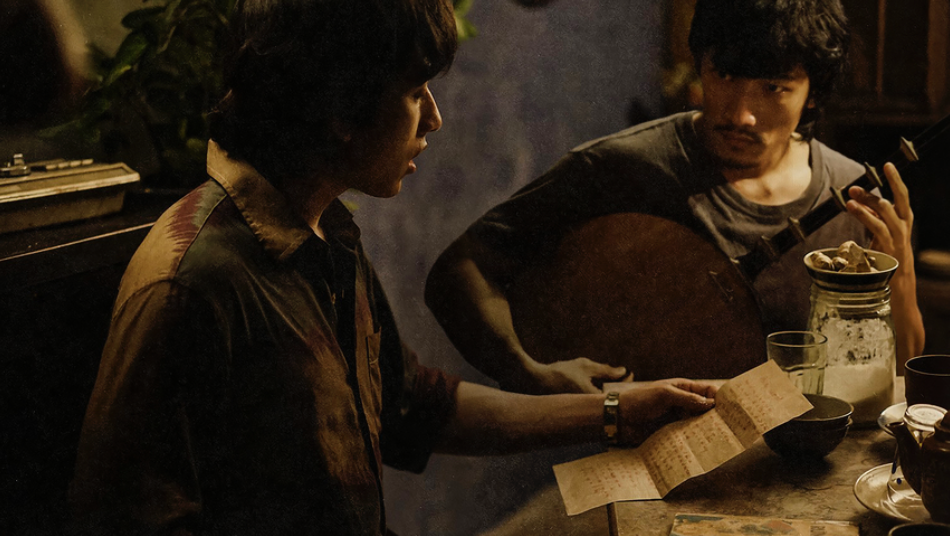 Aside from conspicuously rhyming with this reviewer’s name, the title of Leon Le’s debut film Song Lang refers to a musical instrument of the same name. An instrument that keeps the rhythm in an orchestra. This is explained to us via the opening narration of Dung “Thunderbolt” (Lien Binh Phat) who has found that his own rhythm has been off-centre ever since he was abandoned by his opera performer mother (Kiehu Trinh) followed by his musician father’s (Xuan Hiep) passing. Now introverted and shut off from any artistic impulses, Dung spends his days in 1980’s Saigon as a debt collector for the cold and calculating Auntie Nga (Phuong Minh) and is not above using harsh measures in order to extract re-payment.

The first real resistance to Dung’s methods arrives in the form of young Cai Luong opera star Linh Phung (Isaac) who stops Dung from burning his theatre troupe’s costumes and promises to re-pay the theatre’s debt himself. Dung can’t help but be impressed and when the two cross paths once again in a bar brawl, a friendship begins to form. As circumstances forces them to bunk together, the two young men slowly open up to each other. Dung has completely abandoned any artistic aspirations due to his traumatic past and Linh holds anxiety over his starring role in the Romeo and Juliet-esque production as he “has never been in love” according to one of his co-stars. Linh invites Dung to leave behind the thug life and join the troupe as a two-chord guitar player. But Dung’s checkered past may not yet be through with him yet.

From the above synopsis, you’d be forgiven for wondering why this film would be part of, let alone serve as the opening to a queer film festival. The truth is that Song Lang plays its romantic angles subtly. So subtle in fact that the same script could’ve been rendered as a tale of brotherhood. I confess I found myself waiting for something…well, gay to happen. But there’s no real physical intimacy between the leads to be found here. Any romantic subtext is displayed in the form of glances, body language and mostly from the changes in Linh’s mannerisms.

It’s largely up to Isaac as Linh to carry the emotional weight here as Lien Binh’s Dung shifts the gear firmly into neutral and leaves it there. Besides the odd moment of aggression and a single smile, the audience is mostly on their own as to what this guy is all about and it’s largely left to younger actors via flashbacks to help mould his character which is a bit frustrating since the majority of the first half is largely spent with Dung. Speaking of the first half, I can’t help but wonder if it was cut by a completely different editor than the second as many simple dialogue scenes are rendered a flurry of quick-cut coverage. This isn’t helped by mediocre subtitles that too often disappear before they can be read.

The film makes up for these shortcomings in it’s thoughtful scripting (many moments really clicked with the audience) and a beautiful rendering of 1980’s Saigon. The film is exquisitely shot in a 1.37:1 frame that invites you in to it’s warm palette. High marks for the detailed production design that handily evokes the period.

Leon Lee has produced a solid work here whose script might have benefitted from a more focused first act and a better lead actor. Song Lang is certainly a thought-provoking film but is still an odd choice to launch the Vancouver Queer Film Festival in this reviewer’s opinion.